Many thanks to NYSteelerFan4 for the Seahawks pick at #6. Seattle could definitely stand to add a player of Berry's caliber this draft season. Next up? Our beloved rivals from Lake Erie, the Cleveland Browns at #7. - Michael Bean (Blitz) -

Let's start off with a quick(ish) offseason recap. The Seahawks hired a new head coach and VP of football operations, and wouldn't you know it, they got one guy for both jobs, Pete Carroll. Coach Carroll wasted little time in making everyone aware that this is his team now. He traded back up quarterback Seneca Wallace to Cleveland, shipped DE Darryl Tapp to the Eagles for another DE Chris Clemons, signed several under the radar free agents, including LB Matt McCoy, RB Quinton Ganther, and former Steeler special teams ace Sean Morey. They also acquired former Clemson quarterback Charlie Whitehurst via trade with the San Diego Chargers. Pete Carroll also brought in several new coaches, including The "Godfather of The Zone Blocking Scheme" Alex Gibbs (who's draft history, as far as linemen go, can be found here), his O.C. from USC Jeremy Bates and new defensive coordinator Casey Bradley, With an all-time great, future Hall of Fame left tackle Walter Jones nearing the end of his career, and the release of starting safety Deon Grant, and what seems to be a continuous need for a solid receiving target, as well as a lack of a premier running back. With that kind of change over, in terms of players and coaches, there is plenty of different directions I could go with this pick. So without further ado...

With the sixth overall pick of the 2010 NFL Draft, The Seattle Seahwaks select: 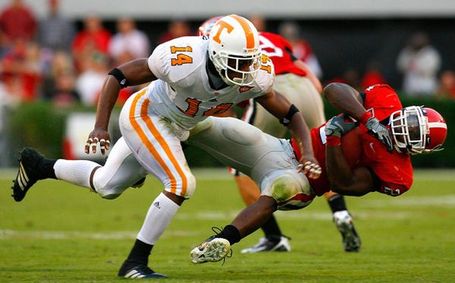 Eric Berry- The Incredible One

Well, there's not much left to say about Eric Berry. He's the most celebrated safety in this draft. His on field play at Tennessee has been nothing short of spectacular since his arrival in 2007. He made the High School All American game as a quarterback, transitioned to cornerback his freshman year, and then moved to safety the year after, all with out missing a beat. His uncanny knack for making the big play, whether it be a bone crushing hit, high flying interception, or big time stop at the line of scrimmage is second to none.

Seattle was targeting Jimmy Claussen until the team traded for Charlie Whitehurst. The fan base wanted Gerald McCoy, but his selection by Kansas City ruined that hope. Tackle is a need, but their offensive line coach has a solid history of selecting linemen later in the draft and making them into players. Running back is also a need, but that hole can be filled later in the draft, with players just as capable of holding onto a part time role. But with the release of Deon Grant, and his subsequent signing with the Giants, the Seahawks have been looking for a playmaker at safety for a few years, at one point going out and signing former Brown Brian Russell. This drafting gives them the playmaker they want and a defensive player Pete Carroll, a former defensive backs coach, can mold a defense around for years to come. And paired with last year's first round pick, Aaron Curry, this defense, and it's combination of playmakers, solid contributors, veterans, and young potential, could be poised for greatness with just a few more additions.