BTSC Daily Six Pack - He Who Is All Smiles Edition

Share All sharing options for: BTSC Daily Six Pack - He Who Is All Smiles Edition

IX- Any list that has Tony Romo above Ben Roethlisberger is a joke in my opinion, but Philly sports writer Paul Domowitch believes Ben is the 8th best QB in the league.  Can somebody explain to me how Tony Romo is a better QB than Ben Roethlisberger (off field issues not considered)?  Better yet, if you had to start a team would anyone really pick Tony over Ben?  I would love to hear the reasoning behind that, because I do not get it.  Anyway, I digress.  If this list is based on just numbers it makes sense, but if you had to have one of these QBs as your  leader it does not.  In that case, I would probably put Ben around 4th, with Manning, Brady, and Brees above him.

X- If you are curious to know what players are visiting the Steelers for a pre-draft workout check out this list.  You are allowed to bring in a total of 30 players for a workout, but I believe that does not include "local" players.  Oddly enough, Dez Bryant is one of the names on the list to visit today.  If he fell to us, I would not be too excited to draft him considering we need talent much more at other positions.  On another note, Blount had a good work out with some good runs and he sucker punched 3 people in the face.  Just kidding. Any-hoo, we have 15 more days until the draft! 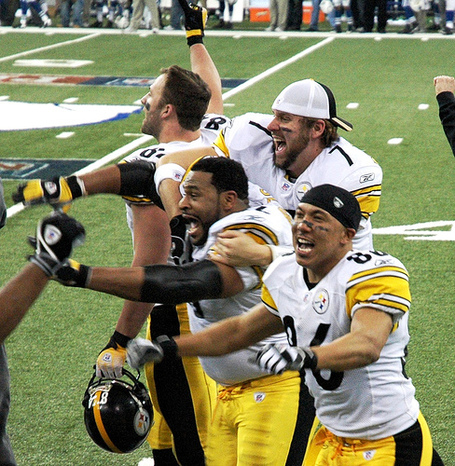 XIII-  Remember when we had that big fiasco between Hines Ward and Ben about the latter not playing following a concussion?  You know, then it exploded into a huge ordeal about the Steelers locker room being a big mess and that the Steelers would crumble into pieces and all would be lost.  At the time I thought it was Ward being frustrated and not thinking before he spoke.  I still believe that him and Ben have a solid relationship.  KDKA has a story out that supports my theory.  Ward is coming out and showing his support for Roethlisberger and Santonio Holmes in their legal battles.  Here is what he said:

I'm just there to support my teammates. I know they're probably going through some hard times and as being one of the leaders on the team, just trying to go out and have their back and show my support.

I like to see that from teammates.  It is not blind support in his innocence, but just being there for a teammate is huge.

XIV- Our football team might make a pretty decent basketball team by the end of the year.  I remember on Shaq vs. Ben Roethlisberger had a basketball court in his yard.  The rest of the Steelers just continue to play charity basketball games every other day.  In a previous six-pack, I mentioned that the Steelers played a basketball game to support child pediatrics.  This one is not a charity, but a fundraiser for Penn State Behrend.  No names of the roster were listed, but the price is cheap for tickets, $7, and the Steelers will be doing autographs and raffles.  You might want to check it out if you are in the area.  They are also scheduled to play the Pennsylvania State Police for another fundraiser..

XL- Dates and times were set for the preseason games.  Plan accordingly, so you do not have to watch a game on your honeymoon.

XLIII- Lets talk more about that great guy with the big smile.  Hines Ward spoke to the students of Banksville Elementary School about eating right and staying fit.  He got 200 children to pledge to eat breakfast every day and attempt to get 60 hours minutes of physical activity per week day.  Child obesity is a problem in the USA and getting athletes to show students the importance of eating properly and exercising can help the problem a lot.