I really don't think the Pittsburgh Steelers will draft Casey Hampton's eventual replacement in the first round of this April's draft. If Dan Williams from Tennessee were still available at #18, the Steelers might find him impossible to pass on, but more than likely, Williams will be gone somewhere around where he's being selected here in our mock draft. Good stuff from mojo88 here. Thanks. Next up? At #10, it's nlevine34, who will be drafting for a team I just love to watch lose - the Jacknsonville Jaguars.

Drafting this decade has not been kind to the Bills, with the exception of a couple of Pro Bowl running backs, in Marshawn Lynch and Willis McGahee. McGahee of course is no longer with the team, instead residing 275 miles south in Baltimore.

The Buffalo Bills need help all over the offense. Ryan Fitzpatrick is hardly an NFL calibre starter, but with Clausen and Bradford both of the board, there's no QB left with a first round grade. The other major need on offense is an offensive tackle, to take the place of Jason Peters who was traded to Philly. Help at WR may also be required if the Bills intend to step up this year, but the consensus number 1 receiver, Dez Bryant, throws up too many character issues, and had a poor showing at his pro day to deserve the number 9 draft spot.

On defense, the front seven need upgrades, however, the Bills appear set at the pass rushing OLB/DE, where they have Aaron Schobel, opposite last year's number 1 draft pick, Aaron Maybin. This year the Bills are moving to a 3-4 defensive front, but they lack the big space eating NT that forms the central clog of every 3-4 D. There is only one DT worthy of a first round grade who projects as a 3-4DT and that's Dan Williams, out of Tennessee. 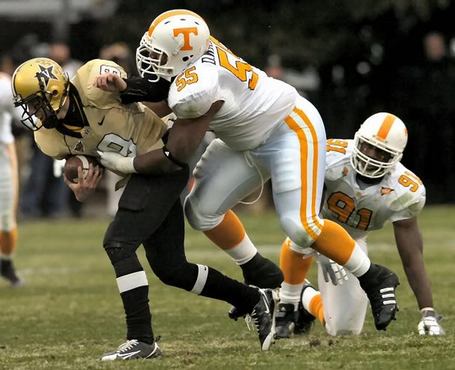 Updated first round picks after the jump.