Alright! People continuing to step up and deliver the goods in our 2010 BTSC Mock Draft. Many, many thanks to nlevine34 for the the thoughtful writeup and pick! Next up? My favorite late-season wilting pretender, the Denver Broncos at #11, represented by TheRebelMonk. - Michael Bean (Blitz) -

In their 15 years of participating in the NFL draft, the Jaguars have plenty experience drafting in the middle of the 1st round. The stats show that they have done fairly well with these picks as well. With 12 overall Pro-Bowls, one all-decade player (Tony Boselli), and a potential Hall of Fame running back (Fred Taylor), the Jags have shown that they have what it takes to draft quality players. Unfortunately, in recent years, they have drafted a few busts. Reggie Williams continues to underachieve year after year. Matt Jones could never really get over the hump from average 3rd option WR to an everyday starter. Derrick Harvey has only 5.5 sacks in his first two years in the league.

* In these years the Jaguars had two 1st round picks, the one posted is their earliest pick that year

So, Jaguars GM Gene Smith looks to continue to "right the ship" in his second draft after a great 2009 draft where the Jags got a lot of great value for all of their picks. After looking through several mock drafts, one of the popular picks for Jacksonville is WR Dez Bryant out of Oklahoma State. Most are saying that Jacksonville is thin at the WR position and that they need a true number one receiver. However, in my opinion, the emergence of 2nd year WR Mike Sims-Walker gives this run first offense a sufficient number one option. This, combined with Bryant's off the field issues is why Jacksonville will pass on the number one rated WR in this draft.

Other mock drafts propose that the Jaguars will trade down and draft Tim Tebow. This makes absolutely zero sense to me. The experts try to justify this move by saying that Jacksonville needs an attraction to sell more tickets and that Tebow fills that role. If this were the XFL, I might agree. However this is the NFL and winning football games is most important. Tebow is not the best option to improve the Jaguars as a football team. While he might sell tickets, the glamour will fade eventually, and Tebow is not a long-term solution to Jacksonville's problems. If the Jags wish to please Blitz and continue to lose football games, they will trade down and draft Tim Tebow.

Another option for the Jaguars that appears in many mock drafts is DE Derrick Morgan from Georgia Tech. Playing in the AFC South with great QB's like Peyton Manning and Matt Schaub (sorry Vince, not quite there yet) a good pass rush is a must have for the Jaguars. Morgan recorded 12.5 sacks his senior year at GT and is the number one ranked DE in the draft. Morgan's dominating pass rush would allow him to fit in perfectly opposite Derrick Harvey on the Jacksonville's defensive line. Morgan can make up for the lack of a pass rush that was expected from Harvey and will help the Jag's defense contain the great QB's of the AFC South.

While trading down to try and stock pile a few early round picks, in a draft where they only have two picks in the first 3 rounds, is an option, I think that the Jaguars will realize that Derrick Morgan's potential is too great to pass up.

So with the 10th overall pick in the 2010 NFL draft, the Jacksonville Jaguars select, Derrick Morgan, DE out of Georgia Tech. 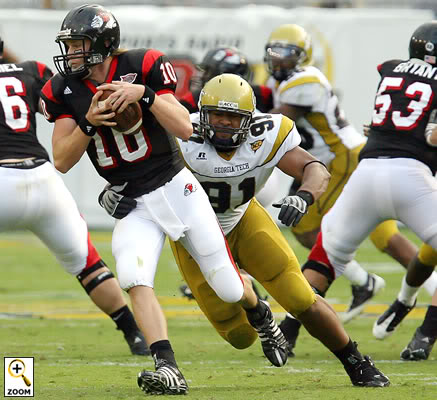