I like this pick a lot here for Denver. The Broncos could stand to add a vocal leader and tackling machine in the middle of the field like Rolando McClain. Many thanks to TheRebelMonk for the timely selection. Next up? The Miami Dolphins at #12, represented by longtime BTSC'er DwightWhite's Missing Tooth. - Michael Bean (Blitz) -

A sensible pick for the Broncos here would have been Brady Quinn 2.0 (AKA Jimmy "Pro-Style Offense" Clausen, if for no other reasons than their intangibles are almost all similar yet Clausen is supposed to be much, much better), if for no other reason than the hilarity of two mediocre Notre Dame quarterbacks being the potential future of their franchise at that position. Although who's really going to be surprised if both Anderson and Quinn turn out to be exactly what every Browns fan wanted once they're shipped out?

Anyway, that being said, the Broncos biggest issue is that they are completely unable to get off of the field defensively, especially against the running game. They've picked up Jamal Williams this offseason, which if he proves healthy will certainly bolster their attempts to successfully implement the 3-4 they wish to run. They also have two young OLBs in Jarvis Moss and Robert Ayers along with Elvis Dumervil who is an absolute beast against the pass but whose smaller size makes him less effective against the run. Either way, they seem to be set at the NT and OLB positions. However, DTs and ILB is another situation altogether. DJ Williams is currently listed as an ILB but is much better suited for the outside. As there are no DTs available (and really, those space eating, low glory players can be found in later rounds, i.e. Aaron Smith and Brett Keisel) worth this high of a pick, the smart choice has to be Rolando McClain. 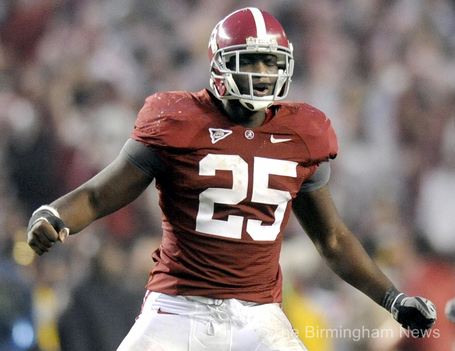 This pick will give the Broncos the run stuffing ILB they need. McClain's biggest weakness is against the pass, but he is a beast against the run. That makes him exactly the type of player that the Broncos need to win. With Kyle Orton at the helm, as a quarterback who doesn't make the big play, but also generally avoids the stupid plays, with a good running game in Knowshon Moreno and Correll Buckhalter, the Broncos could certainly turn into a team that keeps the game close with tough defense and the grinds the opposing team down with a strong running game. While it may not be in vogue in today's game to be a running team, it has certainly proven to be a winning formula. For them to complete this style, the Broncos defense needs to step it up. Shutting down the run is there main issue and the pick of McClain could go a long way towards helping their chances. His toughness and skill could immediately transform this defense into what McDaniels wants within the next two years.

Some other possibilities: Joe Haden (If he fills out his potential - a big if for CBs - with Champ Bailey, that's a scary one-two for a few years), Earl Thomas (Dawkins is an old player, that's all there is to it), Dez Bryant (All depends on the Brandon Marshall saga...).