BTSC Daily Six Pack - We Have Something to Prove Edition

Share All sharing options for: BTSC Daily Six Pack - We Have Something to Prove Edition

IX- Bleacher Report  wrote an article on NFL Teams that Have Something to Prove in 2010.  Of course, the Pittsburgh Steelers were thrown on to this list and I would not argue against them having to prove something this year.  I do not believe anyone would claim that 2009 was not a disappointment after huge expectations coming off an amazing year.  However, one sentiment in the argument bothered me:

QB Ben Roethlisbergers off the field issues continue to hurt the Pittsburgh Steelers and needs to shoulder a big portion of the blame.

The motorcycle accident definitely hurt the teams chances of winning that year (especially early in the season).  Granted, the appendicitis was unavoidable and probably would have off set the QB either way.  Anyway, the argument that Ben's off the field issues negatively affected this team last year is completely erroneous.  Ben is coming off the best passing year of his career!  I have a feeling that the Steelers are going to unleash hell here in 2010, but for really reals this time.

X- For the life of me I cannot figure out how to embed a video that is not from youtube.  Anywhow, Benstonium.com made another humorous parody of the Pittsburgh Steelers.  If you are a fan of Arrested Development you will enjoy this video.  If you have never watched that show you might not get it.

XIII- Well this news sounds promising.  Santonio Holmes's lawyer is claiming that he has evidence that proves his client's innocence.  He has not said what the evidence is, because it is part of an ongoing investigation.  I hope that his attorney is right, because I do not want this off field situation to hinder the chances of Holmes returning to the black and gold after this season.  Also, it would eliminate any chance of him being suspending for an indefinite amount of games.  From the beginning the story seemed a bit off, so I am leaning toward this case being thrown out before it goes to trial. 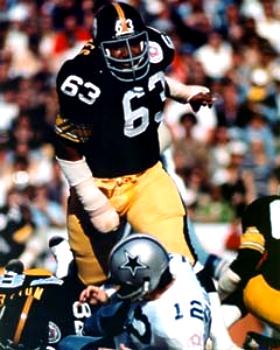 XIV- I do not often think that ESPN writes the best stories.  Generally, they are just pushing their writers to put out articles as frequently as possible at the expense of quality and accuracy.  However, I cam across a historical article on the Steelers today that I enjoyed very much.  I recall someone, possibly maryrose, in the wake of the current legal issues, talking about a former Steelers player that had shot at police officers.  I was not alive at the time and knew very little about the incident.  ESPN writers Chad Millman and Shawn Coyne have compiled a pretty indepth occurrence of what happened that day.  Some of it may be a bit speculative, but it still paints a good picture of what occurred that day with Ernie Holmes, some 37 years ago.

XL- I have seen the name Jimmy Graham pop up on a few mock drafts that I have looked over in this seemingly endless off season.  He is a tight end prospect who is converting from a basketball player based on his impressive physical ability, you know...just a 4.56 40 yard dash and 38.5" vertical (for a 260 pound guy).  Anyway, his name on a Yahoo Sports article caught my eye as I was searching for articles this morning.  Skip down to the section titled "True Adversity" and read.  That kid had a rough childhood, and whether or not the Steelers select him, I hope he has a very successful career.

XLIII- Well the picture caption game we did last Friday was pretty successful and fun.  Therefore, I am bringing it to you again.  Don't forget to rec the ones you like and don't cross that line.  And go.... 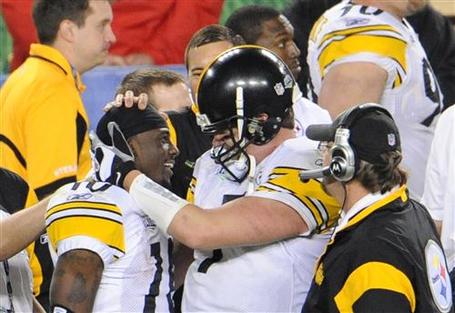