Thanks to longtime BTSC member, DwightWhite's Missing Tooth, for his selection for the Miami Dolphins at pick number twelve.  Certainly the Dolphins need help at on defense so this pick would fill a need, even though it is a little higher than I have seen him in most mock drafts.  But that is what makes the NFL draft exciting is that some guys rise and some guys fall on draft day and only the teams themselves truly know what they are thinking.  Up next is one of two first round draft picks for the San Fransisco 49'ers, being handled by __.58.__.  Frank Mineo- (DYM)

It seems you can't swing a big tuna down in Miami without hitting an area of need. With a suspect pass rush, a porous pass defense, an aging and drug-addled defensive line, a no-name wide receiving corps, and running backs on their final contract year, this will be an important draft for the future of the aquatic mammals.

After a surprising AFC East championship in 2008 and an equally disappointing 7-9 season in 2009, it is apparent that Coach Saprano and Bill Parcells have lots of work to do on both sides of the ball.

The Dolphins fired defensive coordinator Paul Pasqualoni and hired former San Francisco head coach Mike Nolan. Mike Nolan is definitely a better dresser than Paul was, but is it an upgrade? I don't know.

By far, the secondary's most glaring weakness was at free safety. Gone is free-agent experiment gone awry Gibril Wilson whose play bordered on William Gay-like throughout the season. The Dolphins whiffed trying for both Ryan Clark and Antrel Rolle.

Opposing tight ends killed the Dolphins like a Japanese fishing fleet. The defense gave up14 touchdown passes of 20 yards or more. They also broke a team record for yards allowed in the fourth quarter (140).

Gone too are linebackers Joey Porter and Akin Ayodele and pretty boy Jason Taylor looks to be heading to the Jets. Miami did add robo-tackler Karlos Dansby who will make a huge impact on their run defense, but be of little help with rushing the passer.

Aging defensive lineman Jason Ferguson is also a concern. The Dolphins signed him in March despite the fact that the 35 year old Ferguson will miss half the season due to his suspension for violation of NFL rules governing performance enhancing drugs.

The job at quarterback appears to be Chad Henne's. Chad Pennington is an able veteran back up. Pat White is their wildcat guy unless he gets his clocked cleaned too many more times. And then there's Tyler Thigpen.

But quick...who was the Dolphins leading receiver last year? If you said Davone Bess, you're a better man than I. Ted Ginn Jr. can be safely considered a bust on a receiving corps that combined for 6 touchdown catches last year (three by Ohio State rookie Brian Hartline). There is not a number one receiver on the team. The best receiver in Miami might be quarterback Pat White.

A game breaking wide receiver would certainly help Mr. Henne's development. With Brandon Marshall seemingly out of the question, the draft would seem their best bet.

On the ground, both Ronnie Brown and Ricky Williams are in their last contract years. Williams had an 1100 yard season, but he ain't getting any younger. And it Florida legalizes ganja, Ricky will be covered in Cheetos and watching cartoons all day.

Knowing you can't fill every need with the first pick unless another once in a generation player like Isaac Redman comes along, choices had to be made.

With the twelfth pick in the 2010 NFL draft, the Miami Dolphins select... 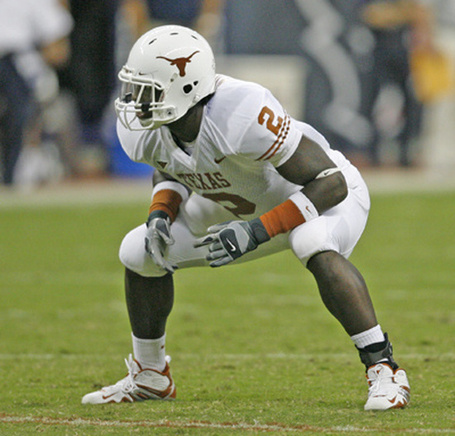 Other Fun facts about Sergio

· Sergio is the Spanish, Italian, and Portuguese form of the Latin name Sergius, which probably meant "servant," or "attendant," and is thought to be of Etruscan origin

· Treated for a concussion on 2009 after running his car into a building while texting. After the crash, the sneaky fellow pushed the car back into a parking lot and went home.

· Missed three games in 2008 after an arrest for a DUI. Performed community service which incidentally was his college major (Youth/Community Service).

· His favorite movie is the Nutty Professor.

· His favorite cartoon is Family Guy.

· His favorite actress is Tasha Smith (I had to Google her).

· Was used briefly as a running back in the Alamo Bowl.

Despite some questions about maturity, decision making, and an odd name, Mr. Kindle makes since for both Saprano and Parcells here. I don't like Jason Pierre-Paul who most think the Dolphins will draft. I think he has bust written all over him.

With Joey the Mouth gone, they do not have a pass rushing OLB and they get one here. And you can never have too many linebackers in a 3-4.

My guess is they pick up a wide receiver in the second round and a safety in the third.