IX- Ed Bouchette's weekly chat was back in full force after the NFL draft last week and Ed made a few interesting comments.  The one the was most interesting to me was his statement that "I'm not sure they will even do an extension with Mike Tomlin this year."  I personally don't see the logic in the not locking him up for another four to five years before the speculation on what his next move is.  I remember very vividly when Cowher was a lame duck coach all the controversy it caused and I would hate to see one of the best young coaches in the league take his "Tomlinsisms" to another city.  Consider this, only five current NFL head coaches have won a Super Bowl as head coach and if Mike Tomlin was to hit the market with his Super Bowl Ring he would be due a very, very large pay-day.

X- Bob LeBeau will be introducing his brother, Dick LeBeau, at the 2010 Hall of Fame inductions in Canton, Ohio on Saturday August 7th.  It should be interesting to hear what LeBeau's brother has to say about the legend and I was honestly hoping to see possibly a coach Cowher or even former player like Rod Woodson introduce LeBeau but its probably more fitting for him to have some of his own flesh and blood honor his achievements.  While everyone was in an uproar about Dermontti "Farra" Dawson jumping ship to help out the Cincinnnatti Bengals, many forget that Dick LeBeau has coached considerably longer in the Bengals organization that he has a member of the Pittsburgh Steelers.

XIII- After reading the following ESPN's off-season Power-Rankings where the Steelers were listed as the 19th best team in the league Rodney Dangerfield arose from his grave just to shout out that "The Stillers don't get no respect."  Seriously though the Carolina Panthers are a better team going into the season than the Steelers?  If nothing else this should be good motivation for the Steel Curtain Defense to rise again. 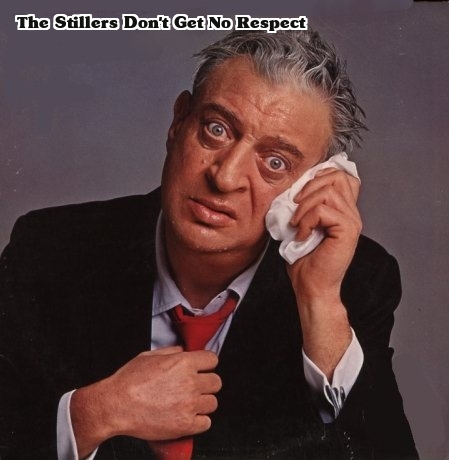 XIV-Speaking of people who don't get respect; Aaron Smith is frequently someone who is overlooked especially outside of Steeler Nation.  But the fact that Smith is currently in the top ten in Steeler History in all-time sacks certainly points to how unique and dominant a player he is considering rushing the passer is not near the top of his job responsibilities.  According to the article Smith is recovering very, very quickly especially for someone of his age and looks very much like he could come back and have another great season for the Pittsburgh Steelers, especially if Ziggy Hood can emerge to spell Smith & Keisel at times this season.

XL-Mike Tomczak was never know for his ability to escape pressure in the pocket, but perhaps he has been studying one Mr. Ben Roehtlisberger on the field and off.  According to multiple sources including the Tribune Review the recent charges filed against him have been dropped (insert standard Limas Sweed joke here).   Speaking of Limas, it is very possible that his career in Pittsburgh is over after he was waived this weekend and then cleared waivers after no team took a shot at him.  Yesterday he was put on Injured Reserve, ending his season and likely career in Pittsburgh.  It's very hard not to consider Sweed one the Steelers biggest draft bust in recent history.

XLIII-By now everyone is probably sick of hearing about Brian Cushing and his four game suspension for violating the leagues substance abuse policy.  As you have also heard the AP is conducting a re-vote on the Rookie of the Year award as well as a re-vote on the All-Pro voting for outside linebackers, which could actually have some impact on the Pittsburgh Steelers.   James Harrison narrowly missed the 2nd team All-Pro by a few votes and some if a few of Cushings' votes get re-distributed Harrison could likely hit some extra incentives in his contract.