After originally posting the entire interview with Hoge, it was suggested that it might make sense to break it into two parts. You can read Part 1 of our chat with Hoge here, which includes some information about the book he has written. It's titled 'Find A Way: Three Words That Changed My Life.' You can pre-order it on Hoge's website. Part 1 also includes some outstanding story telling by Hoge as he recounts the 1989 playoff run by the Steelers. Hoge was the catalyst of the improbable run to the Divisional Round of the Playoffs. As you most likely remember, Hoge nearly led the Steelers past Elway's Broncos and onto the Conference Championship Game against the rival Browns (who they would have beaten!).  Check out Part 1 first before continuing with Part 2 below.

Hoge on the mood around the organization when Noll announced his retirement plans, and what it was like making the transition to Coach Cowher  in '92 after such a long and successful run by Noll:

"You know, that change was pretty significant. Noll had been there not only the five years I had been there, my first five years, but what 22, 23 years, whatever it was? It was significant. And there was really a few weeks there, or few days, I forget how long, but there was just a lot of uncertainty at that time. And then when they hired Bill Cowher, I remember a lot of people were like I wouldn't want to be that guy. And in retrospect now, it was, yeah I would want to be that guy. He inherited a bunch of men that knew how to play football. We were young too. We were young and we didn't really have to be trained about how to play, we just needed a guy who's going to be able to understand our strengths and coach to those. Which he did. Like our offense for example. We were a physical, running team. And we had a tight end that could block. We were not a real vertical passing team. That's the kind of coordinator he got, Ron Erhardt. We catered to our strengths, we changed the game." 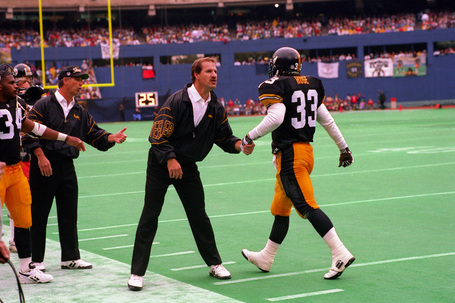 On how the Steelers personnel in the early '90s prompted the defensive coaching staff to tinker with implementing a zone blitz scheme:

"The zone blitz developed because of our defense and the coaching staff we had - Bill, Dom Capers, Dick LeBeau, and Marvin Lewis. We didn't have any dominant pass rushers, so that's how we came up with the zone blitz pressure. That's how the thought process started. We thought, we don't have a dominant guy, how can we bring pressure but not create vulnerability. We got Kevin Greene in free agency, you know what, it wasn't what we needed, he wasn't a dominant guy. But he was versatile enough that they just came up with the zone pressure, that's when they did it." 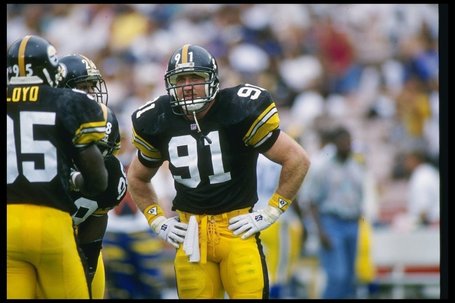 On playing for the Rooney family:

"I don't know if I've got the vocabulary to explain that family. Art, the Chief, Dan, they reek of class, they're fair, they're giving, they're genuine, they're stern and the reputation they have established, that organization, to be that consistent all these years, at the end of the day it speaks to the top, it speaks to how the Rooney's carry themselves, and the things they have done. It was an amazing experience."

On Big Ben being out of second chances, and what he admires about fans of the six-time SB champion Steelers:

"Ben has no more room for error, I believe he knows that, and I think Steeler Nation is clear that they understand. That's the thing about Steelers fans...I've tried to explain it, this may be the best example, it may be a bad way to kind of explain it, but they don't just know football, they believe in the game and what it can make you as a person. And part of that is how you carry yourself, the conduct that they expect, and how they want to be represented. They're not fans that are like, 'oh, we don't care what you do, whatever you need to do, we just want to win.' They're not the freakin' Black Hole, they're not the Raiders. They understand the depths of this game like no other fans. I've always said...I'm actually going back to Pittsburgh right now. Honestly, you'd think I'd won four Super Bowls there the way they treat me. I'm always like, how is that? I think I've finally got a grasp of it a little bit. This is all they ask, and don't get me wrong, they want to win, but if you lay it all out there on every game, they'll accept whatever results they get. Most times you do that you're going to win, but they accept that. And they know it. You can't fool 'em, you can't go out there and play half speed sometimes, then full-speed at others. They'll figure you out in a heartbeat. They know. And I've always respected that about the fans. And honestly, and this goes all the way back to what the Chief started, they expect you to give back. I don't want to say expect, that's the wrong word. They give you so much that how can you not give back? And when you don't they're like, 'whaaaat?' I get that. The Chief was like that, Art's like that, Dan's like that, Chuck Noll was like that." 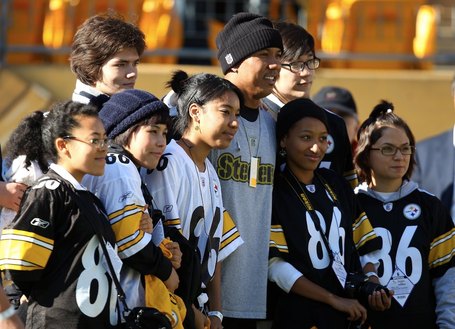 On if he thinks that Ben's suspension will prompt the Steelers to run the ball more, and if he thinks Bruce Arians will limit the playbook significantly for either Dixon, Leftwich or Batch:

"Well, they lost that element a long time ago. Listen, Rashard Mendenhall may be the most physical runner in the game, he's just got to get enough touches to do it. So I don't think there's any question. I think they're going to do it no matter what, even if Ben is in there. Charlie Batch has been in that system as long I believe as Ben, and Dixon in his third year, there's some things he hasn't seen and hasn't done, and they might limit him a little bit, but not as if he was a rookie. So, they may shave a little bit of it off, but they shouldn't have to shave much." 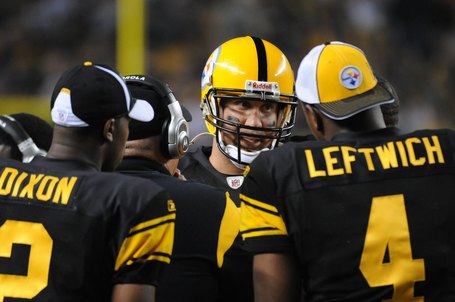 On if he thinks the Steelers can reclaim the top spot in the AFC North this year or if he thinks either Cincinnati or Baltimore will win the division:

"Oh no this division to me, those three teams are about as even as they come. I think they have as good a shot as the Bengals or the Ravens."

On his post-football career as an NFL analyst for ESPN, and on what similarities there perhaps are between the way he approaches his work today and the way he prepared as a football great:

"Everything I learned in between the white lines I've applied to this field, and any other field I'd get into. I have had to be as prepared as you could possibly be in order to be successful. And that requires a lot of diligent work, and a lot of dirty work. You know, watching tape for 10, 11 hours a day for four or five days is technically not that fun after awhile. Because it's hard. But it's the only way to find out the truth, and then bring that to the viewers. It's the only way. With that process, I've learned that just pays off. You do all of that, you apply it, fans start to resonate with that. But I've enjoyed it too. I sure don't feel like I used to on Mondays anymore. That's one thing that's different." 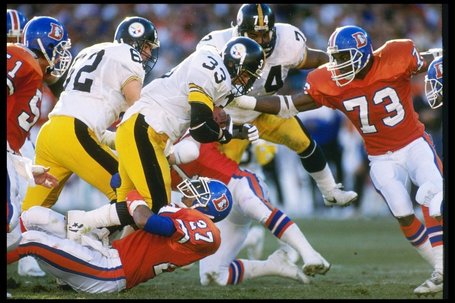 On the possibility of him getting into coaching someday beyond the Youth League that he's currently involved with:

"I'd never say no to that because it's something I've always felt was in my blood. And I just enjoy teaching. Chuck was just such an impact, that listen, if I could impact somebody like he has in my life, oh man, jeez. Just think about that if everybody impacted someone else for the greater good of a human's life, just think about what that would do for this world. So I have thought about that, a lot of different aspects."

Many thanks again to Mr. Hoge and be sure to check out his book project on his website, www.merrilhoge.com

Cheers as well to Mr. Friedman for striking up a conversation with Hoge and lining this up. Was fun to do with you, my man.