Quarterbacks- While some may say that you might want to look at Byron Leftwitch, Dennis Dixon, or even Charlie Batch to hold down your fantasy team during weeks 1-4 (and possibly 6 and 7), I think you are better off staying clear of whomever is throwing the rock in Big Ben absence.  The Steelers are likely to lean on their running game with Ben out and with a weaker receiving corp than last year; I wouldn't put my fantasy success in the hands of any of these guys.  I think Ben Roethlisberger on the other hand could be a decent option if you can find him late enough in the draft, especially if you have one of the top QB's like a Manning, Breese, Schaub type you could steal Ben to cover a bye-week and then offer him up as trade value. 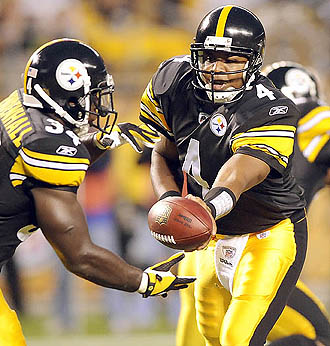 Bottom Line: Stay clear of the Steelers QB's, but do keep an eye on Roethlisberger if he starts to slip, as he could be a nice complimentary QB or even solid trade bait.

Running Backs- I think Rashard Mendenhall will be off most draft boards during the first round and as the season approaches I expect the buzz on him to heat up even more, possibly having some reach for him as a top five running back (which I think he could very well end up a top five back fantasy wise as the end of the year).  Outside of Mendenhall I don't see Frank Summers, Issac Redman, Mewelde Moore, or Jonathan Dwyer getting enough touches consistently to be worth anything, unless Mendenhall has an injury.  My long shot pick-up is possibly Stefan Logan, word around the OTA's is the Steelers are seeing what Logan possibly has in terms of lining up in the backfield.  With Mendenhall being the team's workhorse Logan might find his niche as the change of pace speed back.  While it is certainly a long-shot and he could even find himself unemployed in Pittsburgh if Logan got 10-12 touches per game in the offense and maintains his job as the primary return specialist he might be an interesting value. 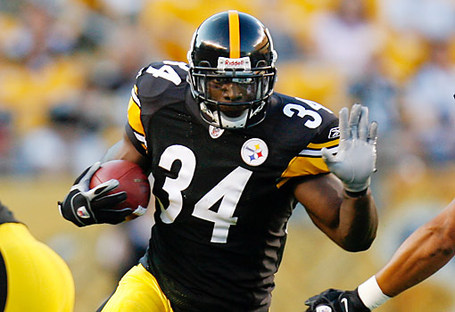 Bottom Line:  I put Mendenhall as one of the top players at his position and if you are sitting at the bottom of round one and he is still around you need to grab him.  Also, keep an eye out for how Logan progresses during training camp and the preseason, if he is on the roster and supposed to get touches at RB he might be worth taking a flyer on.

Receivers-  Hines Ward is probably the best buy in the Steelers receiving group but he is another year older and without Ben throwing the ball for four weeks his numbers are likely to not be as dynamic as last season.  I think Mike Wallace is a player that a lot of fantasy folks are way too high on, while I could potentially see Wallace having a decent season, I think he will have quite a few games this season where he will be shut down completely.  I don't think there is much reason to have any faith in Randle-El, Battle, or any of the rookies in terms of fantasy value.

Bottom Line:  I would steer clear of all Steelers receivers unless you find Ward or Wallace slipping way past their Average Draft Position,

Tight End-  I think Heath Miller is due for a big season.  With the Steelers looking to focus more on the run and with the loss of Santonio Holmes I see Miller looking at a career year.  Last season Miller had 76 catches, almost 800 yards receiving and 6 touchdowns.  I would expect a similar stat-line from Miller.  Miller will be more valuable in a PPR league since he gets a lot of touches but not as many touchdowns as some of the elite tight end's in the league. 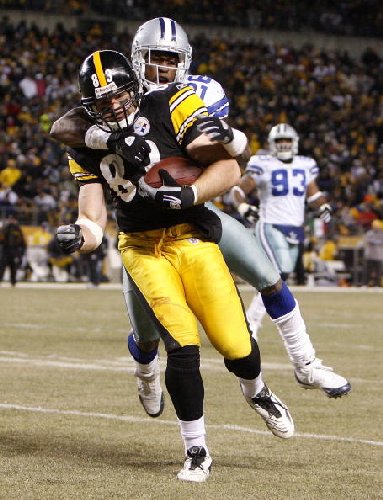 Bottom Line:  I never suggest taking Tight Ends very early so Miller might be a quality player to target after the upper echelon of Tight Ends are off the board. Having said that, Miller's not a player I would reach for, let him fall to you.

Defense-  With a healthy Troy Polamalu back in the mix and Aaron Smith looking like he is on a solid path to recovery the Steelers defense should be top five in the league in defense.  The secondary is still a question mark so interceptions may be something the Steelers struggle with again this year like they did last year. 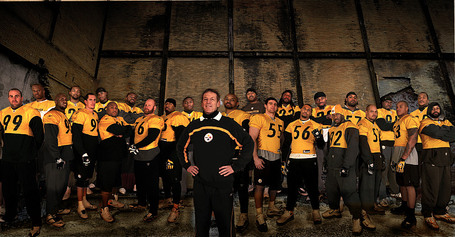 Bottom Line:  Some donkey in your league is going to draft the Jets defense with their second round draft pick, if you can find value in picking the Steelers do so, but don't be the guy who drafts a defense too early.   There is usually one or two surprise defenses that end up being studs that go undrafted, so don't worry too much.  One tip I like to use is look for a defense that has a bye-week early on in weeks four or five.  This way you can get your bye-week over with quickly and use the roster spot for second defense on a more important position.  The teams that have a bye week in week four are the Cowboys, Chiefs, Vikings, Buccaneers; the teams that have a bye in week five are Dolphins, Patriots, Steelers, Seahawks.

Some light reading on a sleepy Wednesday afternoon.  I think the Steelers are a team that won't be nearly as exciting in terms of fantasy as they were last season but there are still some quality players to be had.  What do you think about the Steelers fantasy outlook and the fantasy outlook in general BTSC?