Comcast has generously agreed to support the best NFL community around -- us! As part of that effort, between now and the end of the 2010 NFL season Comcast will be sponsoring a variety of special editorial and interactive features on our site. They begin today with the launch of the Comcast HD War Room, your weekly destination for key draft insight and opinion.

Let's get our minds off Big Ben and back on football by continuing with our breakdowns of each and every positional battle that will sort itself out when the Pittsburgh Steelers open their 2010 training camp in Latrobe, Pennsylvania. We began with the quarterback competition, now let's move on to one of the few positions on either side of the ball where there's not a whole lot at stake come training camp - the tight ends

The depth chart at tight end hasn't changed since former Purdue grad Eugene Bright was signed to the Steelers' practice squad in late November of last year. When Sean McHugh, the team's third TE in 2008, suffered an injury last summer, rookie David Johnson took advantage of earned a helmet as the team's third TE behind Heath Miller and Matt Spaeth. Will Johnson be able to hold off McHugh again this year? Or is that even the only possibility for change in the depth chart? Could Johnson or McHugh supplant Spaeth as the No. 2 TE? As uncomplicated as the situation at tight end is, there are I suppose a few potential developments that could surprise us in the coming months.

That would be Heath Miller, the Steelers' first round draft pick out of Virginia in 2005. The Steelers could easily have decided to wait to see how the pending labor situation unfolded rather than offering Miller a lengthy contract extension last summer. Because of the expiration of the previous Collective Bargaining Agreement, Miller would not have been an unrestricted free agent at the end of the 2009 season, his fourth year in the league. Instead he would have had to accrue at least one more year, meaning the Steelers could have likely retained his services for less money in at least 2010.

Miller certainly repaid the Steelers for their act of good faith last season. He posted career highs in receptions (76) and receiving yards (789), and his six TD receptions matched his second highest total set back during his rookie season in '05. Miller was particularly productive in the early part of the season, hauling in 34 receptions and 4 TDs through the Steelers' first six games.

Though Miller missed two games due to injury in 2008, there's no reason to think he won't appear in and start 14-16 games again in 2010. And while he may not exceed his statistical outputs from a year ago, it's not inconceivable to see him setting new highs in '10, if for no other reason than that he may see even more opportunities now that Santonio Holmes is no longer on the squad.

Contending For The No. 2 Role

There's a running joke in Steeler Nation about how offensive coordinator Bruce Arians loves him some two tight end sets. Because Arians prefers single 'back formations (no fullback), an additional tight end is often used for blocking purposes. Unfortunately, the Steelers offense hasn't had much success utilizing Matt Spaeth effectively in the myriad snaps that he's on the field. In other words, if you're going to play Spaeth on so many plays, might it make more sense to actually force defenses to account for him when the Steelers do pass rather than run? I'm not sure, I don't have gobs of film available at the moment to analyze to see how he's used. But despite playing in all 16 games last year, Spaeth had just five receptions. One resulted in a TD in Week 1, but after that, Spaeth was mostly invisible. 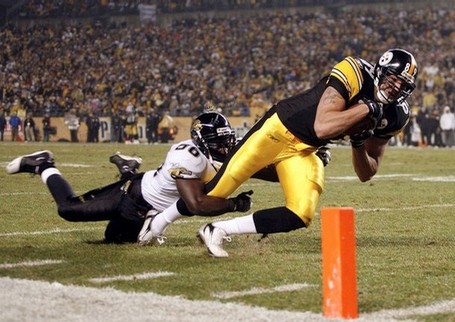 Spaeth showed his ability as a pass-catching tight end when he started in place of an injured Heath Miller for two games during the '08 season. He snagged 6 passes in each of the two starts for a combined 108 receiving yards. In the event of an unlikely and unfortunate injury to Miller, Spaeth could be entrusted to at least know his assignemnts and make the occasional play thanks to having been in Arians' system for all three of his first professional seasons.

If Johnson was hoping to supplant Spaeth has the No. 2 TE on the roster, he has to be disappointed with how his spring has materialized thus far. Johnson has reportedly dropped quite a few passes during OTAs this past month or so. Not good. That said, his utility for the Steelers would lie in his blocking ability, not being a playmaker, so if he can have a strong camp once the pads go on, there's still hope for him to make an impression on Mike Tomlin and Arians.

He probably should be more worried about retaining the No. 3 role rather than having any ideas of rising the ranks of the depth chart. Despite his struggles this spring, Johnson has seen more reps than has McHugh or Bright.

Not sure what to say about McHugh other than you have to feel bad that he suffered an injury when he did a year ago. Had he not, he most likely retains his roster spot over Johnson last season. Used essentially like a FB in 2008, McHugh now faces extra competition from the likes of Tank Summers and even Jonathan Dwyer.

Who do you think makes the final cut - Johnson, McHugh, Bright? I suppose we got an idea of what the Steelers perceive Spaeth's value to be when they offered him the lowest tender possible this winter. I still would imagine he makes the squad though. He's cheap, he's familiar with the playbook and he's the best pass-catching option behind Miller. Johnson could have the edge despite his struggles this spring due to the fact that he's demonstrated a toughness and physicality in the running game. If the Steelers are in fact serious about running more this year, they might be wise to have Johnson in the mix.