Comcast has generously agreed to support the best NFL community around -- us!  As part of that effort, between now and the end of the 2010 NFL season Comcast will be sponsoring a variety of special editorial and interactive features on our site.  They begin today with the launch of the Comcast HD War Room, your weekly destination for key draft insight and opinion.

Yesterday the Steelers locked up the first receiver they took in the 2010 NFL Draft and today it is being reported that they have locked up 6th round draft pick, Antonio Brown.  Brown has been one of the stars of this springs' practices in shoulder pads and shorts, and few reports have said he looked sharper than third round pick Emmanuel Sanders.  Brown's deal is reported to be for three years and included a relatively small signing bonus of just $73k.

In his final season with the Central Michigan Chippewas Brown had over 100 catches and over 1000 yards while racking up nine touchdowns.  Antonio is not the prototypical size for a NFL receiver at 5'10 and 180 pounds but hopefully he will be able to provide a spark to the return game as he was a two time MAC special teams player of the year.  The signing of Brown leaves first round pick Maurkice Pouncey, second round pick, Jason Worilds, fifth round picks Chris Scott, Crezdon Butler, Sylvester Stevenson and sixth round pick Jonathan Dwyer left to sign. 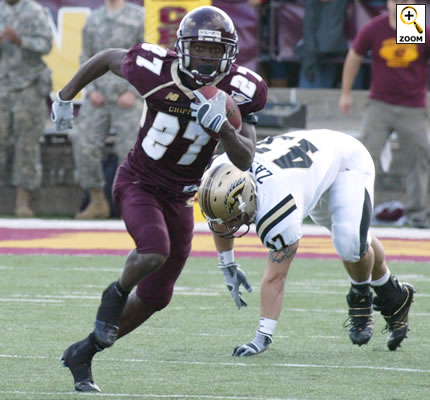