Sponsored Post: This post is presented by Sprint. Bringing you the first wireless 4G network from a national carrier. Only on the Now Network. - Michael Bean -

IX-Yesterday the Pittsburgh Steelers officially signed four draft picks, including wide receivers Emmanuel Sanders and Antonio Brown that were previously reported here at BTSC.  The other two picks that were signed were fifth round draft pick Sylvester Stevenson, a linebacker out of Utah who lead his team in tackles last season, and sixth round soon to be stud Jonathan Dwyer from Georgia Tech.  Maurkice Pouncey, Jason Worilds, Chris Scott, and Crezdon Butler are the four Steelers left to sign.  In addition to this the Steelers released seven players yesterday.  The players that were released were Jason Chery, kicker Piotr Czech, linebacker Derrick Doggett, punter Adam Graessle, nose tackle Cordarrow Thompson, center Bradley Vierling and cornerback Trae Williams.

X-Book your Hotels, Flights, and reservations at either Sharkey's or Dino's because Steelers training camp starts on July 30th and runs all the way until August 20th.  The first open practice for fans begins on July 31st and the night practice that is held at Latrobe high school is on Friday, August 6th at 7pm.  I will definitely be making my way up to Latrobe for a long weekend full of Steelers practices, beer, and fun.  Who's coming with me? 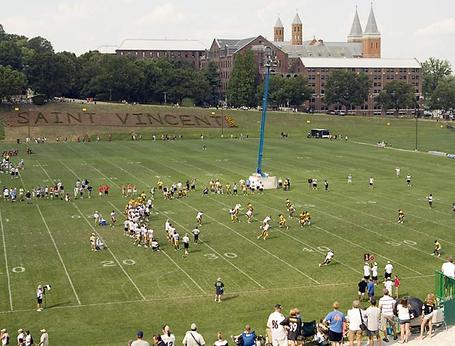 XIII-Last night the L.A. Lakers tied up the series with the Boston Celtics in what is becoming a must watch series (just about the only one of the NBA playoffs so far).  Anyways, Deadspin has developed a partnership with former NBA referee and convict, Tim Donaghy.  Donaghy has been writing a critique of the NBA Finals referees after each game of the finals and each game is more scathing than the last.  Game six is not up yet, but here is a link to game one, game two, game three, game four, and game five.  Pretty interesting stuff and even in you don't buy into all of the conspiracy theories that Donaghy throws out, it's hard not to see how much the referees impact these games.

XIV-Many times it is said that you can not truly judge a teams draft in the NFL until at least three years out.  One website, NFL Mocks sent me a link since they are doing exactly that, except they are grading out the 2006 NFL draft for each team in the NFL.  I remember exactly where I was during that draft as a good friend of mine was getting married and in between the ceremony and the reception I snuck into a bar to try and see the Steelers pick.  I was disappointed when I saw that the draft was only on pick 25 and the Steelers wouldn't likely be up until after I had to head over for the reception.  Then it happened, the Steelers moved up and grabbed one of the most electric receivers in the draft, Santonio Holmes.  I vividly remember my excitement and ultimately that draft will go down as one of the Steelers worst in recent memory now that Santonio is off to New York.  Coming off Super Bowl XL and grabbing one  of the most exciting players in the draft, April 2006 sure was a great time to be a Steelers fan.

XL-Last year I briefly mentioned a story about a Steelers player, Martin Nance, who was participating in the NFL's Business Entrepreneurial Program.  The program is taught in conjunction with the Wharton school of business to help train NFL players for life after football.  Steelers player James Farrior participated in this years program learning valuable information how to approach business opportunities.  In addition to that current Steelers Hines Ward and Charlie Batch are participating in a portion of the program that helps show players what it takes to get into the broadcast booth on Sundays.  Batch's participation might shine a little light into everyone's prognostication that Batch will eventually wind up on the sidelines as a coach, when he could be looking at a more relaxing career in broadcasting.

XLIII-I have been a Blackberry guy for about three years now, I loved my curve and eventually bought a the first version of the Strom when it came out.  I have been due for an upgrade on my phone for sometime and was looking for a new blackberry, and doing the research their just wasn't any new products that really attracted me, so I finally decided to go to the dark-side and look at other brands.  I ended up purchasing an HTC Incredible which is a Google Andriod product and I have to say, I am blown away.  What kind of phones are BTSC folks using these days?  I-Phone, Blackberry, Android?  This was totally off topic and I don't really have a link related to it, so check out a video of Jerome Bettis giving his advice to Big Ben.