IX-Nick Eason was set to be one of the key reserves for the Pittsburgh Steelers defensive line this year especially with the retirement of Travis Kirschke this off-season. Unfortunately for Eason he was recently hospitalized and had two surgeries to remove his appendix and part of his colon.  The second surgery to remove part of the colon was because Eason had waited so long to have his appendix removed that bacteria began to seep into his colon.  The Tribune Review reports that Eason is targeting the beginning of training camp to be back on the field even though the hospitalization caused Eason's weight to drop to 285.  Last season he was listed at playing at 305 pounds, so he essentially lost around twenty pounds.  Eason says hopefully this will be a blessing for him in terms of eating better and playing at a lower weight.  This could be a bigger story line than we currently are thinking, as Eason's roster spot is certainly not guaranteed especially with young Ra'Shon Harris waiting in the wings.

X-We talked about the Pittsburgh Steelers camp that was being held in Mexico City a while back here on BTSC and now Blog n' Gold and Steelers.com have reports on how the event went.  Both reports make it sound like the event was a major hit with 500 kids participating in the camp itself and an estimated additional 1,000 onlookers taking photographs and just their to look on as Mike Wallace, Ziggy Hood, Daniel Sepulvada, and Keenan Lewis worked with the young kids teaching them football fundamentals.

XIII-ESPN 1250's Ken Laird did a position by position roster breakdown from his vantage point breaking each position into players that are a lock to make the squad, players that are likely, and then question marks.  His breakdown is very similar to BTSC's reader and contributor barnerburner's excellent post from last week.

XIV-Steelersgab has a listing of the top ten players that Steelers fans love to hate.  One notable person that he left off the list was Cowboy's cornerback Larry Brown who is the only non-Steeler to become Super Bowl MVP in any of the Steelers Super Bowl appearances.  I guess for that matter Neil O'Donnell might actually be more hated than Brown. 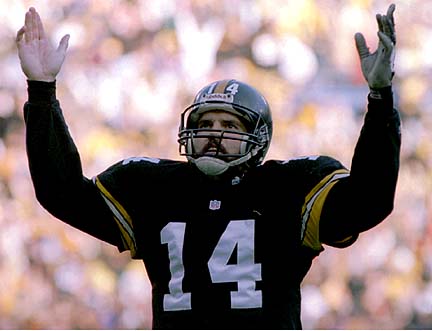 XL-Want a shot at winning $80 dollars to CSNstores.com?  Then check out Sean's Ramblings to enter yourself for a chance to win a few shillings.  Also be sure to check out some of his actual posts while you are over there.  Sean and I actual met up for lunch a few months ago as he is also living in the D.C. area, but a huge Pittsburgh Sports Fan.  He attended Steven Strasburg's debut against the Pirates, and while I only watched in on television it was one of the most electric baseball games I have seen in years.

XLIII-Guys and Gals don't forget that Father's day is this upcoming Sunday.  Father's day gets overshadowed by mothers days in most families and dad's usually wind up with a tie, or a tie rack, or something about as interesting.  Peter King lists a few Father's Day book selections every year and this year it is a little less fleshed out than normal due to his work at the World Cup in South Africa, but their are still some quality books.  Speaking of books I bought my wife a Kindle for her Birthday in April and she loves it!  Anybody else have one of them there gadgets?  Happy Fathers Day to all those dad's out there including mine!