At long last! Well, not just yet, but the long awaited release of mary rose's comprehensive book about the Pittsburgh Steelers is very much in sight. I've been fortunate enough to get my hands on a copy courtesy of Tim and thoroughly enjoyed every last page of it. That's not at all surprising. There's been no bigger fan or acolyte of his writing since he first appeared in the fanposts section of this site in I believe 2006. (If I recall correctly, his first offering had something to do with Marshawn Lynch.).

Since then, Mr. Gleason has graced our site with some of the finest writing about the game of professional football - 'then' and 'now' (but mostly 'then') - of anybody out there, amateur or professional. It's all been that good.

Now he's taken his act to a bigger stage. A well crafted and informative history of the Pittsburgh Steelers in 260 immaculately written pages. 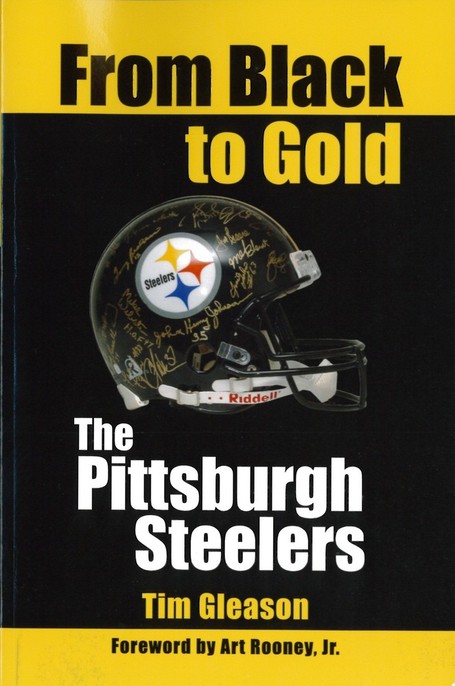 That about says it all right there. Quite an endorsement from the great running back and American war hero, Bleier.

Rooney, Jr., Bleier, and to round out the ringing endorsements...

If there's anyone who can judge the validitty and quality of a comprehensive history about the Steelers, it's Hoak. I may be mistaken here, but I don't believe there's been a longer tenured member of the organization not named Rooney. Hoak's career with the Black & Gold spanned more than 50 years as a player and coach.

A few words from Gleason about the book:

In 1970, the American Football League merged into the National Football League to form a single 26-team entity. Since that merger 40 years ago, the Pittsburgh Steelers have been the most successful and consistent franchise in the NFL. The Steelers have won six Super Bowl Championships, more than any other team. They have compiled winning seasons in 30 of those 40 years, again, more than anyone else. Their overall .609 winning percentage (394-253-2) is also king-of-the-hill. The Steelers have boasted 64 players on the NFL's All Pro Teams, more than any other franchise. In addition to unparalleled success, the Steelers have shown remarkable consistency throughout the past 40 years. Never have they won fewer than five games, a claim that no other team can make, and only twice did they win just five games.

However, pro football did not begin in 1970, though some in Steeler Nation might like to think so. The NFL began in 1920, with the Steelers coming on board in 1933. In the 37 years that Pittsburgh played pro football before the merger, life was not so good. The Steelers were riddled with calamity, tragedy and, for the most part, failure. Regardless, we fans who were around before the merger were still in love with the team unconditionally. While part of me envies younger Steelers' fans who know of nothing but success, a bigger part is grateful that I experienced the growing pains. From Black to Gold is an account of both the growing pains and the glory.

Though Gleason has never had a press credential, he's been able to glean insights from Steelers legends during lengthy conversations and correspondence. That speaks to him as a person and enhances the book's already outstanding storytelling.Then there's the fact that there's no bigger or better fan of the six-time Super Bowl champs than Gleason. There's countless that may match his life-long passion, but it's hard to imagine anyone surpassing it. He shows some of that competitive spirit and fiery side (like say, any time he's discussing the Steelers' historic arch rival, the Cleveland Browns). You'll surely also get a glimpse into the type of person Gleason is - incredibly successful professionally, a life-long commitment of service, connections galore by the sheer virtue of his long history of showing up, getting involved and being someone who others come to rely and depend upon.

As you likely noticed, Gleason was fortunate enough to have Art Rooney Jr. write a thoughtful foreword about the book. It was great to hear from him in those pages and I was thrilled for and proud of our treasured historian for forging a relationship with Mr. Rooney. From the sound of it, Rooney Jr. wanted to know who this mary rose was writing all this incredible historical content on a fan blog. Somebody in his office guessed that maybe 'rose was the wife of a former player or coach who had heard about all these stories and characters over the years. Funny stuff. Rooney Jr. was also gracious enough to share images of some of his truly spectacular art collection for the book.

More from me on this exciting project as it becomes available, and in the meantime, here's to hoping we hear from mary rose in some fashion soon enough.