You Have To Feel Bad For Willie Colon

Share All sharing options for: You Have To Feel Bad For Willie Colon

As announced previously in this space, XFINITY from Comcast has generously agreed to support the best NFL community around -- us!  As part of that effort, between now and the end of the 2010 NFL season XFINITY will be sponsoring a variety of special editorial and interactive features on our site.

Forget for a moment thinking about Willie Colon's injury in terms of how it will effect the Steelers' chances in 2010. Quite frankly, it may actually not matter all that much. Yes, Colon is a vastly improved player who promised to have his best year as a professional in '10 - what would have been his fourth full year as a starter. But being that it's just now July 1st, I think there's more than enough time for new offensive line coach Sean Kugler to get to work with his deep, but inexperienced crop of potential replacements for Colon. 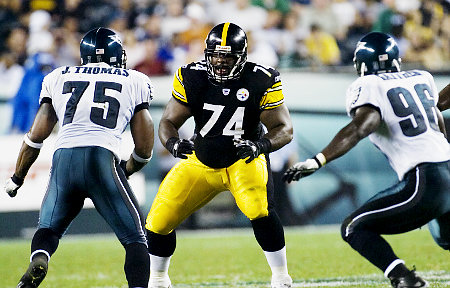 But like I said, forget that for a second. Let's consider just how unfortunate this was for Mr. Colon - a proud man, mind you, that scrapped and clawed his way out of the doghouse of Steeler Nation to become one of the offensive line's more reliable players last season. Colon, for all the abuse he took from us fans during his growing pains in 2007 and 2008, did nothing but show up and fight to get better each and every day. He made mistakes...plenty in fact...but he also had his moments during the team's Super Bowl run two seasons ago and looked like he had turned the corner with his play last season.

Considering where he played college ball - at Hofstra - it really shouldn't be all that surprising that it took Colon some time to adjust to how insanely fast the NFL game is. Seriously...think about it: Hofstra? Football? Another feather in the cap of the Steelers' scouting department. Who looks for kids from the Bronx who went to college in Long Island for offensive line talent?

If the Collective Bargaining Agreement hadn't expired, Colon would have been an unrestricted free agent at the end of this past season. Instead, he became a restricted free agent once again and was scheduled to play this coming season under a nice, but relatively modest pay scale.

Colon and his agent had to be thinking 'okay, Willie, one more year of hard work and you'll get what's yours in 2011 and beyond once this labor situation sorts itself out.' Not an unreasonable line of thinking considering Colon had started the previous 50 games for the Steelers. He's been remarkably durable.

Sadly, Colon may never see that big pay day again in the National Football League. He won't get it next year, as the Steelers or other teams now have legitimate reason to be wary. He's still young enough to play himself into a contract that will set him and his family up for life, but it's going to be an uphill battle from here. And to think, he was right there, so close to locking down his security through 2015.

Bottom line is this - Colon unfortunately missed out on his one huge shot at signing a lucrative unrestricted free agent contract in the prime physical years of his career. He already got setback by the expiration of the CBA; now this. Hopefully the guy can recover in time to play productive football in 2011 and help the Steelers accomplish their team goals while also getting his own personal career trajectory back on track. Who knows though? His replacement might just steal the show this year and force the Steelers hand next offseason. It's all up in the air, but I just feel bad for a guy that showed up and worked hard enough off to get to a place where he was ready to do some of the ass whooping after several years of paying his dues and learning on the job.

Best of luck in your recovery Willie Colon! Keep your head up..,

(Next up from me: My take on the situation along the OL after the unfortunate injury to Colon)