Onward we go through mary rose's countdown of the 12 greatest non-Super Bowl wins in Pittsburgh Steelers franchise history. This one I know holds a special place in the mind and hear of the author, as he elaborates on this epic upset in much greater detail in his upcoming book, From Black To Gold: The Pittsburgh Steelers. (Which by the way should be available for purchase by the BTSC community next week). -Michael Bean- 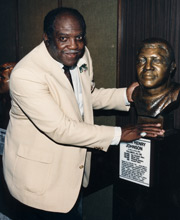 John Henry Johnson rushed for 6,803 yards in his illustrious career.  By today's standards of inflated offense and 16-game schedules, that total does not register as high, but in fact, when John Henry hung up his cleats after the 1966 season, he was the fourth-leading rusher in NFL history.  In addition, Johnson was as complete a back as there ever was.   He was a ferocious blocker and had soft hands that made him an outstanding receiver.  Johnson was a fullback in a halfback's body, which back a half century ago was the ultimate compliment to any running back.

Johnson played sparingly in the old AFL in 1966.  The year before, he ran three times in one game before an injury basically ended his career.  Thus, essentially, 1964 was the last of his 11 great years in the NFL.  On October 10 of that year, with winds blowing off Lake Erie at 24 miles per hour on a cool fall Saturday night, John Henry left no doubt that someday he would be back in Ohio, in a small town named Canton.

As a nine-year-old boy whose father gently led me to become a passionate Steelers' fan from the early 1960s, I had never seen them on television.  In our hometown of Youngstown, Ohio, we could only hear the radio voice of Joe Tucker.  We were visiting my grandparents in Pittsburgh that October weekend and I got to see my team for the first time on Channel 11.

I was all fired up for my first Steelers' game on television on a Saturday night when I did not have to go to bed early.  Though my dad would never want to hamper my enthusiasm, he also knew I was naive in not realizing how much of an underdog Pittsburgh was that night, especially in Cleveland, in front of 80,530 partisan fans.  The Browns would go on to win the NFL Championship that year, while the Steelers were in their first year of a massive six-year decline.

I kept telling my dad that the Steelers were going to win.  He kept walking that fine line between wanting to let me down easy without curbing my optimism.  He had a painful look about him that I now know was simply for my sake.  He knew how good the Browns were and just did not want his son to suffer a huge letdown.  Dads are like that.  For that reason alone, he badly wanted the Steelers somehow to find a way to win that game.

The Steelers took the opening kickoff and went on an unlikely 15-play drive, capped by a Mike Clark field goal.  The Browns then went three-and-out.  The Steelers got the ball again and Johnson started heating up.  Though it was early, he could not be stopped.  On second and nine from the Browns' 33-yard line, he busted right up the middle, ran a few guys over and then outran the Cleveland secondary into the end zone.  The Browns went three-and-out again.

The Steelers got the ball for the third time.  On their fifth play, John Henry swept left, ran over a few more guys, and sped past the secondary again for a 45-yard touchdown.  The Browns went three-and-out, yet again.  At that point, I asked my dad, "When are the Steelers supposed to start losing?"  He looked pleasingly perplexed.  The Steelers had three possessions and 16 points.   The Browns had three possessions and failed to register a first down.

The Browns scored a touchdown in the middle of the second quarter.  At the half, the score was 16-7, but dad could not help believing that the halftime adjustments would surely reverse the game's fortunes.  The second half was completely different from the first, but not as dad had feared.  Instead of bursting big gainers, Johnson ran for three, four and five yards at a clip, often running over people until they got tired of being run over.

"Our linebackers were all hurt," said Hoak.  "We couldn't even field enough of them.  We came up with a gimmick defense that featured five defensive linemen and two linebackers.  Our linemen played great.  The Browns couldn't figure out how to attack us."

When all was said and done, John Henry Johnson became only the ninth player in NFL history to rush for 200 yards in a game (30 carries).  In fairness to the incomparable Jimmy Brown, he was one of the eight who achieved that milestone before Johnson, and he did it four times.  You have to realize how rare such an accomplishment was back in those days to appreciate fully the game Johnson played.  Brown, meanwhile, was held to 59 yards on just eight carries.  One of those carries was a 40-yard draw play, so he otherwise gained 19 yards on seven carries.

The final score was 23-7.  The game was not nearly as close as the score might indicate.  Pittsburgh amassed a ghastly 354 yards rushing (Clarence Peaks chipped in with 96) and simply ran all over Cleveland at will.  Dad and I had one of those father-son experiences that money just cannot buy.

Following that game, the Steelers and Browns would go their separate ways, each in the opposite direction.  There would not be much for Steelers' fans to cheer about for the rest of 1964 and for the rest of the decade.  But on that one glorious Saturday night, for a nine-year old kid watching the Steelers for the first time ever with his dad, it could not get any better.

As for Johnson, he shared the stage with the great Jimmy Brown and the latter was clearly the undercard.  In 1996, in Ohio, I finally met John Henry Johnson and asked him to sign my Steelers' helmet.  I reminded him of that game and his grin was wide enough to connect a 32-year bridge between a little boy and his first football hero.  Thanks again, John Henry.  Welcome to Canton.  And thank you dad for paving the way for this memory and so many more.