A quick note from me before turning the floor over to mary rose, who's been working away at this series for quite some time. I've been eager for it to be ready to go. The author is also the author of the upcoming new book 'From Black To Gold - The Pittsburgh Steelers.' You can read a bit more about that project if you haven't already done so in this recent post of mine. -Michael Bean - 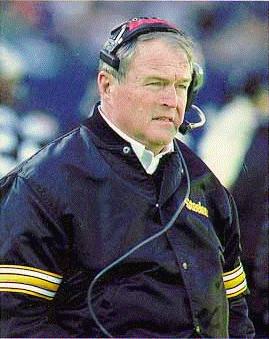 After winning four Super Bowls in the '70s, people said that the game had passed Chuck Noll by in the '80s when no Lombardi trophies came to Pittsburgh.  It is probably natural that when you set standards so high that not even you can keep matching them, some folks may think that you no longer have it.  There was no question that in 1984 the San Francisco 49ers had it.  Quarterback Joe Montana was in his youthful prime, as was Coach Bill Walsh's West Coast Offense.  Montana's West Coast weapons included Wendell Tyler, Roger Craig, Dwight Clark, Earl Cooper and Russ Francis.  San Francisco won 18 games in 1984.  It lost only one.

In the middle of October, Pittsburgh traveled three time zones to face the 49ers in Candlestick Park, a tough place to play under any conditions.  The wind is always blowing and changing directions, the baseball infield causes the field to turn from grass to dirt and back to grass, and stadium configuration makes the facility look exactly what it was - a football field shoved into a baseball stadium.  The Steelers were heavy two-digit underdogs, especially playing with their back-up quarterback.  David Woodley was injured the week before and Mark Malone, having not started a game in three years, was forced into action.

Chuck Noll's strategy was to shorten the game as much as possible.  The best chance Pittsburgh had was to limit the number of possessions that Walsh/Montana had to work with.  Noll's plan was to run the football, stay in bounds and never snap the ball with time remaining on the play clock.  In the first quarter, San Francisco's offense watched from the sideline as Pittsburgh took almost half the quarter to complete a 12-play, 78-yard drive.  Rich Erenberg bowled in from the three-yard line to give the Steelers a 7-0 lead.

Pittsburgh mounted another grueling drive in the second quarter, capped by Gary Anderson's 48-yard field goal.  San Francisco was frustrated at not controlling the pace of the game, but finally, the 49ers orchestrated a long 80-yard drive of their own.  Montana scampered into the end zone from the seven-yard line just before half.  The Steelers lead at the break, 10-7, with fans wondering, "This can't be halftime already?"  It was disappointing to see the 49ers score so late in the half, but the game was unfolding to Pittsburgh's perfection, especially when neither team scored in the third quarter.

San Francisco tied the game early in the fourth on a Ray Wersching field goal.  The 49ers took command when Wendell Tyler skirted for a seven-yard touchdown.  Noll stuck to the plan.  He wasn't going to beat Bill Walsh in a shootout.  The Steelers went on a splendid 15-play, 83-yard drive that ended when Malone found John Stallworth in the end zone from the six-yard line.  The contest was knotted at 17 and was now shortened to a three-minute game.

Still, Joe Montana with three minutes on the clock was not exactly a promising situation for Pittsburgh.  Montana was driving for the kill when Pittsburgh countered with the game changing play.  Bryan Hinkle, the Steelers' underrated right outside linebacker, stepped in front of a Montana pass and returned the interception 43 yards.  The crowd was stunned when Anderson, not Wersching, lined up for the game-winning field goal.  Anderson was true from 21 yards and Pittsburgh lead, 20-17.  Montana struck back quickly in desperation, but Wersching missed a last-second field goal to secure Pittsburgh's upset victory.

The Steelers controlled 10 more minutes of clock than did San Francisco.  They grinded out 175 rushing yards on 47 carries.  Every tote seemed like three or four yards, exactly what Noll wanted.  Frank Pollard led the way with 105 yards on 24 carries.  The 49ers, who came into the game undefeated, ran the table the rest of the way, regular season and playoffs, to win their second Super Bowl in four years.  As the Steelers were celebrating on their trip back to Pittsburgh, so too were the 1972 Miami Dolphins, who remained the only team in modern NFL history to compile an undefeated season.