A heavy dosage of mary rose this week continues - the big news of course being the release of his new book From Black To Gold: The Pittsburgh Steelers. Back now to his series counting down the 12 greatest non-Super Bowl wins in franchise history. Good stuff as always. - Michael Bean -

The Steelers had no business making the playoffs.  They were 8-7 heading into the season finale having lost the tiebreaker to the Bengals.  They needed to beat the World Champion Raiders, 11-4, in Los Angeles.  For you Immaculate Reception fans, the Steelers beat the Raiders, 13-7.  Their reward for making the playoffs was to travel to Denver and play a mile above sea level.

The Steelers were huge underdogs, more than a touchdown.  Their best bet was to make the game a defensive struggle, which they did.  They stopped Denver early, but inexperienced quarterback Mark Malone fumbled the ball away on Pittsburgh's first two possessions, a horrible start on a road game.  Elway hit Jim Wright with a touchdown pass, the score being hung on the Steelers' offense, but led seven-zip nonetheless.  The Steelers remained calm, held onto the ball, and cut the lead on a 28-yard Gary Anderson field goal.

With the teams trading punts, a miscue by the Steelers threatened to blow the game open.  Midway through the second quarter, Steelers' punter Craig Colquitt had his punt blocked--the first of his career--and Denver set up at Pittsburgh's four-yard-line.  But on third-and-goal, Elway floated a weak pass into the arms of nose tackle Gary Dunn. Now with the momentum, the Steelers were able to put a drive together at the end of the first half, resulting in a one-yard Frank Pollard touchdown run. The Broncos tried to tie the game with time running out in the half, but a long field goal attempt by Rich Karlis fell short.

Pittsburgh had a surprising 10-7 lead at the break, playing perfect first-half defense, but Elway could not be held down all game.  Denver orchestrated two drives to take the lead in the third frame; the first ended with a Karlis chip-shot to tie the game at 10, then Elway hit receiver Steve Watson for a 20-yard strike to take a 17-10 lead.  The Steelers then came back with a drive of their own, resulting in a 10-yard touchdown pass from Malone to receiver Louis Lipps.  The third quarter ended 17-17.

The Steelers regained their defensive mojo in the fourth quarter, forcing Denver to punt time and time again.  Meanwhile, Pittsburgh's offense was wearing down the Denver defense, using Pollard and Walter Abercrombie to knife through a tiring Broncos defense. A key pass to Weegie Thompson put the Steelers at the 15-yard-line, where they stalled.  Surely Gary Anderson would give the Steelers a three-point lead with just three minutes left, but the usually-reliable placekicker missed his second field-goal attempt of the game. 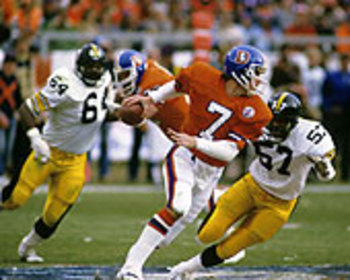 Elway had the game in the palm of his hands, not even feeling the pressure of playing from behind.  On second down, Steelers' safety Eric Williams cut in front of an Elway pass over the middle, stunned Mile High Stadium, and ran the pick all the way down to the Denver two-yard line.  Are you kidding me?  Pollard plowed in from the one and Pittsburgh lead, 24-17.

The Steelers' defense did the job again, holding the Broncos on downs.  Denver then had to use all its timeouts holding Pittsburgh, and then Anderson missed his third field goal, infamously uncharacteristic.  Didn't matter.  Not enough time for even Elway.  Pittsburgh had a patented Steeler game, racking up 381 yards, 169 on the ground on 40 carries.  They crushed the Orange rushing attack (51 yards).  Malone, after his two first-quarter fumbles, did not turn the ball over again and neither did any of his teammates.  The Steelers led in every conceivable statistic - Malone had more yardage than Elway.

Sorry America, your Marino-Elway matchup was not going to happen.