Share All sharing options for: Four Days In Latrobe - One Fan's Experience At The Pittsburgh Steelers Training Camp (Part 1)

What follows is an outstanding post by a longtime reader but infrequent poster, MDM, about his experience at Pittsburgh Steelers training camp in Latrobe, PA in 2008. It's an outstanding read with lots of interesting tidbits to pay attention to if you have any plans to attend camp this year. Many, many thanks to him for reaching out to me and asking if I might enjoy if he did something like this. I sure did! - Michael Bean -

Two years ago a friend and I decided to travel to Latrobe, PA for a four-day excursion to training camp. This trip was partly driven by MaryRoses' story, "The Helmet". In preparation for my own, blasphemously labeled "pilgrimage to the holy land," I stopped by a local sports shop for a Pittsburgh Steelers helmet. Living in southwest Ohio, finding a replica helmet is difficult given how polluted Ohio is with Orange and Black NFL apparel.

"You will want to take the back entrance and run." The shop owner told me. Run? What is this guy talking about? "When I went to camp a few years ago, I didn't get anything the first day because I got there late and the whole place was packed." After about an hour long conversation I learned where Troy Polamalu usually signs autographs (near the fences), where the best parking is located (out back), and almost all I needed to know in preparation for the trip. Who would have guessed a bona-fide Steelers fan was the owner of a sports shop in Dayton, Ohio? The Nation, it seems, is strong even in the heart of enemy territory. 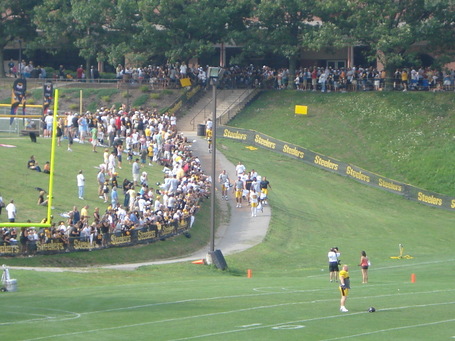 "It sounds like a petting zoo," my friend commented. From across the field you can hear fans yelling, in unison, "Bennnn!" "Bennn!" "Woooodley!"' "Wooodley!", as the players leave the dorm and walk toward the field. Ike Taylor sports a challenge on his tee shirt, "Use Me", his apparel issues a challenge to every wide receiver at camp. The players stroll at their own pace, some of them stopping for autographs, but most focused on the task ahead.* After the players assemble on the field, a horn sounds and, with military efficiency, practice begins.

*Although it is rare for players to sign on the way out to practice, many do stop on the way back to the dorms. Only twice during my four-day stint at the Holy Land did players sign before practice: Once, Tyrone Carter was pumping himself up on an iPod and signed a few autographs. Another Time, Ben walked over to a highly attractive young Steelers fan and signed a poster for her. He signed a few more autographs, but most of the fans thought he was rather transparent. For the purposes of complete disclosure, I did stand by her the rest of the day in order to free ride off of her success. 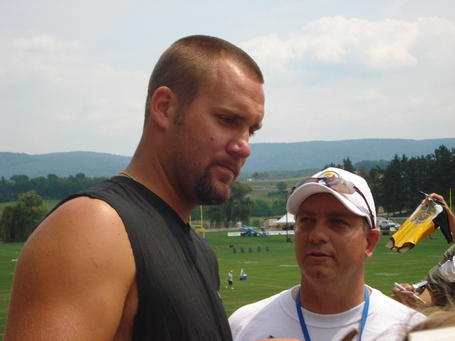 The first day we decide to camp out by the dorms and wait for players to return after practice. This is a fairly boring endeavor; it's difficult to see any of the practice fields from the gates around the dorm. Every few minutes we see Big Snack appear through the trees as he takes laps on his own private practice field. This is the training camp when Big Snack decided to go for the Supersize and is banished to his own field until Coach Tomlin is satisfied with his health. During my time at training camp, Hampton was doing one of two things: Running laps around a practice field or, when he needed to watch the defense, they wheeled an elliptical machine out on the field for him. Needless to say, he is not in the mood to sign many autographs.

While waiting for practice to end, I decide to talk with some of the other fans that made the same pilgrimage to Latrobe. Most of them are what you would expect: Die-hard fans who drive a few hours in order to watch the Steelers practice. Many of them express that with a bad economy, it's best to see their team at training camp (admission is free). Some high school coaches watch, clipboard in hand, scribbling notes regarding how the pros run their pre-season camp.

There is, however, a distinct group of people who converge around the players' dorm everyday: memorabilia chasers. When I look around, I see about five or six body-bag size duffel bags filled with Steelers memorabilia. What's truly depressing is the conveyor belt system where a young child will hand one of the players something to sign, and as soon as the player hands it back, it goes straight into a duffle bag and a new trading card, pennant, or helmet is in the hands of that child. After seeing this system, I can understand why players are not always happy to sign autographs. 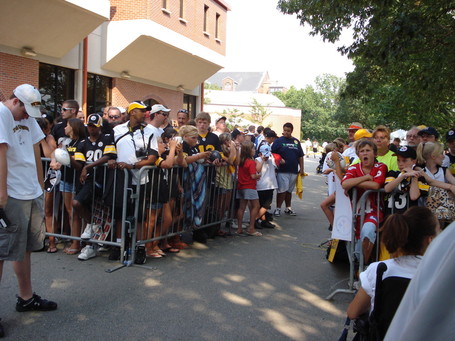 One of the amazing parts of training camp is seeing all the rare or homemade tee-shirts fans bring to camp. Many people wear shirts professing their love for one player or another (this year's favorite was Troy - he had quite a group of followers), and another cleverly designed shirt that read, "Guns don't kill people. LaMaar Woodley Kills people". Soon the practice comes to an end and the St Vincents' student volunteers begin shuffling the crowd out of the walkway back to the dorms.

One of the workers identifies the visitors by the jerseys they are wearing, "Polamalu, Ward, and, uh, number 83, clear the walkway". Really? Number 83? A woman, who could have been no younger than mid-80s, turns to me and says, "He really shouldn't be here". Everyone who hears her nods in agreement.

As soon as the players begin walking back from the field, the petting zoo kicks back up. "Mr Holmes! Mr Holmes!" Yet, this time, however, not everyone is on the same page. A college student standing next to me starts calling for James Farrior to sign a pennant for him. The problem is, this is not James Farrior: it's Larry Foote. Players at camp do not have their names written on the back of their jerseys; the only way to distinguish players (aside from, um, actually knowing who they are) is offense (white jersey) and defense (yellow jersey). If you don't know what the play looks like without a helmet, or are unsure of their number, its going to be tough sledding getting them to sign something*. Larry Foot, upon being mistaken for his linebacker-teammate walks by shaking his head.

*Quick tip: if you're unsure who the players are, wait for someone else to start calling them over and then join the choir; Steeler cred is something that can disappear quickly with one missed diagnosis.

Behind Foote, clad in all black, is a signing machine: Willy Parker is working his way from one side of Pennsylvania to the other, signing everything in sight. After about five minutes, he's standing right in front of me and has my helmet in hand. Awkwardly standing there, I gain the courage to ask, "So Willy, how's the leg?*" 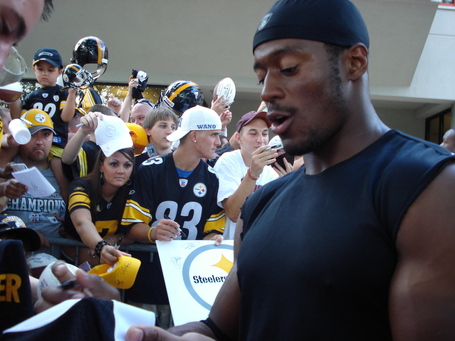 *After training camp, a reporter asked Willy what he looking forward to the most in the regular season. He said he wanted to start getting into real games so that "people would stop asking him about his leg." Oops.

"Man, it feels great. I can't wait to test it out on Baltimore." One of the best parts about training camp is being able to interact with the players. It gives you a feeling you are not merely rooting for laundry with a number on it.

That night we decide to see a movie. The Dark Knight has received good reviews, and we're pretty tired from the first day of camp. The medium-sized theater in Latrobe was almost empty and right as we pay for our tickets, Deshea Townsend and Carrie Davis* walk through the door. Dressed in Steelers gym shorts and black tee-shirts, they are looking to relax before the second preseason game. Their plans are not successful, however, because none of the movies end in time for them to get back without "coach killing them." Before they leave, however, I get a chance to walk up and wish them good luck in their game the following day.

They reply, "Thanks man, we really appreciate it" and turned for the door. The next day, I share this story with a few of the seasoned training camp vets and they inform me it's not unusual to see players out around the town after practice. Unfortunately, this would be our last off-the-field encounter with the team.

*My memory is fuzzy about if these are the two players, although I believe they are.

"Shouldn't he be stretching with the rest of the team?" my friend asks. It's a legitimate question, the entire squad is on their backs stretching their legs before practice and number 7 is just standing there. "I mean, he isn't hurt, is he?" 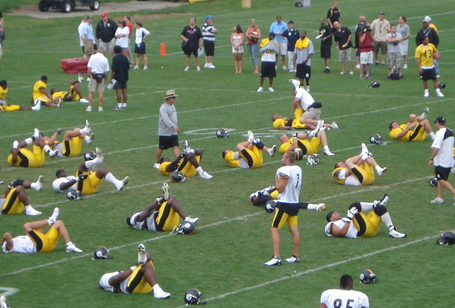 On this practice, however, Ben strolls around the practice field and exempts himself from stretches. And the light running. And all the other team warm-up drills before the QBs break from the rest of the team. What's going on here? We reason it was because he is a Super Bowl winning quarterback and is held to a different standard than the newly drafted Dennis Dixon, but this might only be half the story.

*After hearing about Dez Bryant, I'm not sure if this is "teammate encouraged" or if we have a true dancer on the defense.

Now, two years later, it appears Ben's behavior may have been more upsetting to the team than we originally thought. During this offseason, other Steelers mentioned that Ben's privileged-attitude had made him unpopular in the locker room. Although I have no direct evidence that his behavior in training camp was seen as an affront to the team, it's hard to understand why every other member of the Steelers (including Hines Ward and other veterans*) would be expected to go through warm-ups while Ben would not.

**The only other player that was seen not participating in these activities was Troy Polamalu, and this was because he was rehabilitating his knee.