Onward with mary rose's series of the top 12 non-Super Bowl wins in the history of the Pittsburgh Steelers franchise. If you enjoy these, you'll surely be eager for the release of his new book, From Black To Gold: The Pittsburgh Steelers, which is scheduled for release in less than two weeks time. - Michael B. -

Yeah, sure, the Steelers were the favorites to win the 1995 AFC Championship Game, but several gnawing factors were weighing heavily against the home team.  First, this very game a year ago was played in the same stadium and Pittsburgh, heavy favorites, found a way to lose, falling three yards short.  Second, it had been 16 years since the Steelers played in a Super Bowl.  An entire generation of fans did not experience those glory years.  They weren't convinced of anything.  Third, the Indianapolis Colts had been winning ugly and doing so with a quarterback, Jim Harbaugh, nicknamed Captain Comeback.

On January 14, 1996, Three Rivers Stadium was a nervous wreck and I suspect the whole of Steeler Nation was as well.  The Steelers were the Two Seed in this tournament with an 11-5 record.  The Kansas City Chiefs were top dogs at 13-3, but lost to the Cardiac Colts in the divisional game.  The Colts were 9-7, but were playing the Cinderella card with their pesky quarterback and gritty team.  The game unfolded with each team scoring in each quarter, but nothing more than seven.  Cary Blanchard gave the Colts an early 3-0 lead, but was matched by Norm Johnson and the first quarter ended 3-3. 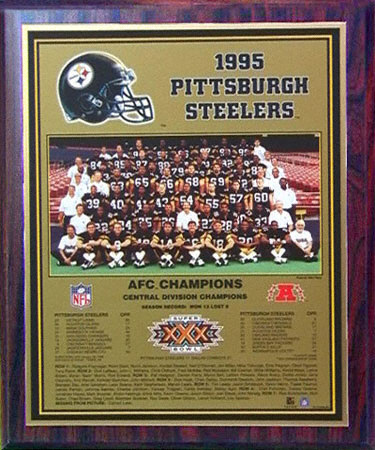 Blanchard again connected and again the Steelers responded, late in the second, on a controversial play.  With quarterback Neil O'Donnell scrambling, he found Kordell Stewart in the back of the end zone for a five-yard touchdown pass.  Replay showed that Stewart stepped out-of-bounds, but there was no flag.  Colts' fans like to think they were robbed and maybe (probably) they were.  Steelers' fans like to think that Stewart got shoved out, thereby making the play legal.  In either case, the score at half was Pittsburgh 10, Indianapolis 6.

The third quarter was a Xerox copy of the first.  First Blanchard and then Johnson kicked field goals.  The Steelers led going into the fourth, 13-9.  They led 13-10 against the Chargers a year ago before that stunning defeat, so the stadium was full of pins and needles.  Here we go again.  With eight minutes and change remaining, Harbaugh threw a 47-yard touchdown pass to Floyd Turner.  The Colts led by three points for the third time in the game.

The Steelers were stopped on their next possession in a game where very few possessions remained.  Indy didn't need more points as long as it had the clock and the ball on its side.  On a third-and-one, the game had new life for Pittsburgh after a brilliant play Steelers' cornerback Willie Williams.  It was a play that saved the season.  Needing just 36 inches, Colts' fullback Lamont Warren looked to have acres of daylight in front of him when Williams shot through the backfield and made a great tackle for a loss.  Indianapolis had to punt instead of perhaps running out the clock.  The Steelers got the ball back one more time with 3:03 left on the clock.  Could they finish the drive that fell three-yards short a year ago?

Pittsburgh dinked and dunked and mixed up plays until it reach the Colts' 47-yard line.  The Steelers were faced with fourth and three.  The Steelers went for it, putting the game on the line.  O'Donnell hit Hastings for a nine-yard gain to the Colts' 38 for the game's second saving play.  On the very next play, O'Donnell threw a bomb down the right sidelines which was pulled in at the one yard line by Ernie Mills.  Two plays later, Bam Morris ran it in for the touchdown with just 1:34 remaining.  The Steelers regained their four-point lead, 20-16.  They finished what they could not finish a year ago.  Or did they?

Harbaugh was not named Captain Comeback for nothing.  He got it rolling.  Father Time had switched jerseys and was now wearing black and gold, but somehow Harbaugh got his team to the Steelers' 35-yard line with one play left in the bag.  It was Hail Mary time.  Harbaugh dropped back and heaved it into the right side of the end zone.  From where I sat (or stood at the time), I thought that receiver Aaron Bailey caught the ball.  Then the side judge moved in and emphatically ruled that the ball hit the ground.  There was a delayed roar from the crowd.  It seemed like both teams were standing around to make sure.  I'm sure it was just a few seconds, but it seemed like minutes.  Then we were worried that somehow an objection might somehow make that pass complete.  But players started shaking hands and moving to midfield, so we knew it was over. 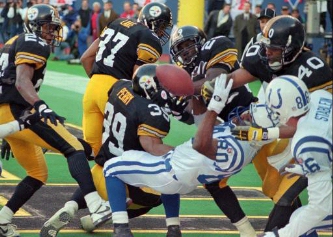 Walking out of the stadium, not a moment before, it hit me that the Steelers were going to the Super Bowl.  Folks were screaming in the streets.  It was a combination of ecstasy and relief.  Sixteen years were a long time.  Steelers' fans in the '70s got spoiled by championships.  We fell into the trap that this Super Bowl thing would be neat all the time.  We learned the hard way in the '80s and half the '90s that getting to the final dance was very difficult and very rare.  In the late '70s I was pleased at the expected.  In 1995, I was extremely grateful.