I've been traveling and on vacation this past few days so my apologies for the lack of content from me. Not surprisingly, all of you have stepped up in my absence. Many thanks like always. For now, back to mary rose's outstanding countdown of the 12 greatest non-Super Bowl wins in the storied history of the Pittsburgh Steelers. If you're stumbling upon the site for the first time and enjoy the writing, be sure to check out the other posts in the countdown, as well as the new book the author recently published. - Michael Bean -

This series will highlight my Top 12 Greatest Wins in Pittsburgh Steelers' history. I do not include Super Bowls, as they would eat up half the series! Please keep in mind that these wins are not necessarily the most important wins. If that were the case, then only the deepest playoff wins would be recounted. Sometimes "importance" is a factor, but not always. Sometimes the underdog factor comes into play and sometimes the comeback factor is the reason for a game being selected where it is. Sometimes it is just the way the game unfolded. In any case, this is just one person's opinion, so there is no right and wrong, just fun. Enjoy.

The 2008 AFC Championship Game was special for a myriad of reasons. It reminded me of an event 33 years earlier called the "Thrilla in Manila," two heavyweight champions beating the hell out of each other for the third time, with neither giving an inch. The Steelers had beaten the Baltimore Ravens twice during the regular season, but we all remember how close those two games were. Pittsburgh fought desperately from behind in both games to win by a scant three points, once on a controversial touchdown where the ball barely broke the plane.

Good news started this playoff game when the Steelers scored twice in the first quarter. The bad news is that they were both Jeff Reed field goals. One was after a 45-yard pass from Ben Roethlisberger to Hines Ward, and the other followed rookie Joe Flacco's first interception in 98 passes. Flacco was trying to become the first rookie quarterback ever to lead his team to a Super Bowl.

Things were looking sweet early in the second quarter when Roethlisberger, improvising in his playground, lofted a leading touch pass to Santonio Holmes who took it the rest of the way, 65 yards. The Steelers were on the verge of command, but Baltimore would not allow it. The Ravens stayed collected and stuck to their game plan. They shut Pittsburgh down for the rest of the half and quietly went on a drive of their own. Willis McGahee plunged in from the three. At the break, the 13-7 Pittsburgh lead did not feel nearly as good as the 13-0 spread with a minute gone in the second frame.

There was only one score in the third period, that being a 46-yard field goal by Reed. The good news is that the 16-7 lead was beyond any single score the Ravens could match. The bad news came with nine and a half minutes to play when McGahee bulled in from the one for his second touchdown. Now the score, 16-14, was within a field goal of the Ravens winning it.

With less than four minutes to play, the Ravens had the ball and were looking to win the game. If they could milk the clock and weasel into field-goal range, the Steelers' loss would have stunned as much as any in their history. Everyone at Heinz Field thought back to 1994 when the Steelers lost the Championship Game, at home, to San Diego, somehow letting that contest slip from a game-long lead into a crushing defeat. Then there was 1997 and 2001 and 2004 when the Steelers also lost AFC title games at home.

We tried to cheer as loudly as we could, but it was a tentative cheer. We just could not separate all those home championship losses from the moment. And then came separation. Safety Troy Polamalu read Flacco like a dime-store novel, picked off the pass at the 40-yard line and waltzed and weaved into the end zone.

It was the loudest I have ever heard the home crowd in Pittsburgh. Remember, the Immaculate Reception was a strange play in which the officials did not signal touchdown and did not allow the extra point for a long time. In 1995, we weren't really sure if Jim Harbaugh's pass was complete or not. Even after the side judge ruled incomplete, the possibility of challenge muffled our roar for several seconds. But Troy's pick, seeing no flags while he juked and jived, caused an explosion I have never heard before. That explosion alone puts this game in the Top 10.

The game was not over - far from it, but we didn't have to suffer those final four and a half minutes. When Ryan Clark knocked McGahee back into Saturday, it was a joyous countdown afterward. The final was 23-14. The NFL quickly set up the stage and conducted the ceremonial Lamar Hunt Trophy presentation. When Coach Mike Tomlin acknowledged Steeler Nation, I thought the place was going to implode. Afterward, no one wanted to leave, despite the cold weather. We all sung Steelers' songs walking through the aisles, strangers hugging strangers. 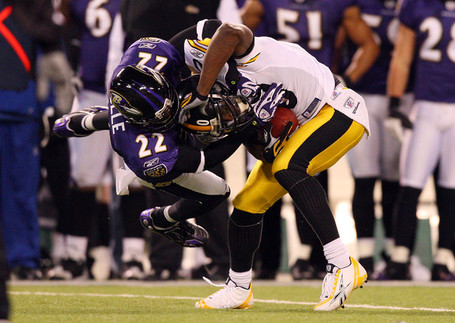