As if you needed any reminder that our own mary rose has been pumping out some of the absolute best writing about the NFL of anybody alive today, here's the latest in his countdown of the greatest non-Super Bowl wins in the history of the Pittsburgh Steelers. No. 5 on his list dates all the way back to 1952. So if you're like me, count on learning something new in what follows. And if you enjoy and are unaware of his recently released book, From Black To Gold, be sure to check it out. Stay tuned for the remainder of his list in the upcoming weeks, as well as other offerings about the Steelers - past and present - here on BTSC. - Michael Bean -

This series will highlight my Top 12 Greatest Wins in Pittsburgh Steelers' history. I do not include Super Bowls, as they would eat up half the series! Please keep in mind that these wins are not necessarily the most important wins. If that were the case, then only the deepest playoff wins would be recounted. Sometimes "importance" is a factor, but not always. Sometimes the underdog factor comes into play and sometimes the comeback factor is the reason for a game being selected where it is. Sometimes it is just the way the game unfolded. In any case, this is just one person's opinion, so there is no right and wrong, just fun. Enjoy.

Steve Owens was feeling pretty good about himself. The head coach of the New York football Giants was the leader of one of the most successful franchises in the NFL. In those days the Giants battled the Cleveland Browns every year for Eastern supremacy. Owens created "The Umbrella Defense," fanning five pass defenders across the field looking like an umbrella. Owens invented this defense in response to the Browns' Otto Graham, who had taken the NFL's passing game to another level. Owens was so proud of his new defense, he wrote a book about it. As bad timing would have it, the book was scheduled to hit the public right about the time the Pittsburgh Steelers hung 63 points on the Giants.

Actually not all of those points were scored by the Steelers' offense, but in any case, this game was as fun to watch or listen to as any game in Steelers' history. The 63 points still remain a team record and the 56-point victory margin is another record, perhaps neither of which will ever be broken. 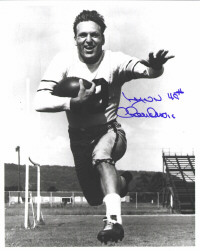 The game was delightful from beginning to end. On the opening kickoff, Pittsburgh's Lynn Chandnois returned the kick 93 yards for a touchdown. Of course, typical of Pittsburgh's fate in those days, one of the Steelers was offside on the kick and the penalty nullified the touchdown. Then unlike Pittsburgh's fate in those days, Chandnois returned the re-kick 91 yards to paydirt! The fans at Forbes Field knew right then and there something special was in store.

For the rest of the half, the Steelers poked holes through the Umbrella Defense. Chandnois ran one in from five yards; Elbie Nickel caught a 21-yard TD pass from Jim Finks and Ray Matthews snagged one from 42 yards. At half the score was 28 to zip. Meanwhile, The Steelers' Hall of Fame defensive tackle Ernie Stautner was living in the Giants' backfield. He was unblockable. For the game, New York racked up all of15 rushing yards on 20 carries, precisely 27 inches-per-carry.

Pittsburgh came out in Quarter Three and continued to rain through the leaky umbrella. A Finks-to-Dick Hensley 25-yard hook-up made the score 35 zip, before the Giants took out first-string quarterback Charlie Connerly. They replaced him with a defensive halfback named Tom Landry. It was in that third quarter that New York scored its only points, those coming on a trick flea flicker from Landry to Bill Stribling covering 55 yards. It was the only touchdown pass Tom Landry would ever throw.

The Steelers had more fun in the fourth quarter. Hensley caught his second TD bomb from Finks, this one from 60 yards, before George Hays scooped up a blocked punt and scampered in from three yards out. At that point, Steelers' Head Coach Joe Bach let Jack Butler play receiver. Butler should be in the Hall of Fame as one of the best defensive backs ever (52 career interceptions at the time were surpassed only by Emlen Tunnel and Dick Night Train Lane, two Hall of Famers), but I digress. Butler responded by catching a 20-yard touchdown pass from back-up quarterback Gary Kerkorian. Leading 56-7, Bach had his worst lineup possible in the game, but they too could not be stopped. Rookie halfback Ed Modzelewski banged in from three yards and the scoring ended, mercifully, at 63-7. 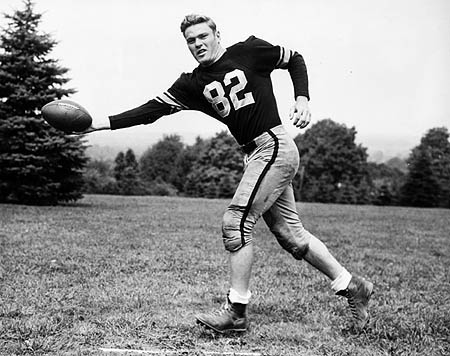 Not many things went right in that era, but on November 30, 1952, nothing could go wrong.