Share All sharing options for: BTSC Daily Six Pack - 'Tis the Preseason to be Jolly Edition

IX- One of the things I thought we would get to see on Saturday was Daniel Sepulveda, A.K.A. Robopunter, taking a few kickoffs. We had heard the previous weekend that he had taken a few with great success. Unfortunately, the duty was left to Jeff Reed and as usual, he could not put the ball in the endzone (except for the one where he had the wind at his back and he kicked a line drive through the back of the endzone). Blogger Phil Dzikiy decided to take out his stop watch and measure the hang time of his kicks. If I recall correctly, I believe someone reported that Robopunter was getting 4.1+ in his hang time.

X- Sports Radio Interviews caught up with Dan Rooney, who weighed in with his thoughts on Dick LeBeau, Ben Roethlisberger, and President Obama (please no political debates). It's always nice to hear from Dan, and this interview is no exception.

XIII- Did you miss all of the NFL preseason games outside of the Steelers, but you want to know what happened? Well Peter King's Monday Morning Quarterback article does a nice job wrapping up the NFL's first weekend of preseason games.

"We want Ben! We want Ben!''
-- Chanting fans -- though not a huge number of them -- in the first half of the Steelers-Detroit preseason opener Saturday night at Heinz Field. Coach Mike Tomlin did not play quarterback Ben Roethlisberger, who will be suspended for at least the first four weeks of the regular season.

On a side note, I also thought Wexell's tweet on that situation made a good point:

@jimwexell Bouchette reporting no Ben tonight. I'm surprised. Figured they'd want to get this out of the way.

XIV- Ed Bouchette of the Pittsburgh Post-Gazette wrote a nice summary of his thoughts on the game. I thought it was interesting when he mentioned that Ben Roethlisberger did not comment after the game. If you missed the game entirely, here is the highlight video from NFL.com. My favorite highlight still is the block that Mewelde Moore throws on the Dennis Dixon right side sweep in the redzone. The play starts at 1:30 and the bone-crunching block occurs around 1:35. 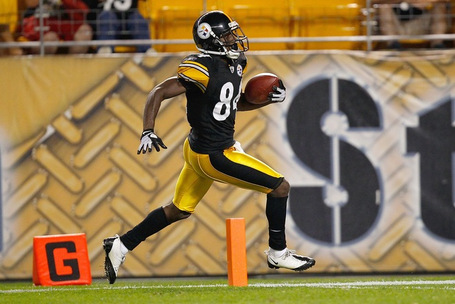 XL- Isaac Redman deserves his own shout out in the six pack. He looked tremendous on Saturday and I cannot make a logical argument, as of now, against him being our #2 option in the backfield. Buck Frank, a blogger for the ReviewOnline.com, wrote a piece on Sir Isaac after the game. He believes that Redman is the answer to the Steelers depth problem at RB. Also, I am surprised how quickly the nickname "Red Zone" has spread. I thought it had started here, but I could be wrong. 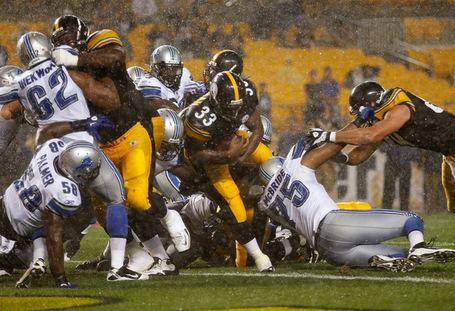 XLIII- So, I caught my first episode of Hard Knocks ever. I hate the Cowboys and Bengals, so I did not watch theirs. Also, I would have rather watched a Justin Beiber concert than see the Chief's preseason camp. Conversely, the Jets play the kind of football I like and I think Rex Ryan is an interestingly eccentric guy. I was blown away with how awesome the show was. Unfortunately, I have never had the pleasure of attending a NFL camp, so I really only had a vague idea of what was going on. Anyway, I bring this up because I am curious: would you want the Steelers to participate in Hard Knocks if they came knocking (sorry, couldn't resist).