My book, From Black to Gold - The Pittsburgh Steelers, has been out one week now and the response has been wonderful.  I was overwhelmed to see so many BTSC readers purchase the book thus far, and more keep rolling in.  As many of you know, everyone who identifies themselves with "BTSC" in either the PayPal "Add special instructions to merchant" field, or on the memo line of a check, is in a drawing to receive an autographed vintage photo of the greatest trio of linebackers ever to play the game - Jack Ham, Jack Lambert and Andy Russell.  The deadline was today, August 2, but we are extending this one week to allow those who may have come back from vacation to join in.  In any case, for any brand new BTSC folks, the following flier gives you details of the book:

From Black to Gold – The Pittsburgh Steelers...New Book Now Available!

"From Black to Gold belongs on every bookshelf in Steeler Nation," claimed Steelers’ legend Rocky Bleier, after reading the latest and hottest Steelers’ book to hit the market.  The book can be purchased by visiting the following website: 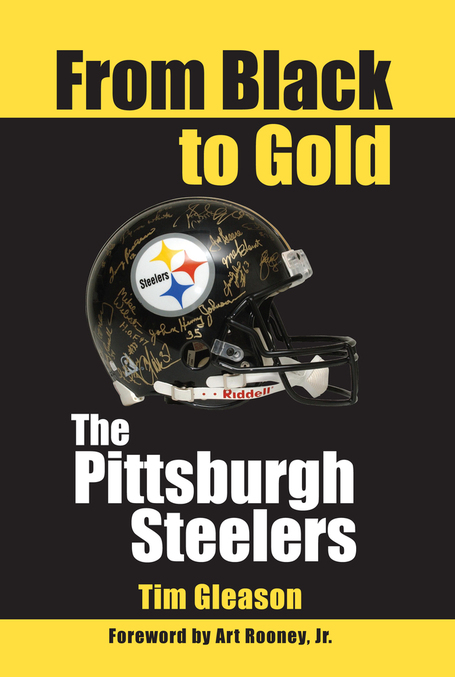 Details about the book after the jump...

An attractive 260-page hardcover publication, From Black to Gold is a historical perspective of the Pittsburgh Steelers as seen through the eyes of a die-hard season ticket holder.  It is filled with stories and vignettes of the dark days and golden years – from 1933 to the present.  There are 24 photos and illustrations in the book, with foreword written by Art Rooney Jr.

"From Black to Gold is a wonderful archive of both the lean years and glory years," noted Rooney Jr., current Steelers’ vice president.  The book features an exciting medley of the following chapters (and much more):

It would be much appreciated if you would forward this message to anyone who may be interested or may know of others who may be interested.  The more I can spread through the cyber-world the better, including group emails, Facebook, Twitter and anything else along those lines.