A few links to start our Monday on this first full week of training camp for the six-time Super Bowl champion Pittsburgh Steelers.

IX -  Doug Farrar, who wrote an excellent article in this year's edition of the Maple Street Press Steelers Annual for me, was lucky enough to chat with soon to be Hall of Famer Dick LeBeau about his storied career as a player and coach. You can read Part 1 here. 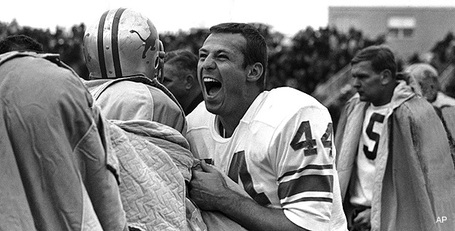 X - Rookie outside linebacker Thaddeus Gibson has hit the ground running to start his first training camp. Dale Lolley noted yesterday on his solid blog that Gibson shined in Sunday's backs on backers drills. In fact, Lolley notes that the only guy that Gibson didn't light up is none other than the uber-camp sensation Isaac Redman.

XII -  Jeff Reed, who the Steelers slapped the Franchise Tag on earlier this offseason, is trying to remain focused on his kicking duties in Latrobe despite not being pleased with the lack of a long-term deal being offered as of yet. My hope is that the team finds a way to lock him down for another three years. Why? Well, look what happened to the Baltimore Ravens last year. They thought they could just move on from Matt Stover without there being any consequences, and lo and behold, Stover's replacement, Steve Hauschka, cost them several games before eventually being released.

XIV -  We don't turn to the New York Times too too often for sports coverage, but their football blog has a fairly solid preview of the Steelers 2010 season.

XV -  Uh oh. The fumbling problems displayed by running back Rashard Mendenhall appear to not have been resolved just yet. Mendenhall reportedly fumbled on both Saturday and Sunday during drills, drawing the ire of head coach Mike Tomlin in the process:

"I never have an extremely high tolerance for lack of ball security," coach Mike Tomlin said.

XLIII -  Quick Hitters: Buddies James Farrior and Larry Foote are happy to be reunited but most remain focused on competing with one another for playing time; former Steelers cornerback Deshea Townsend has signed a one-year deal with the Colts. Good move by Indy; Offensive tackle Tony Hills may have had his chances of seeing the field much in '10 diminished when Flozell Adams was signed, but he's still working hard to impress his coaching staff, mainly by proving his versatility; from our SB Nation Pittsburgh regional site: 'Bruce Arains and the Death of Steeler Football.'