Back to maryrose's outstanding countdown of the 12 greatest non-Super Bowl wins in Pittsburgh Steelers franchise history. No. 4 on the list is sure to bring back some memories for old and newer fans alike. What a game! And if you're new to the author's writing but find yourself enjoying it, be sure to check out the rest of the countdown lsited at the bottome of the post, as well as to check out his recently released book, From Black To Gold. - Michael Bean -

There is only one thing worse than losing to the Cleveland Browns.  That is, losing to the Browns in a playoff game.  After the 2002 season, the two teams squared off in an AFC Wildcard Game at Heinz Field on January 5.  Pittsburgh won the division with a 10-5-1 mark.  Cleveland sneaked into the playoffs at 9-7.  The Steelers won both regular-season games by the skin of their teeth.  They won 16-13 at home in overtime and then 23-20 in Cleveland.  Still, the Steelers won five of their last six games to charge into the playoffs with momentum.

The offensive coordinator for the Browns was none other than Bruce Arians.  Despite changing quarterbacks in midstream, and despite having a set of offensive weapons that was milktoast at best, Arians turned the Browns into a very good offensive machine come the playoffs.  Anyone in Pittsburgh not believing that would learn the hard way in this playoff game.

Cleveland took the opening kickoff and put seven points on the board before a minute and a half was gone in the first period.  And this happened despite a successful challenge by Pittsburgh to negate a long pass play.  Late in the first quarter after exchanging punts, Pittsburgh surrendered the ball on consecutive turnovers and Cleveland took advantage.  The Browns led 14-0 one play into the second quarter.  Steelers' fans finally had something to cheer about when Antwaan Randle El returned a punt 66 yards for a touchdown to cut the lead in half.  Cleveland answered with a field goal late in the half and took a 17-7 lead into the break.

The third quarter did not help Pittsburgh.  The Browns extended the lead to 24-7 when Dennis Northcut caught his second scoring strike from Kelly Holcomb.  The Browns drove again and after a borderline roughing-the passer call against safety Mike Logan, had the ball on the Pittsburgh 28-yard line.  Half the third quarter had melted and Cleveland was knocking on the door again, on the verge of a blowout.  It was the low point of the game for Pittsburgh.

Folks in Cleveland were at their high point.  Just 38 hours earlier, the Ohio State Buckeyes shocked the Miami Hurricanes and won the college championship.  Could lightning strike twice in three days?  Browns' fans (who were also Ohio State fans) were heading to the best football weekend in Ohio in 40 years.

Not so fast my friend.  Logan, who should not have felt the need to redeem himself, did exactly that with an interception that would save the game.  With new life, the Steelers went into a no-huddle offense and kept themselves alive with a six-yard touchdown pass from Maddox to Plaxico Burress.

Cleveland's offense would not go away.  Holcomb, a career journeyman, would throw for more than 400 yards. The browns kicked a field goal early in the fourth quarter to maintain healthy lead (13 points), but now it was Pittsburgh who would not go away.  Maddox hit Jerame Tuman on a tipped three-yard touchdown pass over the middle to get the Steelers to under a touchdown deficit for the first time since a minute gone in the first quarter.

Cleveland answered.  With less than four minutes to play, the Browns had upped the lead to 33-21 on Holcomb's third touchdown pass.  The Steelers, in desperation mode with every possession, got close again on Maddox's third TD pass, this one to Hines Ward from the five.  The game had turned into a heavyweight prizefight with each combatant counterpunching the other.

But the Steelers were behind and could not win this game without getting a stop.  Incredulously, some in Steeler Nation later blamed Arians for not closing out the clock, but in truth the Browns could not run the ball.  They tried throughout the game, but could only muster 38 yards on 28 carries, a pathetic output.  Moreover, using a short and intermediate passing game to maintain the lead, it was Arians' fault when Northcut dropped a perfectly-thrown third-down pass that would have sealed the deal with two minutes and change left in the game.  The Steelers had but one timeout remaining.

With new life yet again, Pittsburgh would not die.  The Steelers needed all 61 yards to win the game.  Maddox to Burress and then Ward got the ball to the Cleveland 27.  Burress caught another at the 10-yard line, then Ward took his turn to the four-yard line.  On a great play call (they are all great when they work), Chris Fuamatu Ma'afala ran a delay into the end zone.  Pittsburgh had its first lead, 34-33, and then tacked on the two-point conversion when Randle El hit Tuman on a perfect gadget play. 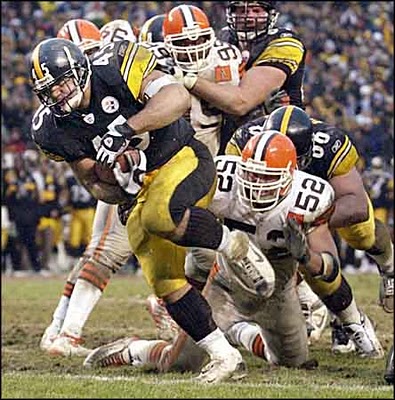 The Browns had time left (50 seconds) to get into field-goal range, but had no timeouts left.  Their timeouts were used foolishly, including a challenge on one of Pittsburgh's earlier touchdowns.  Cleveland drove into Pittsburgh territory and completed a pass to the Steelers' 30-yard line.  Unable to stop the clock, Cleveland could not get the field-goal unit on the field and the game ended, 36-33.

Pittsburgh had survived a great playoff win, one of the most exciting ever, while Cleveland fans were relegated to enjoying their Ohio State title.  It was the second time in a decade that the Steelers had beaten the Browns three times in a season.  All three wins in the 2002 season were by three points.