During this past offseason, Jerry Olsavsky was named Defensive Quality Control Coach of the Pittsburgh Steelers. When the announcement was made, those who remembered Jerry wearing the black and gold were thrilled to have him back in the Steeler Family.  I particularly was pleased, being that Jerry O and I went to the same high school and serve on its Hall of Fame Committee (Chaney, Youngstown, Ohio).  Olsavsky, 42, was drafted by the Steelers in the 10th round of the 1989 NFL Draft and played linebacker with the team from 1989-97.  He also contributed mightily on special teams throughout his career.  At six foot, 217 pounds, no one played the game harder or got the most out of his talent than Jerry O. 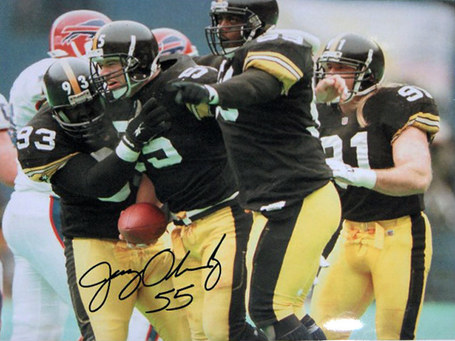 During his rookie season, Olsavsky played on special teams and was backup to Hardy Nickerson at inside linebacker.  Jerry O started the last eight games due to Nickerson's injury and played well enough to be named to the NFL All-Rookie Team.  His bust up the middle to block a punt in the Pittsburgh-Houston playoff game during his rookie season saved the game for the Steelers. Olsavsky suffered a devastating knee injury in 1993 against Cleveland, but refused to give up.  He came back the next season after a rigorous rehabilitation program and never lost a beat.  The 1996 Steelers' Media Guide depicted Olsavsky as the "epitome of determination and perseverance."

BTSC:  Jerry, the Steelers' administration has undergone many changes since you were here as a player.  There's a new Rooney in charge and now there are several investors in the picture.  How have things changed from your perspective?

Olsavsky:  Nothing whatsoever has changed.  The organization has refined itself, but the management style has remained the same.  This is still very much a family-style organization.  Mr. Rooney (Art II) was a great lawyer before taking over the team, so he knows what he is doing.  He hasn't changed what his grandfather and father built.

BTSC:  When you think of Mike Tomlin, what jumps out at you?

Olsavsky:  Two things really.  First, his people-skills are second to none.  He understands relationships.  He would be a successful executive in other areas of life, and you cannot say that about alot of coaches.  He's life-smart first and football-smart within that.  If you can't get along with Coach Tomlin you can't get along with anyone.  Second, he's no-nonsense.  He has one goal and everyone knows what that is.  He motivates you to put your hand in the pile and ride along with him.  He's a great football guy, very instinctive.

BTSC:  What does a defensive quality control coach do?

Olsavsky:  I watch alot of film and enter data that becomes handouts, playbooks and game plans.  With all those materials, the quality of the output is only as good as the quality of the input.  Also, since I was a linebacker and special teams player, I help in those areas during on-field practice.  I see what the players see.  I help them understand what they should be seeing.  I know exactly what they are going through, so they appreciate my contributions from a player's perspective.

BTSC:  The Steelers have two all-world players at outside linebacker, yet they drafted that position in both the second and fourth rounds.  Did that surprise you?

Olsavsky:  Not at all.  Woodley and Harrison practically played every snap last year.  You need depth.  You need to give those a guys a break so they will be stronger at the ends of games.  In addition, both Worilds and Gibson are really superb athletes.  They are light on their feet and have tremendous skill-sets.  That translates into special teams contributors as well.  We've upgraded our special teams significantly during this offseason.

BTSC:  Other linebackers were also added in the draft and free agency, like Larry Foote.  Does that mean that maybe James Farrior will play more situational football this year?

Olsavsky:  That's not how we are thinking.  Farrior will play the same role this year.  He's our defensive leader and a really good one.  He played with injuries last year that people didn't know about.  James looks as good now as he's ever looked.

BTSC:  So what do we do with a glut of linebackers?  How many will make the team?

Olsavsky:  Usually eight, maybe nine.  You're right, we're going to have some tough decisions to make, but you want that problem.  The competition leading up to those decisions is what makes your team better.  Those guys are all fighting hard for playing time, to make the team, whatever.  That raises the quality level of the entire unit.

BTSC:  Last year we saw the defense collapse numerous times at the end of ballgames to lose in stunning fashion.  Is that something that the staff focuses on during the offseason, or are bygones bygone?

Olsavsky:  A little of both.  You always want to know why things happened the way they did, so you have to focus on what went wrong.  At the same time, players and coaches think differently than fans.  Fans focus on the ends of games.  That's their nature.  That's bottom line.  But players think about the plays early in the game that led to what happens at the end.  The end can't happen without the beginning.  Breakdowns in the beginning cause the end to be problematic.  We look at all those things, offense, defense and special teams.  We had eight straight games with a touchdown scored against us when the defense was not on the field.  If some of those don't happen, the things at the end don't happen.  So yeah, we're concerned about things that happened at the ends of games, but that's just a small part of what we're concerned about.  I remember the 1995 Super Bowl.  All the fans talk about is a couple plays near the end, but what sticks out vividly in my mind is how that game started.