There will be a lot of interchangeable and moving pieces tonight in Denver.  There are a couple of injuries and a couple of making their first start of the preseason at their position.  Therefore, I will give you a few notes on players and match ups you should watch for.  Thanks to SteelFever for discussing ideas with me.  Thank goodness we got a 'prime time' game so no one has to use unreliable streams by the way.

Ben Roethlisberger is taking the first few series of the game tonight.  After that, Dixon should be getting snaps with the 1s before Byron Leftwich.  So far, he has taken ever opportunity he has been given and flourished, having nearly a perfect QB rating thus far in preseason.  He has only thrown 1 touchdown so far, but has led many more scoring drives (let's be realistic here, he has Redman in the backfield, why would you not hand it off?).  Up until today there remains a shadow of a doubt because his performance has come against the 2s and 3s.  If he can produce as well today, the coaches really will have a really hard time decided who to start against the Atlanta Falcons in week 1.

Pouncey is starting at Center today while Justin Hartwig sulks at the end of the bench watching his job slip away.  'Slip away' is probably a bad term because it implies subtlety and the competition is not that close.  You may have forgotten what good play at Center looks like, but you will see it today.  There is no doubt in my mind that this kid is going to come out and win his match ups.  He is that good.

It has been really difficult to get a grasp on how Mendy has progressed since last year.  Every time he gets a hand off it seems like someone misses a block and he is dropped in the backfield.  That would explain his 13 yards on 13 carries.  I am excited to watch him today because of that guy listed above.  I think he should be able to make some holes for the Spin Dr.  Just please, please, please hold onto the ball Rashard.

Starter Bryant McFadden will not be playing today because of a pectoral injury.  That means that across from Ike Taylor will be my preseason favorite, Keenan Lewis.  Lewis has looked miles better than he was last year.  Against the Lions he beat one of the best WRs in the league, Calvin Johnson, on an end zone fade route.  I believe that the starter position for the 2nd CB is wide open.  Lewis has a very good chance of putting his name at the top of that list if he plays well tonight.  Moreover, this means that Crezdon Butler should be getting more snaps.  Butler is on the bubble for the 53rd roster spot and he has to show why he deserves that spot tonight.

Will Allen and Ryan Mundy

Ryan Clark will not be playing tonight because of his sickle cell trait and the high altitude of Invesco Field at Almost Mile High Stadium.  In his place, FA signing Will Allen will start and most likely split a good share of snaps with Ryan Mundy.  Both of these guys have looked smarter and faster than Tyrone Carter at the Safety position.  We should get a  good look at these guys and be able to get a good idea of what they can offer if Clark or Troy Polamalu get injured.  I am praying it looks better than last year.

Manny will be having a "big week this week" according to Mike Tomlin.  That is because Sanders will be playing 'Z', also called the flanker position this weekend (see diagram below).  He has been playing the slot position the last few weeks and really impressed the coaches with his routes and blocking.  Moving him to 'Z' will allow the coaches to see if he can play two positions.  From what I hear, Denver has some talented DBs, so he should be challenged. 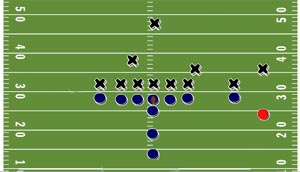