IX- If you were living under a rock this weekend or you were out doing things, you may have missed Dick LeBeau's induction into the NFL Hall of Fame.  For a long time, I had heard what a great person LeBeau was, not as a coach but as a friend.  Often, the players he coaches refer to him as "dad" when talking about him.  After watching his induction speech I think it is pretty easy to see his warm personality shine.  Congratulations Coach Dad, you truly deserve the honor and many more.

X- If you wanted to read a little bit more about the induction weekend there are a bunch of stories out there.  Here is one by the Tribune.  NFL Fanhouse. Post Gazette.  Columbus Dispatch.  If you have any more, please share in the comments. 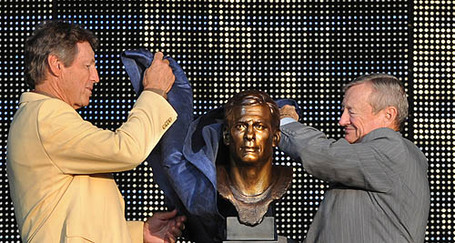 XIII- After the Steelers selected Jonathan Dwyer late in the 2010 NFL draft many fans thought we had gotten the steal of the draft.  Personally, I was very excited and thought he had a great chance of becoming the primary back up to Rashard before season's end.  Unfortunately, Dwyer has been a bit of a disappointment after reportedly showing up to camp overweight and getting an injury early.  Finally, he got back onto the field over the weekend.  However, more negative news is coming from his direction where Gerry Dulac reports that he got chewed out by Steelers RB Coach, Kirby Wilson, for missing a blocking assignment on a goal line drill.  Hopefully, Wilson can light a fire under his butt and get him going. 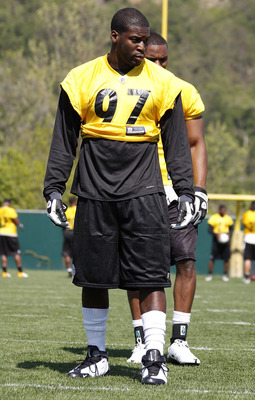 XIV- Pat Kirwan, a Senior Analyst for NFL.com, does a series of posts during the off season to cover all the training camps across the NFL.  Recently, he covered the Steelers camp.  Although, the majority of the post is information we have already heard around here, he does have a few good quotes.  He talks about rookie OLB Jason Worilds getting used to the speed of the NFL.  Apparently, he found out quickly that his speed rush to the outside got "neutralized" and he is now working hard on counter moves.  Also, he mentions how tremendous Ziggy Hood has looked so far in camp.  My favorite quote:

When the news broke about the Roethlisberger suspension, Bill Cowher told me that this team would quickly develop an "us against the world" mentality, and that they would be mentally ready to win in spite of the situation. There is no doubt Cowher had his old team pegged right.

XL- I have not seen any posts around BTSC about the weekend practices.  Over at Bleacher Report the Steelers columnist, Chris G., was at the practices this weekend.  The thing he noticed most about the drills was that our push from the offensive line looked weak on running plays.  He states that the majority of the run plays were short gains or losses.  While this news is rather discouraging, remember that it is still really early in the preseason.  We have a RT who has to relearn his footwork, a C coming back from a surgery, and Pouncey is not running on the first line...yet.  My prediction is that our offensive line and running game end up being better than last year.  Let's hope I am right for once. 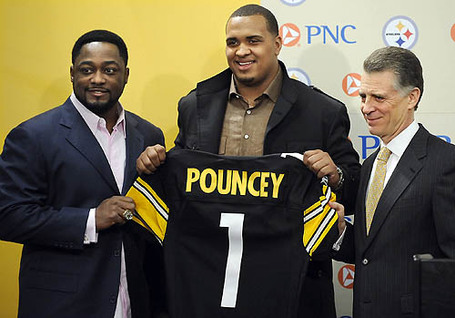 XLIII- Did anyone watch the Hall of Fame game last night between the Cincinnati Bengals and the Dallas Cowboys?  I caught the first quarter and I have to say I am concerned about their CBs.  They have a great #1 and #2 in Johnathan Joseph and Leon Hall.  They recently added criminal free agent Pacman Jones who looked very good last night.  He was aggressive, agile, and looked to be in the best shape since entering the NFL.  Still, the Bengals failed to score a point until the last minute of the game.