I've written plenty since the conclusion of the Pittsburgh Steelers 15-9 Week 1 victory over the Atlanta Falcons, yet I have to say much about the play of quarterback Dennis Dixon on Sunday.  So how did I think he fared? I was neither overly impressed, nor concerned or disappointed by his performance. Mostly, I was just proud of how he handled himself, and proud of the fact that he was starting a game in the National Football League. I didn't follow Dixon in college or anything like that, it's just nice to see a hard-working young guy get an opportunity to perform after enduring some of the setbacks he encountered while still at the University of Oregon.

First, a look at his numbers on the afternoon:

Nothing spectacular, but Dixon did complete a high percentage of his passes as well as pick up some sizeable chunks of yardage on several of his completions.

Here's the deal though: Dixon was clearly nervous. Extremely nervous. And I don't blame him. First start ever at home, first game of the season, etc. When you're nervous, you don't breathe as regularly and fully as you normally do. The result is a lack of blood sent out to your extremities...A quarterback's throwing arm would fall in that category. The few throws that Dixon missed badly on were ones that he threw too low for his receivers to make a play. We'll look at some of those throws actually, but for now, I'll just say that those misses weren't a product of poor mechanics, or a lack of talent. Instead I think they were the result of nerves, plain and simple. And obviously I think he can overcome that feeling of nervousness as he continues to be thrust into the spotlight this next few weeks.

Dixon also engineered more successful drives than the final score might suggest.. Let's take a look at some of those drives, and some of Dixon's throws on those drives beginning with what I felt was one of their best series of the afternoon. It also happened to be the drive that ended with a Dixon turnover. Of course, it's easier to remember the big mistake than it is the things he did right that set up the turnover in Falcons' territory.

After leading the team down the field on the first drive of the game for a 52 yard Jeff Reed field goal, the offense went three-and-out in its next three possessions. Then, on the team's fourth drive, Dixon got things going once again. The Steelers took over at their own 7 yard line with 9:11 remaining in the 2nd quarter and the score stuck at 3-0.

Three consectuve runs picked up a fresh set of downs and took the Steelers out to their own 21 yard line. Then Dixon connected with Miller on a nicely designed and well executed 17 yard pass to Heath Miller. 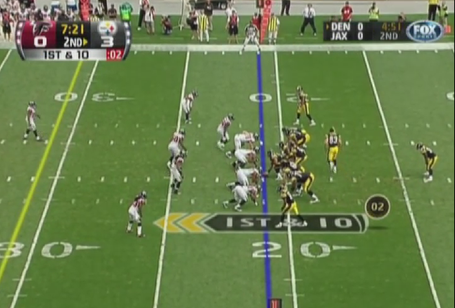 In the frame above, notice Miller, who's in motion from left to right. 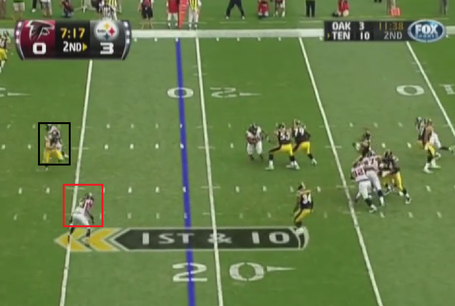 Miller has juked the linebacker trying to cover him nicely, and now has the half step of separation he needs to make a play. BUT, only if Dixon gets the ball out quickly before the linebacker below can close that distance. It seems like a big window, and it is in some respects. But remember, 6 yards windows in the NFL close in less than a second...literally. Thankfully Dixon is stepping up into the pocket nicely and is set to get rid of the ball. 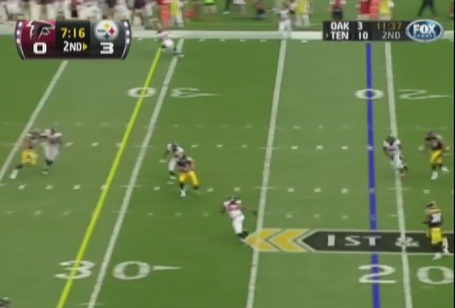 The ball is on time and Miller catches in in stride with just enough real estate ahead of him to rumble for 17 yards and a first down. After a two yard run by Mendenhall, Dixon made an even more impressive read and delivery. 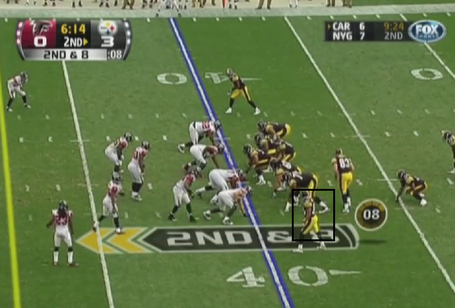 Same formation, with Miller going in motion once again. BTW, notice the two back set and how the Falcons subsequently bring 8 men into the box? Didn't think Brucey Bruce had it in him did you? 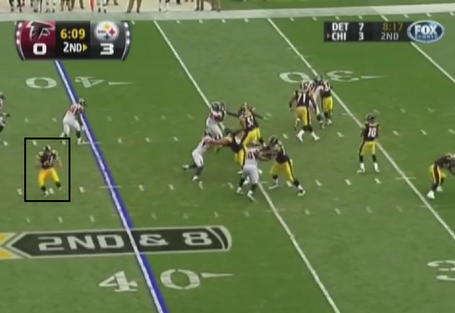 I boxed Miller because he was again open and available for Dixon to throw to. My guess though is that Dixon realized that 8 Falcons were in the box pre-snap and knew he would have something at the next level. And he did, Hines Ward working 1-on-1 against Dunta Robinson. 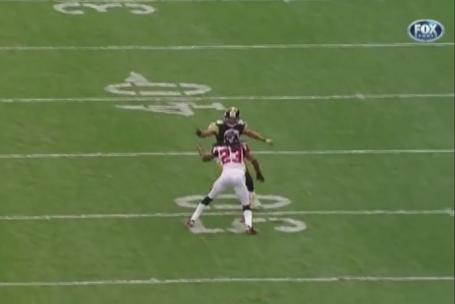 Here are Ward and Robinson about 10 yards past the line of scrimmage. Ward has Robinson just slightly off balance at this point, which in a split second he's about to take advantage of. 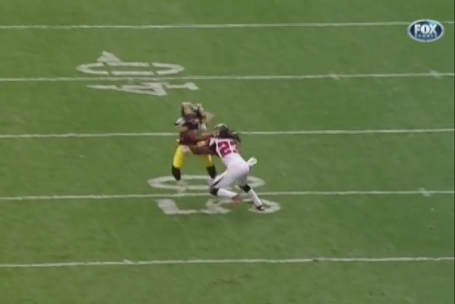 Ward cuts back towards the post, gets his hands on Robinson's still not quite level shoulders, and creates the separation he needs to get open. Robinson of course, is a very competent corner, so Dixon must get rid of the ball quickly before he recovers and before Ward drifts too far towards the Falcons safety. 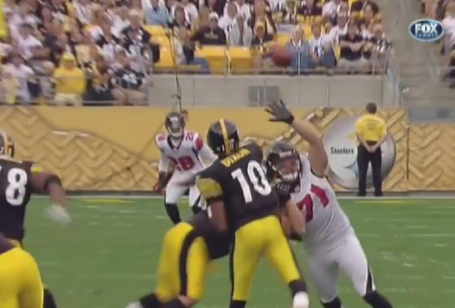 At 6-3', Dixon sees just that thanks to standing tall in the pocket (and good pass protection of course). 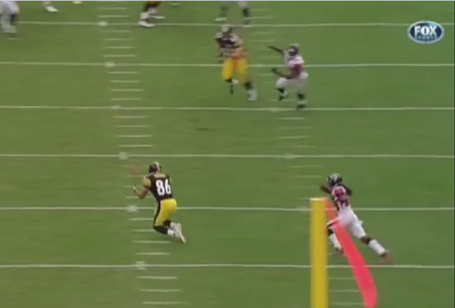 Strike. Of course, Hines has the presence of mind to get back up after rolling over twice while cradling the catch. He picks up a few more yards, makes the Falcons DBs be physical and bring him down, and of course, gets the Heinz Field faithful in a frenzy with his 24 yard catch. The Steelers are now inside the Falcons 40 on what's looking like the best offensive series of the half for DIxon and the offense. And team captain Ward knows that his young quarterback has just made a bigtime throw to get his team in position to potentially add points before the half. 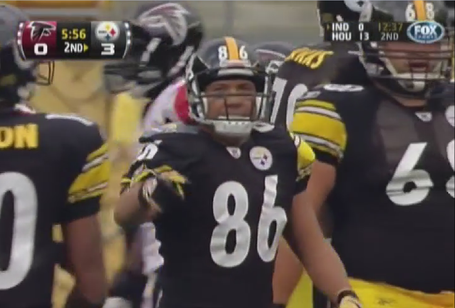 Unfortunately, Dixon made a mistake two plays later and threw his lone interecption of the game. We'll take a look at that throw, as well as some of the offenses' other series next.