Steelers Rarely Win The Battle Of 'Style Points', But When It Comes To Freezing Kickers With Timeouts....

Share All sharing options for: Steelers Rarely Win The Battle Of 'Style Points', But When It Comes To Freezing Kickers With Timeouts....

As as I was re-watching the tape of the Pittsburgh Steelers' 15-9 overtime victory over the Atlanta Falcons in conjunction with writing about Dennis Dixon's performance, I got slightly sidetracked. I've got plenty of thoughts to share on Dixon, replete with pictures and video to compliment my observations. But it's getting late, so I'll put that aside and end my evening with some pictures that surely you remember from Sunday's telecast.

Thanks to color commentator Jim Mora Jr who noticed this as it unfolded, (with the help of the production team at FOX of course) viewers got a good glimpse of just how much cooler Mike Tomlin is than his colleagues in the head coaching ranks of the National Football League.

As time wound down in the first half, Falcons head coach called a timeout just as Jeff Reed was about to attempt a 55-yard field goal with :22 seconds remaining. Reed had banged home a 52 yarder earlier in the game. This obviously influenced Tomlin's decision later in the half with the Steelers still clinging to that 3-0 lead. Of course, many might reasonably criticize Tomlin's decision to attempt such a long field goal there. For starters, nobody makes FGs of that length at Heinz Field. A better argument though is the fact that a miss there and the Falcons have a legitimate shot at picking up cheap points at the end of the half after the defense had done such a stellar job for the first 30 minutes. As for the first point - well, as was mentioned, Reed was true on a similarly long FG earlier in the game, and being that it was just a few short days after Labor Day, conditions weren't exactly brutal at Heinz Field on Sunday. For what it's worth, Reed's kick, which clanged off the right upright, had plenty of distance. In fact, had the attempt been from 60 rather than 55, it would have been good. As it happened though, the kick caromed off the post and took an non-fortuitous tumble short of the cross-bar. The decision backfired, but that's not the point here.

This exercise merely examines the different ways in which Tomlin and Smith go about getting the attention of the officiating crew in order to call a last-second timeout right before the snap on a FG attempt. First Smith's attempt at freezing Reed in the 1st half. 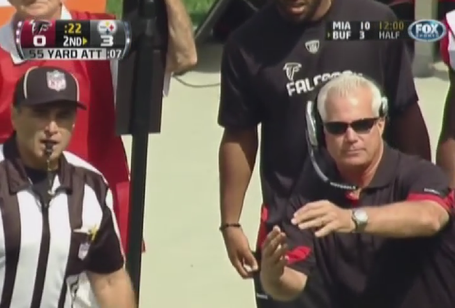 Solid posture, knees firmly bent at the knees, 3rd base coach sunglasses on.  Is the ref paying attention though Mike? 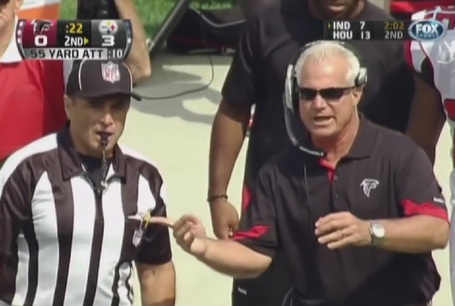 You bet. Never forget to point that finger. Mission Accomplished.

Now, a few short plays later following Reed's miss, Tomlin was in position to deploy similar gamesmanship. With just a few ticks left on the clock in the first half, Matt Bryant lined up a potential game-tying FG.

Tomlin, perhaps still a bit irked that his strategy had backfired, remained poised as he calcualted the exact right moment to call time: 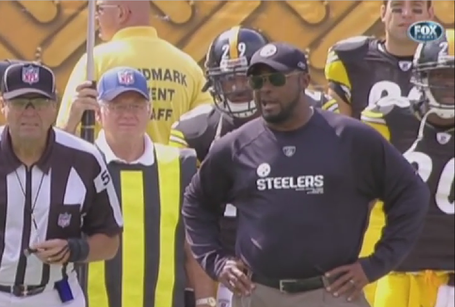 Hands squarely on hips (though not in a 1986 gym coach type-of-way, Tomlin hollers for time out of the side of his mouth. His technique and approach suggest he's perhaps been conditioned by his superiors to minimize the possibility of Bill Belichick intercepting valuable information either vis-a-vis real-time satellite pictures, or from the crew of world-class lip readers Belichick strategically positions throughout stadiums each week.

Or maybe Tomlin's just one cool customer; a veritable badass compared to many of his AARP-eligible and comically high-strung colleagues.

Smith, despite halftime reminders from  his 'image quality control coordinator' that the Falcons stood no chance at landing free agents next summer if he kept looking so stiff,  couldn't help himself when presented with similar circumstances late in the 4th quarter. Again, to the pictures... 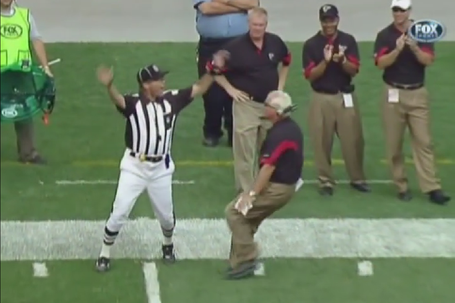 ('I said timeout! Do zebras speak English? My fuc*&ng God!') 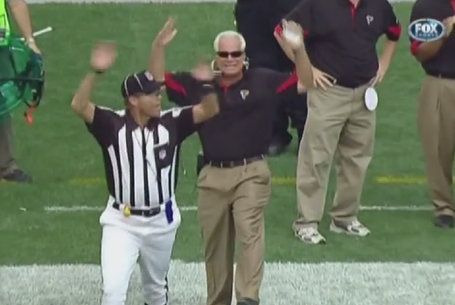 ('Get your damn HANDS IN THE AIR. Timeouts don't call themselves you degenerate waste of space! Which member of the Heinz family do you sleep with for Christ's sake?!?!') 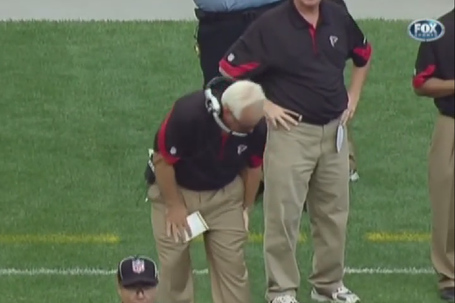 ('Nag-damnit. Stupid wife is going to say 'I told you so' about not taking my blood-pressure meds. Damn quarterback of mine had me all calm and relaxed all summer with his mild-mannered ways.') 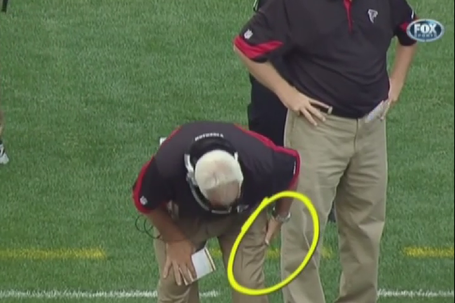 ('For fuck's sake. What's a telestrator doing circling my hammy? Madden, is that you? Aren't you retired? . Don't worry about me, just make sure one of the refs stopped sniffing their sister's panties long enough to stop the damn clock!'')

I'll stop. In all actuality, Smith seems like a great coach and leader of men. But my goodness, let this be a lesson that you can call a simple timeout without risking life and limb. Believe me, the game won't come down to the intensity with which you express your desire to stop the clock.