Share All sharing options for: Steelers Defense Clamps Down Early, Doesn't Let Up Despite Muggy Conditions

I might begin to be sounding like a broken record, but I'm compelled to spend yet another post looking at just how dominant the Pittsburgh Steelers' defense was on Sunday during the team's 19-11 victory.

The Tennessee Titans accumulated 238 total yards in 61 offensive plays on Sunday. If my calculations are correct, 167 of the total, or roughly 70 percent, occurred in either the first half of the first quarter, or in the final five minutes with the Steelers up by a full two scores (two touchdowns and two two-point conversions).  That's a hefty portion of a team's output confined to just 22 percent of the game's 60 minutes.

While re-watching the game, I found a specific moment that marked the beginning of a remarkable string of futility and mistake-filled football for the Titans. It happened  right after the Titans began their second series at the 40-yard line inside Pittsburgh territory  following a 38-yard punt return.  The Titans pieced together two well-executed plays to put themselves inside the redzone. It began with a 13-yard screen play to fullback Armhad Hall - a play actually that might have been the first and only poor play from James Harrison and Lawrence Timmons. 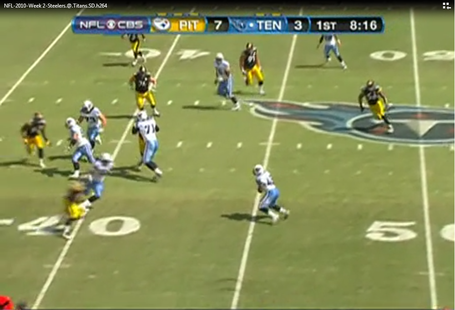 I suppose Harrison may be trying to not let Hall get to the edge, but really, it was just a perfectly timed screen play. Timmons though is about to miss a tackle. 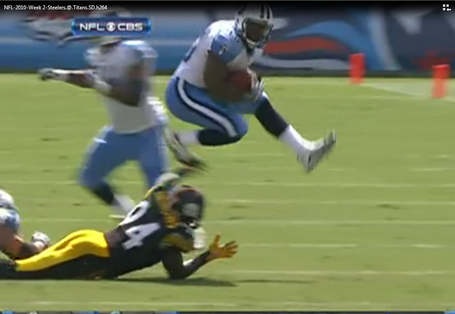 Nifty move by the compact Hall. What can you do. The Titans then ran Chris Johnson for 8 yards, his second longest of the game the set up a 2nd and 2 inside the 20 at the Steelers' 19. That's it. In my mind at least, this is the turning point of the game when Dick LeBeau's defense (with the help of the Titans' offense) tightened the screws and thoroughly dominated for the next 47 minutes.

The Titans walked away with no points on that trip inside the redzone thanks to, who else, Troy Polamalu, who picked off his 22nd career pass and second of the season on this play. 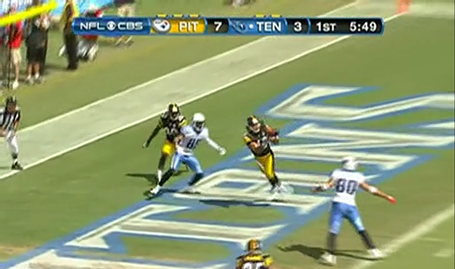 Bad read and late throw by Vince Young and the Steelers escape the series with their 10-3 lead still in tact.

Here's an overview of just how futile the Titans' next ten series were before their late, desperation score.

29 plays, 10 yards, 5 turnovers. Incredible.  And to think (greedily)... had Kerry Collins' fumble on the first play of their touchdown drive not bounced right to a teammate ...  Regardless, we may not ever see the defense of the Pittsburgh Steelers be that dominant over the course of a 30-play stretch ever again.