Note: This was written by maryrose. I merely posted it for him. Many, many thanks to him for the fine collection of stories he shared in the lead-up to the 2010 season. Be sure to check out the rest of the countdown if you're encountering the series for the first time. - Michael Bean -

This will complete my Top 12 Greatest Wins in Pittsburgh Steelers' history. I hope you enjoyed reading the series as much as I enjoyed writing it. I did not include Super Bowls, as they would eat up half the series! Obviously this countdown is just one person's opinion - there is no right and wrong, just fun.

The history of the Pittsburgh Steelers is a tale of two halves. The 1972 football season, for all practical purposes, is the equinox of Steelers' history. In the 39 years that Pittsburgh played pro football before that 1972 season, life was not so good. The Steelers were riddled with calamity, tragedy and, for the most part, failure. They had never won an NFL playoff game and had only played in one (1947). We fans who remember life before the 1970 NFL merger were sadly convinced that success was never going to happen. We were sure that the Steelers would forever be Charlie Brown in a world of Lucies. But we loved the team anyway, unconditionally.

On December 23, 1972, all the mythical football gods who punished the Steelers unmercifully for 40 years, punished the Rooneys and punished the fans of Pittsburgh, decided that enough was enough. The visiting team was the Oakland Raiders and the temperature was a pleasant 42 degrees with just a touch of wind. History was about to change its course forever.

For those newer Steelers' fans, I will give the details of this game, with apologies to the many who know the story like the backs of their hands. The Steelers outplayed the Raiders, but at halftime the score was 0-0. Roy Gerela's field goal in the third period gave Pittsburgh a 3-0 lead. He doubled it in the fourth quarter with another field goal. Meanwhile, the Raiders were shut out. It is significant to note that Oakland had seven Pro Bowlers on offense, yet could not score against the Steel Curtain defense for almost 59 minutes of football. 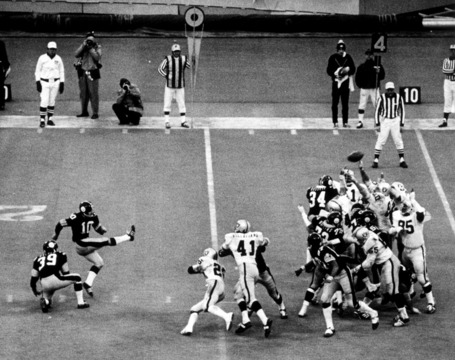 Oakland was driving at the end of the game, led by quarterback Kenny Stabler, who replaced an ineffective Daryl Lamonica. With a little over a minute to play (1:13), Stabler scrambled left on a broken play and scampered untouched into the end zone from 30 yards out. Oakland, in stunning fashion, led the game 7-6. On the previous play, Steelers' right defensive end Dwight White injured his leg and was replaced by Craig Hanneman. A key responsibility for any defensive end in the 4-3 scheme is outside containment.

The Steelers had one more desperation chance, and not a promising one. George Blanda's ensuing kickoff hit the goalpost, eliminating the possibility of return. Pittsburgh had the ball on its own 20. Two short pass plays, one to Franco Harris and one to Frenchy Fuqua, brought the ball up to the 40-yard line, but now there were just 37 ticks left on the clock. Pittsburgh then suffered three incomplete passes, two of them to rookie tight end John McMakin, broken up by Oakland's Jack Tatum.

The Steelers found themselves with a fourth-and-10 at their own 40-yard line with just 22 ticks of the clock remaining. Calling the "66 Circle Option Play," a pass to Barry Pearson, Bradshaw rolled right, ducked a defender and fired down the middle to Frenchy Fuqua (the second option). Biblical consequence is often associated with the number three - Three Wise Men, the Holy Trinity, Peter denying Jesus three times after the Last Supper, etc. Ironically, at a place called Three Rivers Stadium, at the 33-yard line, Fuqua, wearing number 33, Tatum and the football converged much the same as the Ohio, Allegheny and Monongahela rivers. The ball took a hard ricochet backwards. Franco Harris, who was running down the field to make a block, was in the right place at the right time to snag the ball off his shoe tops. He ran to pay dirt. 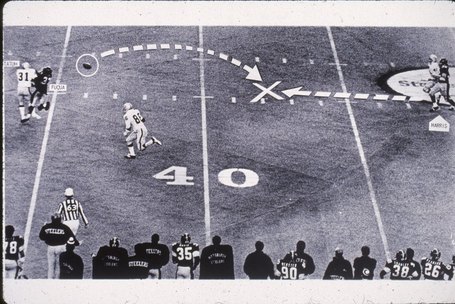 It seemed like forever before the Steelers were allowed to kick the extra point. Referee Fred Swearingen called up to the press box to confer with Art McNally, NFL supervisor of officials, and two other league cognoscenti, Jim Kensil and Val Pinchbeck. This was unprecedented, prior to the days of instant replay. In reality, this was the first time that any play had ever been reviewed, albeit in informal fashion. McNally insisted that instant replay was not a factor and that all he did was encourage Swearingen to make his call. Be that as it may, instant replay was unofficially born on that play.

There were two issues on the play. The first was whether the ball had touched Fuqua prior to the Harris catch. Not until 1978 did the rules allow two offensive players to consecutively touch a forward pass. Though obviously very close, I never bought that complaint. Simple physics would lead you to believe that in order for the ball to ricochet so hard backwards, it probably hit the man who was moving in that same direction (Tatum), as opposed to a man moving laterally across the field (Fuqua). To this day, Fuqua has not revealed his opinion. Frankly, I am not sure anyone really knows the truth, even the players involved. Everything happened so quickly.

The second issue was whether Harris caught the ball before it hit the ground. I still have my doubts about this one. Nevertheless, there was no one, at least with any jurisdiction, who saw the ball hit the ground and there is no replay shown to this day that would show one way or the other. Swearingen had no choice but to let the play stand.

"I learned early at Penn State to always be around the ball, be around the action," admitted Harris. "Maybe there will be a fumble. Maybe I'll throw a block. Because of that attitude the play happened."

The Steelers finally won, 13-7, in a game that would soon be known for the "Immaculate Reception." Steelers' announcer Myron Cope spread this label after receiving a phone call from a fan following the game. There was some trepidation as to whether this label was sacrilegious. Art Rooney, a devout Catholic who attended mass daily, rightly expressed concern over mixing religion and football. Nevertheless, Rooney had no control. Once Immaculate Reception began spreading it took on a life of its own. Besides, if the Hail Mary pass can be an innocent part of football jargon, why not Immaculate Reception? 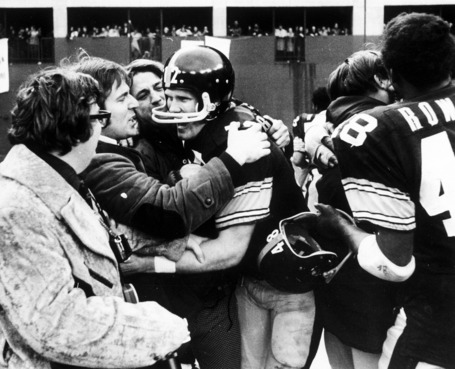 "We hadn't had anything like that happen to us in our history," said Art Rooney II. "It was a special moment. People there didn't believe what they saw."

Ironically, the Chief himself had a hard time believing what he didn't see. Mr. Rooney had gone to the elevator prior to the play to console his players. On the way down, the elevator stopped to pick up a young Mike Silverstein, a press box worker who is now a great friend to BTSC and accomplished writer. It was Silverstein who informed the Chief of what happened, a memory that he shared with us in the 2009 Steelers' edition of Maple Street Press. 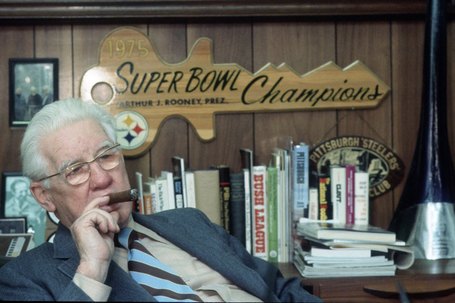 Many fans believe the 1974 AFC Championship Game against the Raiders was the "greatest" non-Super Bowl win in franchise history. Whereas the 1972 squad carried the weight of a 40-year albatross, the 1974 team was liberated by the Immaculate Reception. Without the psyche of demons buried and subsequent experience gained in the 1972 Championship Game, perhaps 1974 does not even happen. Throughout the week leading up to the '74 title game, Chuck Noll kept telling his players and the media, "We've been here before and we know what it takes." The only reason the team was there before and knew what it took was because of the Immaculate Reception.

The 1972 game was not only the team's first playoff win, it goes far deeper than just being the greatest win. Nationally, it was a moment to which the most famous moniker in NFL history has been attached. Locally, it was the line of demarcation that separated evil from good, frustration from jubilation. The entire mindset of an embattled franchise was altered by one miraculous play. The Immaculate Reception, whose legacy became the greatest dynasty in NFL history, exorcized the ghosts of autumns past in the blink of an eye.

(Tim Gleason, aka maryrose, is the author of the highly acclaimed new book From Black To Gold: The Pittsburgh Steelers)