That's What They Said: Tharee and Oh.

Share All sharing options for: That's What They Said: Tharee and Oh.

How many wins did it take for for the Steelers to get to the center of football interest?

The world does now know.

After a great victory over the previously unbeaten Tampa Bay Bucs, all of a sudden Pittsburgh is becoming the favorite pick of analysts everywhere. I know, I was shocked too. Let other teams win the offseason, we'll win when the season starts.

"You see how I slowed down to use my blockers? (later) We practice that play all the time. When a guy gets a pick, we all run to the ball and look for someone to block. That's been a difference for this team in a Super Bowl here."

It was kind of hard not to think a little about Harrison's great return in the Superbowl while watching Keisel run that interception back for six. Even he thought so afterwards. Good for Brett the Beard, he deserved the TD after being so generous to Hampton last week. Karma people, it's going around.

George Whitfield talking about Ben Roethlisberger, who is back from suspension next week going into the bye. Whitfield is the quarterbacks coach who has been working with Ben during his imposed exile to Alba an area high school. Roethlisberger has been throwing to pre-collegiates and Devard Darling.

"It looks like from the outside ‘God, boy, you can’t catch a break. At the same time you can’t judge everything on football. There’s a whole world out there."

Steelers current second string quarterback, Byron Leftwich, via a slightly older write upfrom the Trib's Blog. Leftwich goes into this weeks game as the number two, while still recovering from the knee injury that might have given way for Dixon's shot. Which led to Batch's shot, all starting with the void left by Ben... I guess I still can't get over how well all of these guys have taken the shuffling under center. True professionals all around, putting the team first.

"I was just hoping to get an opportunity. For me, the one thing I didn’t want to do was to come out and be that weak link. I wanted to go out and provide a spark and put this team in the end zone."

And Charlie Batch did, thrice. Could have had four, but almost as easily could have had one. Either way, what he actually did was great, with two long bombs to Wallace, a great, poised, veteran throw to Hines in the back of the endzone on a third down through traffic. Either way, get some more great quotes from James Harrison, Hines Ward and Coach Tomlin in this article, revealing the surprise of our success.

Keeping an Eye On Our Opponent

"Am I a little biased here?  I just think that we both have two solid, solid groups.  The thing that you see most about the groups is that we have played with each other for some years now.  Definitely, me and Suggs and things like that.  We keep losing people here and there but we keep getting a couple of guys to step up here and there.  Pittsburgh has been playing together for years as well and that is what I think that creates that type of unit to where you can play.  Free agency is so crazy these days you just never know who is going to be where, what year and everybody is chasing the big bucks, and truly understanding it and respect it.  But keeping these units together isn’t like the Pittsburgh back in the day when they were able to keep Lambert and these six or seven linebackers.  We can’t do that nowadays so if you are able to keep one or two good ones then guess what, you can create something going around them."

A slightly longer quote, from Ray Lewis, discussing the linebacking corps of the Steelers and Ravens. Ray gives a nice tip of the hat to the Steelers (as well as some interesting math). This goes into my thinking behind the resigning of Larry Foote, that the relationship between linebackers, and how each has to know where the other is at all times, as well as knowing where each other is going to be, is premium when talking about a good unit.

More from Ray Ray, this time regarding Big Ben. This from an article posted here by WETSU. I think that sometimes it's easy to assume that because these guys are on fieldrivals, that they must dislike each other off the field. Safe to say that isn't necessarily the case. Ray also says there are "many people he hits (with a text)".

See? Friends. This is a friendly hug. 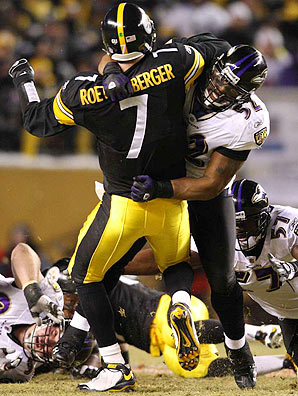 "Trevor is a valuable part of this team.. He'll be back with us."

In the surprise move of the day, the Ravens released DE Trevor Price yesterday. In this statement to Ravens Insider, head coach John Harbough basically said that this move was a roster spot freeing move, a la what we did with Byron Leftwich week two. This is Pryce's fifth year in Baltimore, and was widely respected amongst fans and teammates alike.

Steelers versus Ravens are my two favorite weeks of the season. These games always test both teams, and each walks away better for it.