BTSC Daily Six Pack - Are You Ready for Some Football Edition

Share All sharing options for: BTSC Daily Six Pack - Are You Ready for Some Football Edition

IX- ESPN does the best set of power rankings around the NFL, at least by the layout.  They just posted their week 1 rankings and the Steelers came in 18th (one up from their preseason ranking of 19th).  The note on us is that it is "time to see if this team can win without Ben Roethlisberger."  That is not the most insightful comment, but it rings true for the first four weeks of the year.  Better yet, I would rephrase that to "Can Dennis Dixon command this offense and lead them to victory?"  That sounds much better.

X- Adam at Steelers Lounge thinks that Mike Tomlin is really good at saying things without saying things.  I must admit I was a bit annoyed when the comment was first posted here.  However, the story on ESPN had only the second part of the comment and left out the preceding sentence, "I’m going to dodge that one and not artfully."  Anyway,  I believe that user smashtheguitar had the perfect take on the comment:

This is meant as motivation for (1) Big Ben to continue to work to pull it together, (2) Dixon to say "Hey, we’ve got some confidence in you and we’re not just counting the days until you get back to riding the bench," and (3) PR for the media to solidify the front office’s stance on player conduct. 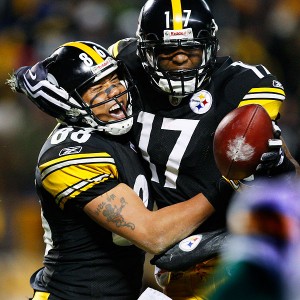 XIII- FC, a writer for Steelfury, wrote a nice article on Tuesday breaking down all of the positional match-ups along the offensive and defensive lines against the Atlanta Falcons.  Additionally, he gave a bit of insight on his views of the skill position match-ups.  He believes that the Falcons will load the box and force the Dixon to beat them in the air.  He believes that we have advantages in Heath Miller versus their LBs in coverage, Mike Wallace deep on Dunta Robinson, and Hines Ward being more physical than Chris Owens.  I have to agree with him that if we are going to win we need big games from these three guys.

XIV- Do you want to feel a little bit more confident about Dennis Dixon starting?  Ed Bouchette gave me a good burst of confidence with his article from this morning on DD.  Dixon had the 4th best completion percentage of any QB in the preseason and still holds the career completion percentage at Oregon.  I believe that if Bruce Arians can orchestrate an offensive plan that can utilize his feet and his accuracy we could have a dangerous offense.

Steelers At Falcons 96' Primetime (via jeromefromse)

Sort of unrelated to the Steelers.  I just bought PS3 and Madden '11; that is the first time since Madden 2000 I have owned the game.  Anyway, I started a franchise, but my roster does not match the Steelers current roster.  Does anyone know how I can download every team's current roster?  I had to sign Brian Westbrook because I did not have Isaac Redman.  Thanks in advance.