Let's take a look at how some of the more marquee offensive players on the Pittsburgh Steelers have fared over their respective careers in the playoffs.

Interesting Fact #1: Like he was for much of the early stages of his career, Ben Roethlisberger was a feast or famine type of quarterback in his initial postseason appearances. As a rookie, Big Ben won his opening game against the Jets, but his rating was under 60 and he threw 2 picks in the W. The following week against New England, Ben threw 3 more INTs in defeat.

The following year, Ben was amazing in the opening three rounds of the playoffs vs, Cincy, Indy and Denver. He threw 7 TDs to just 1 INT en route to winning the AFC. Teams were looking run all the way, and OC Ken Whisenhunt called on Ben to put the Steelers ahead early with the passing game. He did just that, jumping out to leads early in both the Indy and Denver games. Then, after three straight games of excellence, Roethlisberger had a sub-par game in the Super Bowl, only to have his teammates pick up the slack and finish off the Steelers' improbable run to Lombardi No. 5.

Interesting Fact #2: In his two career playoff losses, Ben has throw 3 INTs in both games. In his 8 career Ws, Ben has thrown 2 INTs on just one occasion - in the Steelers SB win over the Seahakws. In all other 7 wins, Ben has thrown no more than one pick, with four games thrown in there without a single INT.

Interesting Fact #1: Ward has 3 career playoff games with 10+ catches which is exactly three more games with 10+ catches than Terrell Owens, who has also appeared in 11 career playoff games. No huge surprise that No. 86 has been more productive than the future Hall of Famer Owens in the post season. What about other future potential Hall of Famers? Like, say, Reggie Wayne. Well, the Colts standout WR has appeared in 17 postseason games, catching 83 passes for 1128 yards and 9 TDs. Ward's pace is better. How about Randy Moss, also a lock to be enshrined in Canton someday? The mercurial Moss has appeared in two fewer games (12), catching just 47 passes, but amassing 865 receiving yards and a notable 10 TDs. Still, Ward's numbers definitely stack up.

Interesting Fact #2:  Ward has 3 career games with 10+ catches in the playoffs, and 5 career games with 100+ receiving yards. Thus, with such a high percentage of his postseason games being extremely productive, it's hard to say which game was the best. The most meaningful would obviously be the SB, where he caught 5 passes for 125 yards and 1 TD, including that legendary TD catch thrown by Antwaan Randle El.

Interesting Fact #1: I'm not sure there's necessarily an 'interesting' fact, at least statistically speaking, about Miller's postseason resume. Here's what I do know though. Miller was instrumental in Pittsburgh's run to Lombardi No. 6 two years ago. In the Steelers' three postseason games in '08, Miller hauled in 11 receptions, with at least three catches in all three wins. (That last sentence is kinda like an SAT logic question, no?) Against San Diego in the Divisional Round, Miller had the opening score of the third quarter, which extended the Steelers lead to 21-10. From that moment on, the Steelers thoroughly whooped the Chargers, possessing the ball for almost the entire 3rd quarter, and then keeping the foot on the gas just enough in the fourth quarter to seal the win and advance on to the conference championship game against the hated, dirty Ravens from Baltimore.

Miller played a similarly crucial role int he win against Baltimore, catching just three passes, but picking up a healthy 62 yards in the process. I wanted to harken back to this one play featured below because I think it's a perfect example of the type of play the Steelers will need to make if they're to beat the Ravens this coming Saturday. Let's take a look at the play first before I explain.

As you can see, the Steelers are in the two-minute drill prior to half, up six, 13-7. 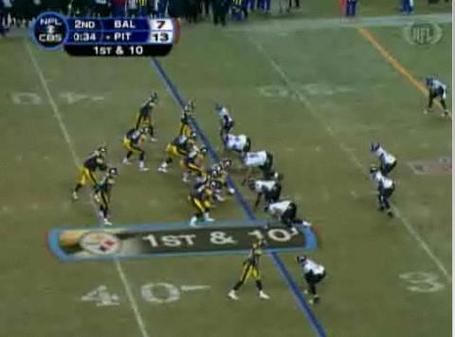 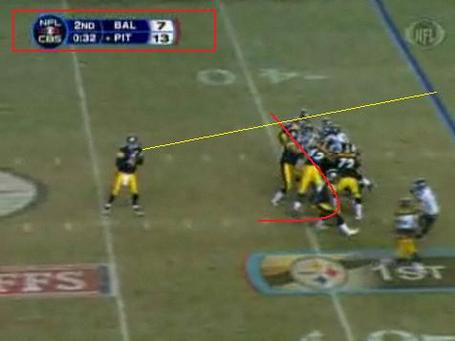 Two seconds into the play and Ben has a very solid pocket in which to stand tall and survey what's materializing down the football field. You'll notice though that Chris K. is beginning to get pushed back by the beastly Haloti Ngata. Like the great ones are able to do, Ben instinctively senses where to slide to in the pocket without getting flustered and turning his eyes away from what's materializing in front of him down the field. 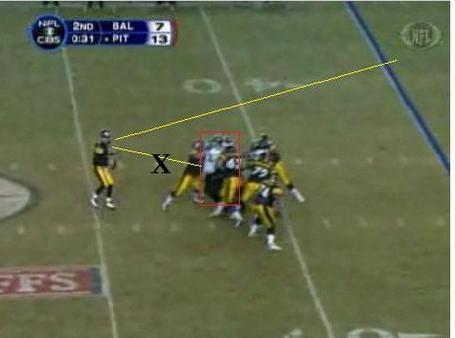 Chris K has regained his footing to a degree in the frame above, but Ben has already started to shuffle to the left, all the while keeping his eyes down field, not on the impeding Ravens pass rusher. 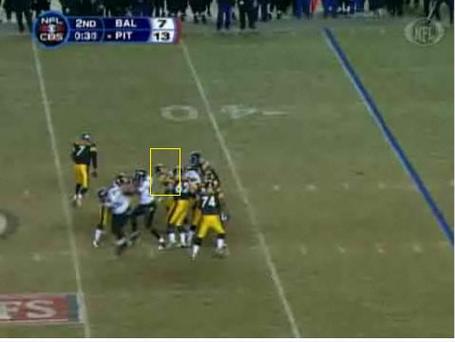 We're now a good three seconds into the play - just about the time the internal alarm clock in a QBs mind goes off.

I have an arrow on Heath Miller here because No. 83 realizes Ben has taken off from the pocket and that he can either go block, make himself eligible as a receiver, or serve as a decoy. Something. No longer needing to stay with his offensive lineman to help block and create a pocket, Heath is about to take off to help his QB. 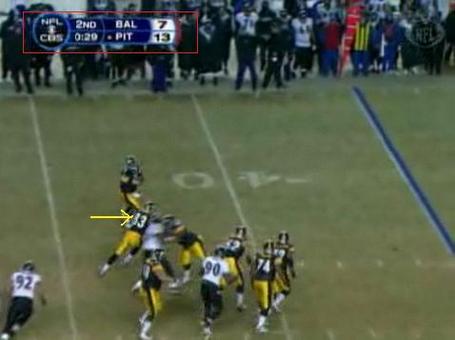 We're a good 5 seconds in to the play, which basically means we're playing sandlot football.  Heath has now escaped and is heading down field to make himself available. Something he's able to do only because Max Starks has got his man locked up and there's no one else to account for. Notice Ben's eyes are still down the field here in the frame above. 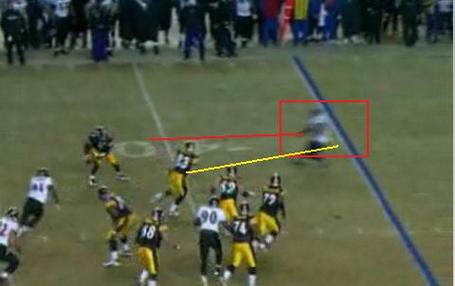 We now see what's about to hapen, as a Ravens LB has committed to attacking Roethlisberger. He could have stayed with Miller and let the guy chasing down Ben force the throw. He does not though as we're about to see. 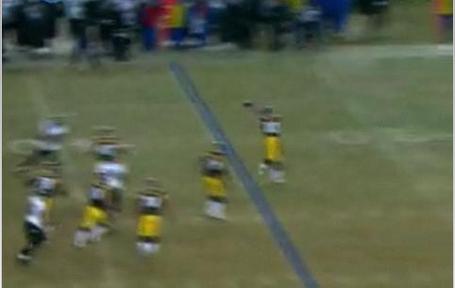 The snap took place with :34 seconds left. Heath makes this catch with :28 seconds left. As I remembered this play, I actually was puzzled by how in the hell this didn't lead to points. I mean, look at the yard markers in the pictures. Well inside field goal range in Ravens' territory. I'd actually have to re-watch the tape, but from looking at the play-by-play online, it simply looks like the Steelers mismanaged their timeouts and the clock by allowing the final seconds of the half tick away before they could even attempt a field goal. Let's look into this and remind ourselves what happened, actually.

Anyway, I highlighted this play because it's a great example I think of the type of improvisation and instinctual play-making the Steelers will need to get past a Ravens team that knows them inside and out.