Packers vs. Steelers Through My Eyes, Part II: The Defense

Share All sharing options for: Packers vs. Steelers Through My Eyes, Part II: The Defense

Well, folks, you know the drill.  Here's another head-to-head comparison of the defensive players on the starting roster for both teams.  And may the best men win!

But before I dive into the visual evidence, I want to make it clear that I welcome feedback from our friends at the Acme Packing Company. Part of the fun of a big game is debating the pressing issues, and what could be more pressing than upholding the honor of our beloved teams?  I only ask that Packer fans back up their assertions.  A better photo of a disputed player, for example, would be helpful. I do want to say that I did my best to find the most flattering photo of the selected Packers players. For whatever reason I found a better variety of photos for the less-known Steelers than for their Packers counterparts. I had no intention of setting up a straw man to take down.  Our Steelers don't need any such assistance from me!

This time I'm going to start with the line and work my way back to the more visible players.  Therefore we begin with: 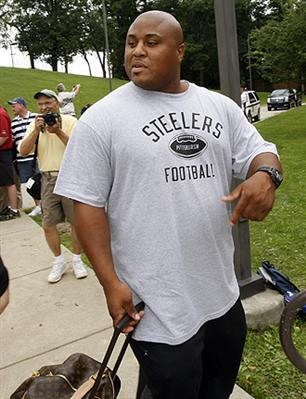 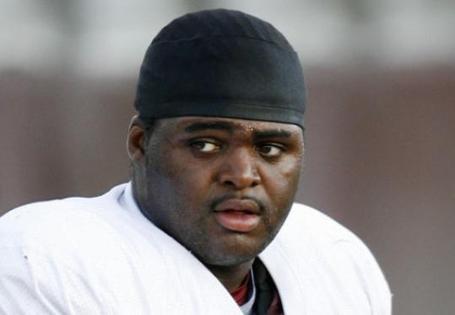 Tough call here.  I still have nightmares about the Sports Illustrated cover with Hampton's tummy on it.  But they sure as heck do their jobs in the middle of the defense.  I'm going to declare this a draw. 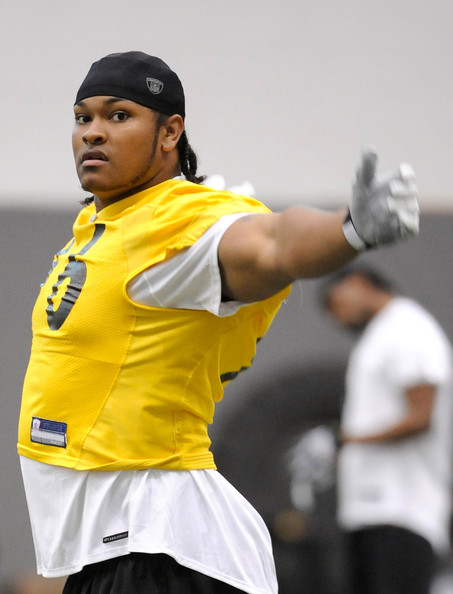 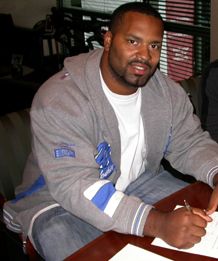 This is also a tough one, for the opposite reason.  Both are fine-looking men.  But I have to give the edge to Ziggy's exotic eyes and fabulous cornrows.  (Check out other pics on the web for details, Packers fans.)

Once again I'll pick one representative for each team.  My picks are: 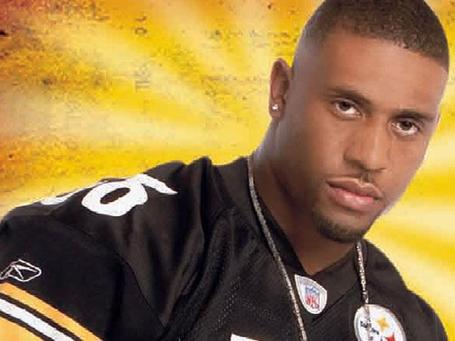 It was a tough pick to make for both teams.  Partly it depends on what you're looking for.  On the Steelers side, are you looking for someone to date your daughter or someone to guard your back?  On the Packers side, are you looking for flowing blond locks or trailing black dreads?  In the end I choose Woodley because he isn't as scary-looking.  Please don't hurt me, Deebo!  And I chose Walden because Clay Matthews is going to get his due in another area.

It's also a tough choice between these two, but in the end I'll take LaMarr's smoldering eyes.  And I'm going to rethink the thing about dating my daughter... 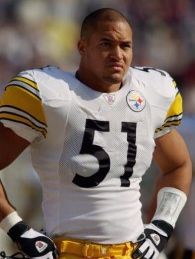 James Farrior has been variously called "Father Time," "Potsie," and "the unquestioned leader of our team" (Mike Tomlin.) At age 35 he is a joy to behold and an awesome football player. Desmond Bishop apparently likes to write poetry, and presumably also likes long walks on the beach.  All attractive qualities.  I'm going to call this one a draw as well.  This is tougher than I thought it would be!

This would have been simpler if we had kept Joe Burnett.  He is a fine looking young man.  But we didn't, and so my task was a bit more difficult.  Here were my choices: 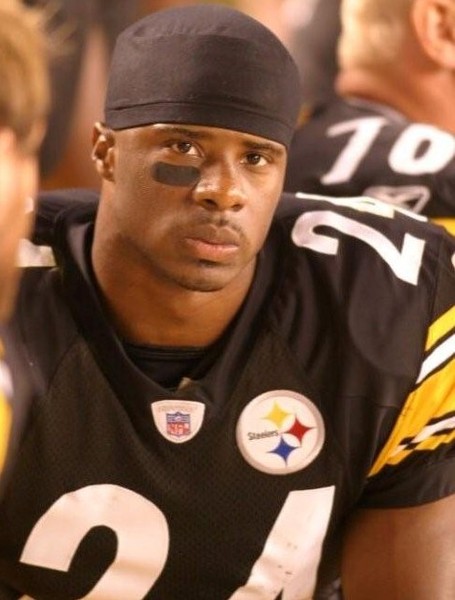 I definitely like Ike, especially the way he's been playing this year, but the whole swaggin' thing doesn't do it for me.  (Of course, Williams may do something even more annoying that I don't know about because I don't ordinarily see Packers games.)  So I'm going to say -

And now, the moment you have all been waiting for -

This may shock you, but here are my picks: 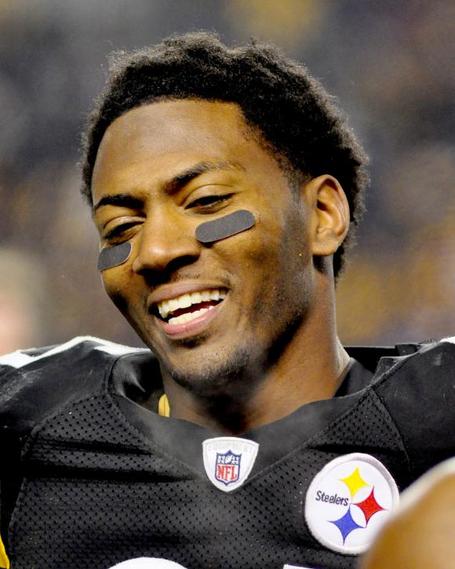 Ryan Clark generally plays second fiddle to his much more famous teammate, Troy Polamalu.  And naturally I think that Troy is one of the most gorgeous men to ever walk the face of the earth.  But like Clay Matthews he will appear in another capacity, and so I'm not forced to leave out the handsome Clark, seen in this photo celebrating his pick in the Ravens game.  I had the privilege of interviewing him a month ago or so, and I can tell you he's even better-looking in person.  With lesser competition Nick Collins would shine, but pitted against the Steelers corners he just doesn't make the grade.

I can't avoid the Hair Wars any longer.  So first we have the expected: 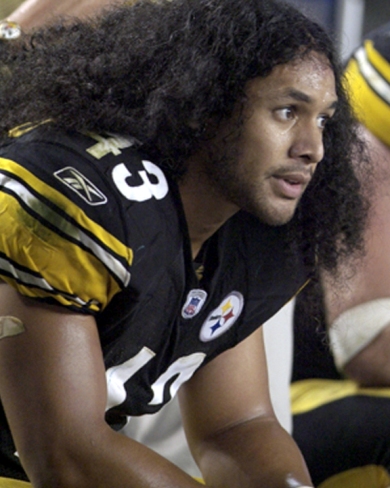 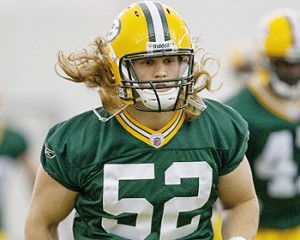 I did the best for Matthews that I could.  Trust me, it looks better under the helmet.  I notice that nobody is offering to insure his hair for a million dollars.

And finally, we cannot quit without discussing The Beard.  Although some of our guys have been growing playoff beards, they can't hold a candle to Brett Keisel.  But what about the Green Bay guys?  I looked to see what they had to offer in the way of facial hair.  I think you will be shocked at how one-sided this contest is.  In fact, to be fair, I've matched Keisel up with three guys from Green Bay: 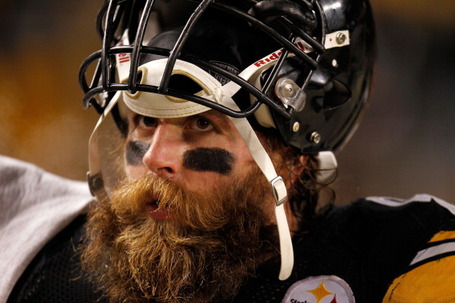 This beard needs a row of its own.  Here's the competition.  Prepare to be underwhelmed: 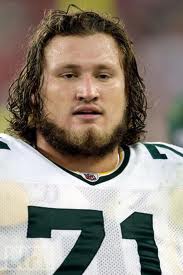 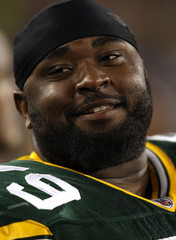 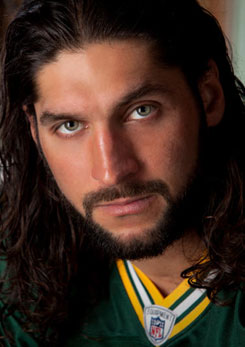 These three beards together can't begin to approach the awesomeness of The Beard.  And it isn't just luxuriant, either, it's practical.  It keeps you warm, and you can conceal snack food in it.  Like, say, an entire large pizza with all the trimmings.  Has anyone noticed how popular Brett is with the rest of the D-line lately?  Just an observation.

As for the Packers, I have to note that Mr. Chillar would definitely have made my Best-Looking list if he wasn't on IR now.  And that is the final nail in the Green Bay coffin - that to try and compete with The Beard I had to dig around in the inactive roster.  It's clearly no contest -