Play Of The Game: The Quarterback's Best Friend

Share All sharing options for: Play Of The Game: The Quarterback's Best Friend

Play action is the quarterback's best friend. When done properly, not only is there very little the defender can do, but he's liable to look like a moron in the process.

If a team is running often and successfully, a play-action pass is in the back of the minds of every linebacker and defensive back. Sometimes, though, even when you know it's there, you'll still fall for its seductive charm.

A big part of Pittsburgh's offensive success in their 38-17 win over Tennessee in Week 5 was due to their ability to run the ball and sell play-action fakes, especially at the goal line. Two of QB Ben Roethlisberger's franchise-high five touchdown passes were off play-action.

The first of two he would throw to WR Hines Ward was particularly sharp, and it's our Week 5 Play of the Game.

The Steelers have the ball first and goal from Tennessee's 7-yard line, looking at add to a 7-3 lead. This drive was extended by the perfectly executed fake punt, in which Dan Sepulveda made an argument of why Ward isn't the only non-quarterback quarterback on the team. Not really. It got the job done.

It was the eighth play of a drive that not only saw a fake punt go for big yards, but an end-around to Antonio Brown was a big gainer as well. Including those plays, it was a 4-pass, 3-run drive in which Tennessee looked confused with the variety the Steelers were throwing at them.

Pittsburgh lined up in a single back 3-WR set with Isaac Redman behind Ben Roethlisberger. Split to Roethlisberger's left was Emmanuel Sanders on the outside and Mike Wallace on the inside. Both are off the line, but Sanders would eventually motion to his right. TE Heath Miller is covering LT Jonathan Scott. Doug Legursky is at right guard, Maurkice Pouncey at center, Ramon Foster at left guard and Marcus Gilbert is at right tackle.

Ward is the lone receiver to Roethlisberger's right.

Seeing the Steelers come out in a single back look, the Titans replace strongside linebacker Will Witherspoon with CB Alterraun Verner, showing Pittsburgh their nickel defense. On the defensive line, right to left, is Dave Ball, Sean Smith, Karl Klug and Derrick Harvey.

Verner is on the defensive right side over Sanders, until he motions inside. CB Cortland Finnegan is over Wallace. Linebackers Barrett Ruud and Akeem Ayers are over center and on the weak side, respectively. Between Ayers and Finnegan, and standing on the goal line is SS Jordan Babineaux. CB Jason McCourty is shading to Ward's outside, seven yards off the ball. FS Michael Griffin is covering the slot, and expects a run.

Sanders motions to his right, resets, and at the snap, moves to block down on Ball. The six offensive linemen all assume zone-blocking stances, and push the Titans front four to the right side of the offensive formation. The Titans read run all the way, because the Steelers are pass blocking, and had run plenty often through the first quarter and a half of play.

From the back side, Finnegan is blitzing the strong side, leaving Verner to watch Wallace, who is clearing out to the left side. Roethlisberger sells a picture-perfect play fake, despite the fact the Titans have a pass defense package on the field.

Ayers reads run right at the play fake, and crashes down on Gilbert as Ward releases into the end zone. Ruud and Griffin both are clearly fooled by the fake (they are both clearly off-balance when they try to reverse their field, note the circles). By the time they stop advancing forward, Ward is past them, to the inside of McCourty, leaving the defender with zero chance to make a play.  A simple pitch and catch for Ward and Roethlisberger. 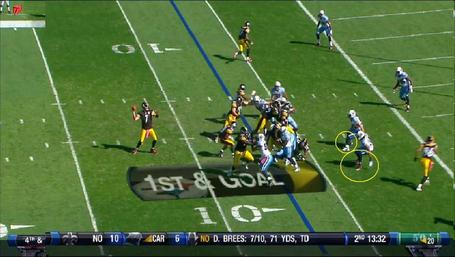 Griffin and Ruud both bit badly on the fake, and McCourty was only assigned to cover the corner of the end zone. The throw came right between McCourty and Babineaux, neither had a chance to make up for the absences of Ruud and Griffin.

The best part of this play is the fact the offensive line so badly whipped their assignments, they probably could have run the ball and scored as well. There's only one Titans player on Pittsburgh's side of the line of scrimmage, and he's seven yards away from Roethlisberger.

A great result on a well-run play, leaving Babineaux looking at McCourty, and McCourty at Griffin, and Griffin at the ground. 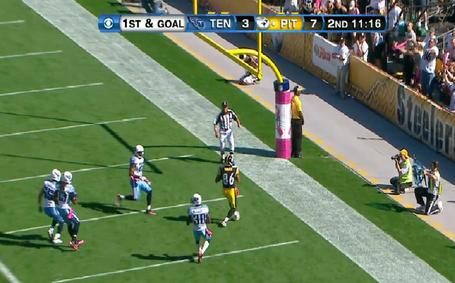