Well I finally got my act together, as you may guess from my other posts I am pretty detail oriented and a perfection analist {oops analyst} :) I can't stand when my data is off or when my tables look less than professional so I just had to get my tables right. I think that part is done and after finally completing this drawn-out task, I realized this Salary Cap Data is telling me a story I just had to share with Steeler Nation. Kevin Colbert and Omar Khan have painted an absolutely stunning portrait hidden in plain sight and if you follow the numbers you will see this truly is a Pollock-van Gogh-Picasso masterpiece. You can question the player personnel decisions or the team’s age BUT you can never say that they have managed the Salary Cap poorly. All teams that spent heavily in 2009 and  2010 had Salary Cap issues this year and there was nothing to do but make the best out of a bad situation. Make Lemonade from Lemons so to speak. It wasn't until the new CBA threw a monkey wrench in works that the Clubs with Salary Cap challenges began to realize that going from a projected $140mm Cap to an actual $120.4mm Cap would be no "walk in the park."  Please take a closer look at the Cowboys Dead Money table and you are reminded of the timely and relevant Warren Buffet quote:

When you compare this table to the Steelers it is night and day, we only had $5.2mm total Dead money on the books vs. the Cowboys $31.2mm. It's quite ironic if you think about it, Jerry Jones is a high-risk, high reward type guy, he made his fortune in the oil exploration (i.e. drilling) business and as you probably know that is a boom-bust type industry, especially for oil drillers.  Like being a wildcatter, going after big-time-high-priced FAs can be a huge win because not only might it help win a Lombardi but it puts asses in the seats! But just like a wildcatter drilling a dry well you can roll snake eyes 7X in a row and go straight to Salary Cap Jail!.

In the past, Jerry had good success with his high-risk style, remember Prime and the other star-studded Cowboy lineups chock full of "SB" Money? Think Aikman, Irvin and Emmitt.  It worked wonders for a while until the Grim Cap Reaper paid a visit and forcefully threw Jerry into Salary Cap Jail. Funny how history repeats itself, right now Jerry is looking at an unbelievably bad Cap scenario, possibly even worse than the post-Aikman years. NOT only is there more Dead money than I have listed here but Jerry will certainly add to the $20.8mm listed here when he trims his 2012 Roster. Jerry is very likely to go over $30mm in Dead $ for 2012 which is about 25% of the total Cap. NOT GOOD!  Please remember the Cowboys when you feel tempted to spout off on why we must get the next Nnamdi Asomugha or Megatron. This is the main reason why the Steelers do not chase big-time FAs or hand out massive Signing Bonuses ("SB").  Very prudent!

And what is the solution to this problem? Often gamblers like Jerry feel they must hand out more huge "SB"s because it's the only way to stay under the Cap and attract new stars while keeping the ones you have. Doesn't this sound a lot like throwing gas on a fire?  Or going all-in on a busted straight you will lose your whole bankroll, it's just a matter of time! When the day of reckoning finally does come, the situation will be that much worse. Peruse the table below [ click on it to increase image size ] or [ Link to PDF Format ] and you can clearly see what I am talking about. 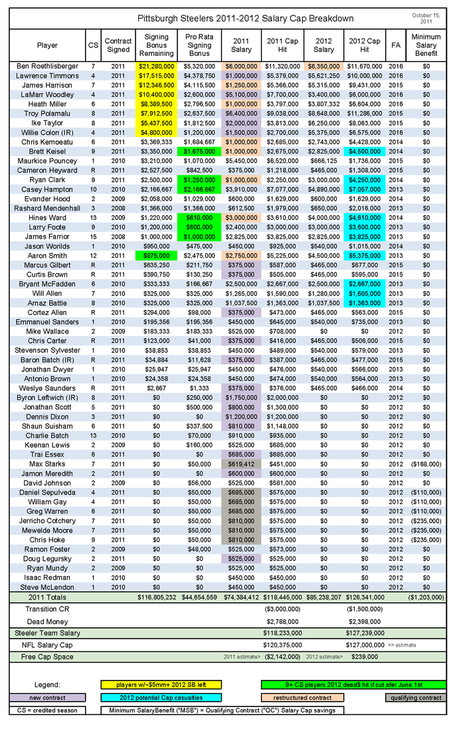 I recently wrote the Max Starks Contract Story [ Link to Max Starks Contract Story ] and how we signed him with only $750k Cap Space and at that time I was certain he could not be fit into a Qualifying Contract ("QC").  However, after re-reading the current CBA clause about 10 times I am still uncertain but believe there is an exception for players returning to their Old Club after being cut. Provided the contract was not re-negotiated or entered into in the year prior to the year the player was cut AND there were no terms (Minimum Vet Salary or more than $50k "AC") then the cut player may return to his old team under a "QC." (it's even more complicated because it depends upon the cut date but for Max the prior year would be 2010).

All "QC"s are only available to be signed for one year and cannot be renegotiated prior to the end of the season without losing the Salary Cap savings. Therefore, you cannot re-sign Max to a longer contract until after the season if you want to keep the Salary Cap savings of $168k on the books. Someone asked me about re-signing Max Starks now and I saw no problem with it, now based on the fact that a "QC" exists it is clear that we will not re-sign him (even if we actually wanted to) and lose that Cap savings even though it is only $168k. Also, from the table you can see that we have about $1.2mm in Salary Cap savings in 2011 by using "QC"s. While this is not a big number compared to the $120.4mm Cap it is a huge help when you are Salary Cap challenged like we are.

Now during the Max Starks homecoming rumors, Mike Florio of Pro Football Talk tweeted that Steelers had about $750k of Cap Space. Also, Steeler Depot later reported that $875k Cap Space was freed by extending Aaron Smith's Contract one year and $1.75mm of his current Salary was converted to "SB." This maneuver freed up $875k this year but also created potential Dead $ of $875k next year if this is his last year. And if all this information is correct and Max did sign a "QC" then after cutting Chris Scott an additional $1.4mm in Cap Space has been freed up and you can see below the new total is roughly $2.142mm.

This is very important as Tuesday's trading deadline approaches and that may be the reason the Aaron Smith restructuring occurred. After Sunday's games there are only 11 regular season weeks remaining so $2.14mm Cap Space would allow you to sign contracts with Base Salaries up to $3.31mm if there were no signing bonuses or other "AC."

The devil is in the details and you can see how inter-related a thing like Max Starks signing a "QC" truly is because it rules out certain moves while opening the door to others. In fact, we are now positioned to make a trade if we can find more O-Line help. There is quite a lot of flexibility if you think about it, you could bring in a 10 "CS" Vet, give him a 2 year contract for the $910k Vet minimum and a $3mm signing bonus and still be exactly $53k under the Cap. So you see, the details while boring are also very important.

I sorted the above table by Signing Bonus Remaining ("SBR") and highlighted yellow the largest amounts. Of these amounts, there are only three contracts, Ben, Deebo & Heath that are not newly signed contracts in 2011. Ben is expected to have large "SBR" and other Guaranteed Amounts ("GA") owed to him because if you don't pay him someone else will.

Now take a look at the neon green highlights which are the 9 year Vets with "SBR."  Again see how well planned out this process is; the biggest potential Dead Money hit is $3.35mm form Brett Keisel if he is cut before June 1st, 2012 after June 1st the 2012 Cap Hit is only $1.675mm while the same amount gets pushed to 2013. So assuming Steelers make cuts after June 1st of 2012 which is standard NFL practice to avoid "Acceleration." Acceleration is the Cap accounting rule that calls for all "SB" and "GA" to be charged to the Cap immediately should a player leave your Roster prior to June 1st of any given league year. However, if you cut the player after June 1st then the Current Cap hit would be the "expected" pro-rata amount while the remaining "SBR" and "GA" amounts are pushed into the following year. This means that Casey Hampton with $2.17mm "SBR" would be the largest potential Dead Money Hit if he were cut after June 1st. Again this is peanuts compared to the Cowboys.

Because of the judicious use of "SB" Kevin Colbert and Omar Khan have positioned this team to get younger with no major landmines lurking below the surface. Even if they cut 10 of the top 20 players it would be extremely hard to get to the $20.8mm+ Dead Money hit Dallas faces next year.

Finally take a look at the turquoise blue highlighted numbers and you can determine for yourself who might be the best Cap casualties. There are any number of candidates and it will depend upon how they do this year but because the FO has planned this so well they are prepared for almost anything, including a Deebo injury-retirement. It wouldn't be pretty BUT it would be manageable, from every angle your FO has spread and hedged their bets in a judicious manner so that almost any scenario would be covered. That's a foundation of good management, diversifying your risk enough to protect from unexpected events without over-diversifying and becoming average. Bottom line, these guys are world-class Maestros like Leonard Bernstein, Arturo Toscanini and the present day Gustavo Dudamel. What beautiful music, if you listen closely these numbers are a symphony too.

The Steelers got off to a slow start this year with difficulty on the road while being magnificent at home. We probably should be 0-3 on the road because of our Turnover Troubles [ Link to Road Turnovers are Nuclear Tsunamis ] but we were able to squeak by with a 1-2 road record. When I look at the table below I see a strong relationship between our away winning % and our playoff performances. It will be interesting to see if this past correlation  holds up later this year and through the playoffs. Every year that our away winning % has been 75% or better we were in the AFC Championship Game or went to the Super Bowl. That's how critical the road is because it is one of the best indicators how good a team truly is. Anyone can win at home.

If the Steelers can peak come playoff time there should be no reason they cannot make a Super Bowl run because the only team that looks really good are the Packers. Everyone, including the Steelers have their shortcomings and foibles and many teams also have had a terrible time on the road. Either way, Kevin and Omar have put this team in a position to win this year without mortgaging the future while maintaining flexibility to injuries, retirement and age. Bravo Maestros!

I know after looking at the big picture and seeing the complete picture it paints I am more than impressed. And if we can avoid road turnovers and peak at the right time who knows what is possible. At Heinz field the sane Dr. Jekyll reins but on the road that psychopath Mr. Hyde keeps showing up. Bottom line, whatever the results, Kevin Colbert and Omar Khan could not have done any better job under the circumstances, they truly are the Wizards of Chuck Noll Way!

Any cap questions or trade ideas?