The Steelers defensive scheme is based on disguising the intentions of each defender. There is a lot of movement from the front seven as well as the secondary, and a quarterback - rookies in particular - can get confused easily.

The plan is to create pressure through misdirection, but in some cases, the intention of the play fails. When that happens, it comes down to 1-on-1 match-ups.

In those cases, the Steelers couldn't be more happy to have DE Brett Keisel on their side. His return after a knee injury sidelined him earlier this year has definitely ratcheted up the amount of pressure they're bringing, and when a CB blitz fails, they can count on Steeler Moses to whip his assignment.

The Steelers forced an incompletion on first down and gave up four yards on the ground to RB Maurice Jones-Drew. Pittsburgh leads visiting Jacksonville 7-0 with 3:25 to play in the first quarter. The Jaguars balanced their offense nicely in their first possession, getting 38 yards on their first seven plays before allowing a sack by LaMarr Woodley to stall their opening drive.

The Steelers defense allowed three first downs on that opening drive, but forced Jacksonville to throw on an aggressive Steelers blitzing down on the Jaguars' second drive.

These kinds of situations are exactly what Pittsburgh wanted to force, and their ability to do that continuously over the years is why defensive coordinator Dick Lebeau is 12-1 against rookie quarterbacks in his time in Pittsburgh.

ILB James Farrior and SS Troy Polamalu are on the strong side (offensive right), playing a step behind Hood and Woodley, and in the spaces between them. CBs Ike Taylor and William Gay are showing coverage of the two receivers on the strong side, Taylor on the outside and Gay in the slot.

CB Keenan Lewis is in press coverage on the receiver on the offensive left side, with FS Ryan Clark behind him, seven yards from the ball.

To Gabbert's credit, he wisely fires a warning snap from the shotgun by reaching toward the center, forcing Lewis's blitzing hand (in yellow) from Gabbert's left. Everyone sees Lewis is coming, showing Gabbert he's going to have Hill one-on-one with Clark on the left side. The line changes its blocking assignment, recognizing while the Steelers are showing blitz on the strong side (Polamalu is at the line right before the snap), the pressure is coming from the back side. 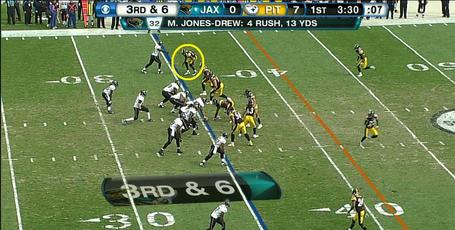 With Lewis blitzing from the corner, Clark comes up to to cover Hill, with Farrior covering Marcedes Lewis. Polamalu shows a pass rush stance, but peels off and pick up Thomas from the slot, and Taylor will stay with Dillard.

By blitzing from the weak side, Lebeau's intention is to get the rookie to throw away from the defense, which is right where Polamalu is lurking. Gabbert's hot reads are Hill, who smartly runs a simple out-route right at the first down marker, and Lewis, who could catch a quick pass, and muscle his way forward.

Neither option works, but not because of the Steelers original intention.

Much of the play was designed to force Jaguars LG Will Rackley to a decision. Had Lewis not showed blitz so early, Rackley would have blocked down on Keisel, which would have put Timmons and Lewis on LT Cameron Bradfield.

After the snap, Lewis rushes forward, and delays, allowing Timmons to stunt to the outside, with the hope of drawing both the guard and the tackle to him. This would have given the athletic Lewis an inside lane to land square in Gabbert's face, obstructing his view of the field and getting in a position to deflect a pass or put a hit on Gabbert.

You may recognize this blitz from last year's AFC Championship game, but with James Harrison and Taylor instead of Timmons and Lewis. Taylor didn't show the blitz, and had a free shot at Jets QB Mark Sanchez forcing a fumble that CB William Gay returned for a touchdown.

It appears Gabbert called a shorter drop, but Rackley went back too far, thus not giving Gabbert room to operate (in red). 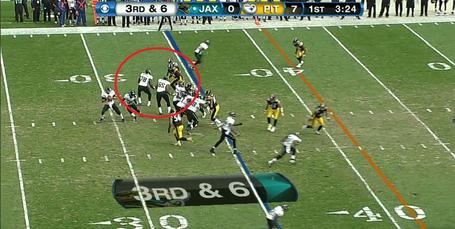 Even with that, Rackley and Bradfield do enough for Gabbert to release a quick pass. But Keisel, who slammed down on C Brad Meester, dominated his assignment, pushing Meester and RG Uche Nwaneri well into the backfield (in yellow). Woodley is unblocked at the line, and prepares to take on RB Greg Jones straight up.

The Steelers are able to get good pressure despite Lewis's presnap gaffe, forcing Gabbert to try to release quickly. He had a chance to make a big play, too. Hill burns Clark on the out route (in red), and he would have had a completion and a first down (probably a lot more than that, considering there is no help on Clark's side) had Keisel not completely whipped Meester and Newaneri. If Keisel is stopped at the point of attack, Gabbert has plenty of room to step up and either run, or hit Hill coming out of his break.

Marcedes Lewis is late getting out of his break and Farrior is right on him. Gabbert no longer has the ability to get Hill the ball despite being open. Gabbert can't escape Keisel, and has nowhere to go but down.

And all we're left with is an arrow fired by Steeler Moses. 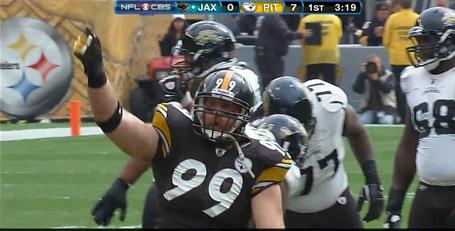 Keisel dominated this game, and there are four or five plays worthy of this space from him alone. This one highlights Keisel's value, and how the Steelers defense is good enough to win the play despite it not being exactly what they had planned.