Steelers vs. Cardinals: Five Players to Watch in Pittsburgh's Game Against Arizona

Share All sharing options for: Steelers vs. Cardinals: Five Players to Watch in Pittsburgh's Game Against Arizona

Another week, another 1-4 team. After barely holding on for a win against the Jaguars, the Steelers are taking a cross-country trip to take on the Arizona Cardinals in the desert. The victory against Jacksonville was too close for many a Steeler fan's comfort, and injuries continue to throw wrenches into the effort of building consistency along the offensive line and other positions .

You might think that playing another disappointing team in the early season will be just the right recipe to get some momentum before tougher games in the upcoming weeks, but the Cardinals are not to be underestimated. After all, they are not called 'Steelers West' around these parts for nothing - former Pittsburgh coaches and players are licking their chops to get another shot at their former team.

Sunday's game will come with lots of memories for Steelers fans as we will see two former Steelers edge rushers in Clark Haggans and Joey Porter along with Nick Eason backing up the defensive line. Of course, the Cardinals also sport two former Steelers head coaching candidates in head coach Ken Whisenhunt and assistant head coach Russ Grimm, who in 2007 both got beaten out for the spot by Mike Tomlin. And who could forget Super Bowl XLIII, in which the Steelers edged out a win against Arizona behind big plays by Ben Roethlisberger, James Harrison, and Santonio Holmes? No doubt, the Cardinals will be motivated.

But so will the Steelers. The game against Arizona marks the end of a relatively easy stretch of Pittsburgh's schedule, after which they play host to the Patriots and Ravens in consecutive weeks. The Steelers will not want to miss out on a chance to go into these games on a three-game winning streak, but in order to do so they have to take care of the Cardinals first. These Five Players to Watch will have to play a crucial part in helping Pittsburgh improve to 5-2 in the desert. 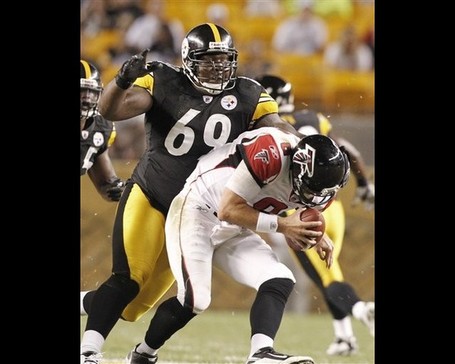 And the nose tackle carousel continues. Casey Hampton is already ruled out and if Chris Hoke, questionable with a stinger, misses Sunday's game, the Steelers' third string nose tackle will start against the Cardinals. I am talking of course about Steve McLendon, the young defensive lineman who has flashed potential in limited duty but has not seen the field much during his two years with the Steelers. He seems to be a good pass rusher from the nose tackle position, but has shown difficulty plugging the gaps and stopping the run.

If you are an avid Steelers fan, you see the problem here. In Dick LeBeau's 3-4 defensive scheme, the nose tackle's primary responsibility is stopping the run while freeing up others to rush the passer. So it makes sense that when McLendon came into the game against Jacksonville for the injured Hoke, the run defense seemed to worsen while giving up longer runs to Maurice Jones-Drew. Now the Steelers travel to Arizona, meeting up with running back Beanie Wells who is finally proving to be worthy of his first round selection in 2009. Only having played in four games so far, Wells is averaging 95 yards per game (4th in the NFL) at 4.8 yards per carry and has already scored 6 touchdowns (tied for second among running backs). While the Cardinals offensive line has struggled in pass protection, they have opened holes for Wells that McLendon needs to have a part in stuffing. If he indeed gets the start against Arizona, the young nose tackle will get the chance to prove his doubters wrong and show that he can be a true Steeler defensive lineman by holding up strong against Wells and the Cardinals running game. 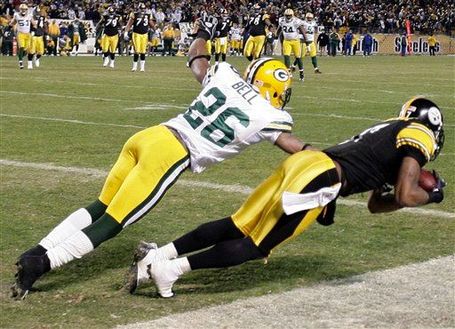 Mike Wallace is the talk of the NFL. In recent weeks he has been recognized by multiple experts as the league's best deep threat, and was even called the NFL's Best Receiver ahead of Calvin Johnson by ESPN's KC Joyner. High prayers for a player who has not yet made a pro bowl and before this season was doubted by some as a true #1 receiver. But his season to date has proven the doubters wrong, as Wallace has been equally lethal in the short, intermediate, and long passing game and has become a legitimate threat for any secondary he faces.

Against Arizona, Wallace will face highly touted rookie cornerback Patrick Peterson, which should make for an exciting match up all afternoon. Peterson has struggled in coverage so far, but sports supreme athletic tools that just might match up with Wallace's otherworldly speed and quickness. Of course, the young receiver might just be motivated enough by Peterson's athleticism to blow past Peterson and whoever tries to cover him. After recording six straight 100 yard receiving games dating to last season, Wallace has not eclipsed that mark in the last three games. Against a passing defense ranked 20th in the league that has given up big games to the likes of Steve Smith, Hakeem Nicks, and Sidney Rice this season, Wallace looks to have a good probability of reaching the century mark yet again. He is currently bothered by a minor hamstring issue, but is probable for Sunday's game and shouldn't be limited. The Steelers could sure use his speed and play-making abilities. 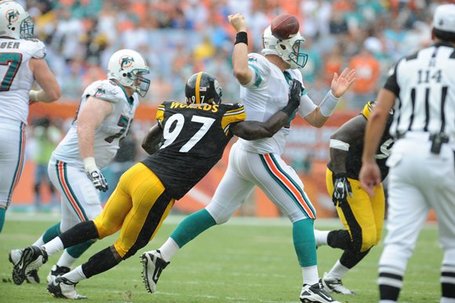 I know, Mike Tomlin has not committed to starting second year linebacker Jason Worilds on Sunday at outside linebacker yet. I have a funny hunch that exactly that will happen though. Make-shift solution Lawrence Timmons has struggled at the position, and is much better suited at inside linebacker where Larry Foote could take his role as Farriors backup again. On the other hand, Worilds has successfully recovered from the quadriceps injury that sidelined him in the last couple of games, and could get his chance to get his feet wet against a struggling Cardinals offensive line.

Did I say struggling? If you look at the Cardinal' starting tackles, struggling might actually be too nice. In five games, right tackle Brandon Keith has given up 5 sacks, 2 quarterback hits, and 12 hurries. But the left side is even worse, with left tackle Levi Brown allowing 6 sacks, 3 quarterback hurries, and an astounding 23 quarterback hits in just five games. What better occasion than to let the 2010 second round pick Jason Worilds loose, show off his pass rushing skills, and get some confidence for the rest of the season? Getting consistent pressure is not just important to improve Worilds' psyche. Kevin Kolb has received some criticism in Arizona, but has actually shown to be a competent quarterback when given time. His wide receiver corps is talented, and his running backs and tight end are all adept at catching short outlet passes. If the Steelers want to come away with a win, restricting Kolb's time in the pocket is absolutely necessary. With Timmons having shown that three years of not playing the position doesn't improve your edge-rushing skills, it will be Worilds' turn to prove what he can do to help the Steelers get the win. 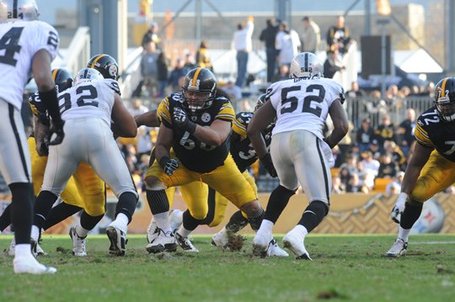 It seems like a Steelers offensive lineman appears in this post every week, and every time it's because of injuries. This time, backup center turned right guard turned left guard Doug Legursky will sit out the game with a dislocated toe, allowing Chris Kemoeatu to get back into the fold after sitting out two games with a knee injury. In his absence, Legursky was a major part in getting the running game back on track by helping both Jonathan Dwyer and Rashard Mendenhall eclipse the 100 yard mark in consecutive weeks. Now, it will be Kemo's turn to show why he is known as a 'mauler' in the run game.

But it might be Kemoeatu's pass blocking 'skills' that will prove the difference between an exhilarating and a disappointing Sunday afternoon. For the majority of the game, he will be lined up against Cardinals defensive end Darnell Dockett, who has victimized the Steelers in the past. When he first played against Pittsburgh in 2007, Dockett recorded 2.5 sacks and forced a fumble by Roethlisberger en route to helping his team win 21-14. A statistical outlier? Not according to his second career game against the Steelers, when he tied Reggie White for a super bowl record in February 2008 by sacking Ben Roethlisberger three times. 5 1/2 sacks in two games? Not too shabby. With old Steelers friend Joey Porter likely occupying left tackle Max Starks for the majority of the night, it will be Kemoeatu's job to make sure that three times is not a charm for Dockett. If Kemo can hold his own one on one, Roethlisberger might have a surprisingly comfortable day in the pocket. If not, we could be continuously seeing an all-too-familiar picture of Ben on his back more than we would like. 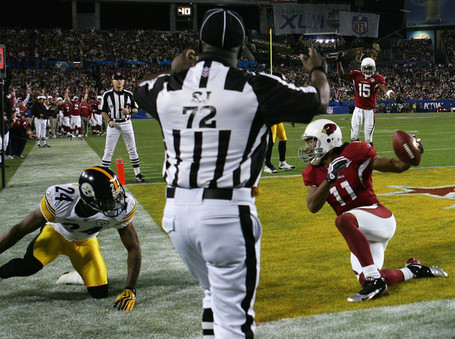 On a defense that has struggled to maintain its almost habitual dominance this season, few players have stood out even more than before. Arguably heading that short list is Ike Taylor, the cornerback who Steelers fans think has been robbed of pro-bowls in recent years. This time around though, the voters might not have much of a choice. In six games this season, Taylor has given up only one touchdown reception, which came last week against Jaguars receiver Jason Hill. The TD catch was one of only two receptions Taylor allowed all day. He has become a true shut-down corner in this league, consistently  lining up in man coverage against the opposing team's best receiver.

If the same is true against the Cardinals, Taylor will have his hands full. He will likely be asked to shadow Larry Fitzgerald, one of the elite wide receivers in the game who even with a new quarterback is on pace for over 1,300 receiving yards at 15.8 yards per catch. Fitzgerald isn't exceptionally fast, but has an uncanny ability to locate and come down with the ball in unlikely situations. The two last met in Super Bowl XLIII, when Fitzgerald burned by Taylor for 115 yards and two touchdowns in the fourth quarter alone. The duel was fun to watch for any neutral observer then, and will be just as crucial now. Stopping the former Pitt Panther wide receiver is the single most important task for the Steelers if they want to avoid a shootout with the Cardinals. Fitzgerald is too good to be completely shut out, but Taylor needs to limit Fitz from having a big impact throughout Sunday's game. If he continue his early season form, the Steelers are likely coming home with a victory.

As always, other players are worth looking for as well. The duel between Max Starks and Joey Porter will be fun to watch, if only for nostalgic purposes. Cornerbacks Keenan Lewis and William Gay will have their hands full with emerging wide receiver Early Doucet, who was targeted 16 times in the Cardinals' last game against Minnesota. If LaMarr Woodley continues his recent upswing, he might get multiple sacks in Arizona. Finally, Ziggy Hood had a great game against the Jaguars and actually leads the Steelers in QB hurries, constantly disrupting the opponent's backfield since getting the starting nod. Who are your Five Players to Watch this week?