Play Of The Game: Steelers Receivers Get Fast and Physical

Share All sharing options for: Play Of The Game: Steelers Receivers Get Fast and Physical

The question wasn't "if" Heath Miller would appear in Play of the Game, it was "which one?"

Miller had a fine all-around performance in Pittsburgh's 34-20 win over Arizona in Week 7. He caught four passes for 59 yards and a touchdown, and blocked at a high level.

While his touchdown reception was an excellent play (highlighted by WR Hines Ward's chip of LB Clark Haggans, which gave Miller a free release), it wasn't as impressive as the three lockdown blocks Miller, Ward and WR Emmanuel Sanders put on their targets, allowing WR Antonio Brown to gain 16 yards on a 2nd-and-15 bubble screen.

The Steelers have the ball at Arizona's 36 yard line, two plays after FS Ryan Clark incercepted a batted Kevin Kolb pass. RB Rashard Mendenhall was swamped when he received the handoff on first down, and the Steelers faced a gloomy 2nd-and-15, just outside the red zone.

After rushing for over 170 yards the previous two games, it was frustrating to see the first run of the game end so badly, especially since the risk of coming out of a rare Steelers interception with nothing but a long field goal attempt (with the league's most shaky kicker) to show for it.

The Steelers are in a five receiver, trips left set, with Mike Wallace wide to the offensive right, on the line. Brown is slot right, and will motion over to the left side of the formation. Miller is slot left, off the line, Emmanuel Sanders is wide left, off the line, and Ward is on the line between Miller and Sanders.

Ben Roethlisberger is in shotgun with no running back.

Arizona is in a dime defense, employing six defensive backs, with three linebackers and two down linemen. CB Patrick Peterson will have Wallace in man coverage after LB Daryl Washington moves up to the line, next to LB Clark Haggans, both are standing up, looking to overload the offensive right side of the formation.

DT Darnell Dockett is lined head-up over C Maurkice Pouncey, and Calais Campbell, the other down linemen, is on LT Max Starks' outside shoulder.

Before the snap, Brown (yellow) motions to the right side of the formation. In seeing this, Wilson (red) checks the defense into a Cover 2 look, expecting a deep pass (many of the Steelers deep passes come off of receiver motion). Washington oversells the blitz, giving the Steelers offensive line time to adjust to the overload that's coming over the right tackle. Peterson moves into press coverage with Wallace.

The blitz is a gamble for the Cardinals, and they are betting on Washington hitting home before Roethlisberger can hit the deep pass they're expecting on 2nd-and-long.

It's the exact gamble the Steelers were hoping for, and they had the perfect play called for it.

Brown drops behind Miller, Ward and Sanders, who immediately assume run blocking stances. Roethlisberger receives the snap, and simply flicks it over to Brown, who has plenty of time to squre his shoulders to the line, and run through the gaping seam his three blockers have created for him (yellow).

Lenon dropped into coverage, only to get stood up by Miller. Ward locked on Adams, and Sanders stopped Jefferson just long enough for Brown to sprint between all of them. 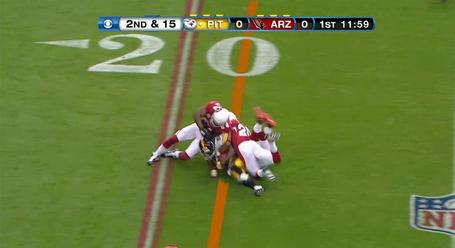 Marshall hustles from his safety position after defending any double move or post pattern from Wallace. The Steelers big-play threat sold a nice decoy route aimed to freeze Marshall, which it did, leaving him too far away to make a play on the ball any less than 15 yards down field. Jefferson eventually breaks free of Sanders, and gets down field to assist Wilson and Marshall (on the bottom of the pile) on the stop.

The Steelers coverted a 2nd-and-16, their longest one-play conversion this year. That drive ended up giving them a momentum-seizing touchdown (Roethlisberger to Miller), and took a hostile home crowd out of the game. People have come to expect that kind of down field blocking from Ward, and Miller is one of the best blocking tight ends in the NFL. Sanders is taking notice, and Steelers offensive coordinator Bruce Arians is showing his confidence in Sanders' blocking ability.

Brown's quickness and straight-line speed speak for themselves.

The Steelers ran a similar bubble screen to the left side in the third quarter, this time, with Miller motioning out of the backfield to the slot, next to Ward. The pass again went to Brown, and it again yielded a first down on a second-down play.