Share All sharing options for: Why I Love Pittsburgh Steelers H-Back Isaac Redman

The last few weeks there has been a lot of talk about Rashard Mendenhall vs. Isaac Redman.  I have been very vocal about my love for Redman, but I do give credit to Mendenhall where credit is due.  I thought about making this a post about that battle, but I am not going to.  I just am writing this to show you one of the reasons I love Redman and why you should too.

Sir Redman is not a back with burner speed and he is not an athletic freak.  He is just tenacious and has a very high motor.  I would also say he has some power to his style, but some people would probably disagree with that.  Anyway, Redman's ability to flex his intangibles took him from a Undrafted Free Agent to the secondary back on the world class Steelers football team.  Willie Parker did the same thing, but it was FWP's blazing speed and Bettis injury that brought him into the limelight.  I would argue that Redman had to fight a lot harder to get his spot.

One of my favorite plays of the game came early in the 2nd quarter with just under 14 minutes to go.  The Steelers were facing a 2nd and 6 deep in their own territory.  In the grand scheme of the game, the play ended up being inconsequential, but it was a very intuitive play by Redman.  Lets take a look at the offensive and defensive alignments. 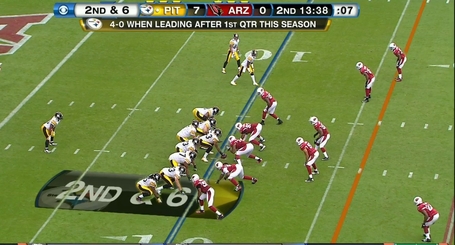 The Steelers are setup in an alignment that they usually run out of.  There are two TEs in on the line with Heath Miller and David Johnson on the strong side.  There are two WRs, Mike Wallace on the line and Hines Ward just off his back left hip off the line.  Isaac Redman is alone in the backfield about 7 yards deep.  It looks like it will be a run and the Cardinals MLBs are close to the line as a result.  We can see two cornerbacks playing off both receivers and a safety within 10 yards of the line.  The other safety is probably 10-15 yards deep over top Ward and Wallace. 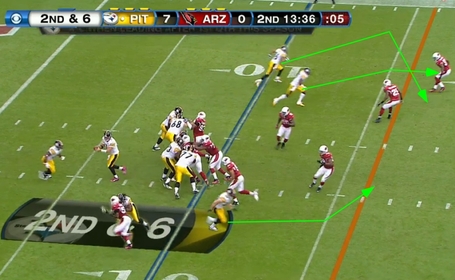 The play is set up as a play action, but Ben does a pretty bad job of selling it.  Note that the routes are not drawn to scale and they are mostly presumed.  You can kind of see what they run, but once they get past the screen I cannot tell.  Wallace runs a deep route and the play is probably set up for him.  Ward runs a fake out and cuts behind Wallace through the flames he leaves (like Back to the Future) and ends up about 15 yards down field.  Heath Miller does not block anyone and takes a slant about 7-10 yards down field.  Notice the one MLB has a clear lane to Ben right now. 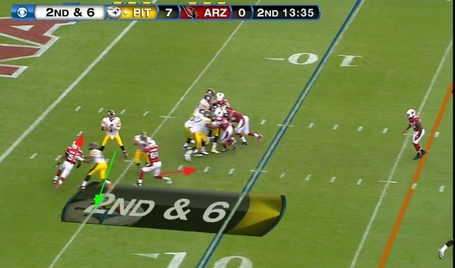 I assume the safety does not bite and with Johnson not being able to hold his guy anymore the play has officially become broken.  Notice that Redman has stoned the MLB blitz so well that he decided to attempt to go right to get away from him.  Ben, the scramble machine, sees what is happening and brilliantly steps through the two blocks all the while keeping his eyes mostly down field.  The MLB who cuts back to the middle is taken out of the play once a Cardinal from the pile gets away from Marcus Gilbert. 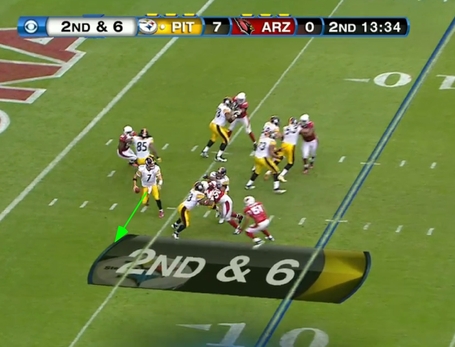 Do not worry, Marcus, Redman has your back.  Redman helps Gilbert who has lost his block by this point. It is a good 4-5 seconds after the snap, so do not blame Gilbert.  Redman gives enough of a chip to help Gilbert and give Ben an extra second of time.  He essentially prevented two sacks on one play.  However, it's what he does next that I love. 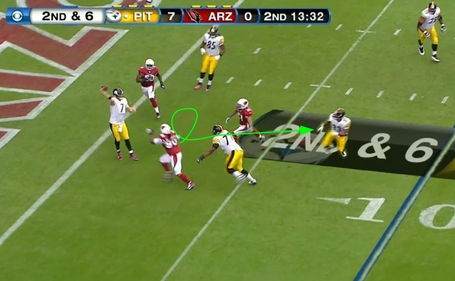 Redman sees an open space and spins off of Gilbert's block.  He throws his hand in the air and Ben sees he is wide open and dumps it off to him.  The play is not a 50+ yard gain to Wallace, but it gets 10 yards and a fresh set of downs.  The entire play was made by Ben's ability to keep plays alive, but more importantly Redman's blocking to give him the chance to do that.