Play of the Game: What Happens When A Great Cutback Runner Cannot Cut Back

Share All sharing options for: Play of the Game: What Happens When A Great Cutback Runner Cannot Cut Back

There's plenty of blame to go around in wake of Pittsburgh's 17-10 loss at Houston in Week 4. It wasn't all bad, though, considering some of the obstacles the Steelers inherently faced. A rough crowd, the injury bug, a cyborg called Mario Williams. All of these things can be difficult to overcome.

The Steelers defense received much of the criticism after allowing 155 yards rushing to Arian Foster, a quality running back playing in a scheme that fits his talents like a glove. However, upon further review, it could have been much worse.

One play in particular, Foster was stuffed by the excellent overall effort from the front seven, two players in particular.

Houston had the ball 2nd-and-7 from their 18 yard line with 14:57 left in the fourth quarter. After a blistering start, the Steelers had pretty locked Foster and the high-powered Texans running game down. Much of the reason why the Steelers were able to knot it up at 10 after such a dismal start was the three-and-out the Steelers forced in Houston's only possession of the third quarter.

After jumping out to such an impressive start, the Texans lost momentum, and really needed to make it up on this drive. They were going to their bread-and-butter, Foster on stretch runs to the offensive right side. 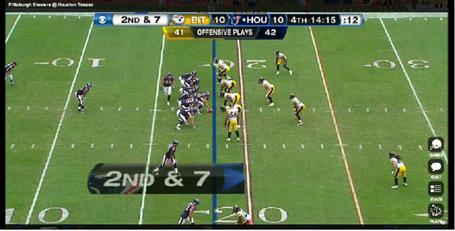 Pittsburgh faced the second and long with their base defense. RE Ziggy Hood, NT Casey Hampton and LE Aaron Smith were down, and ROLB James Harrison and LOLB LaMarr Woodley were standing up on the outside shoulders of the tackles. ILB James Farrior is three yards off the line of scrimmage to the offense's left side. ILB Lawrence Timmons is five yards off the ball, lined up over the center. CB Ike Taylor was on the right side of the formation, pinched in. SS Troy Polamalu was nine yards off the line, covering the slot. CB William Gay is in press coverage on the outside receiver. FS Ryan Clark is over the top, 15 yards off the line

QB Matt Schaub is under center, with WR Kevin Walter split wide to his right, on the line. WR Jacoby Jones is in the slot, off to the right of center.

The Texans are in a double-TE formation, and before the snap, TE Joel Dressen motions to the right, loading the strong side with three potential receivers. TE Owen Daniels is down at the end of the left side of the formation.

At the snap, Schaub gives to Foster who's aiming for the six-hole, or, the gap between Smith and Woodley. This path had been clear for the Texans earlier in the game, and Smith and Woodley both recognized it immediately. 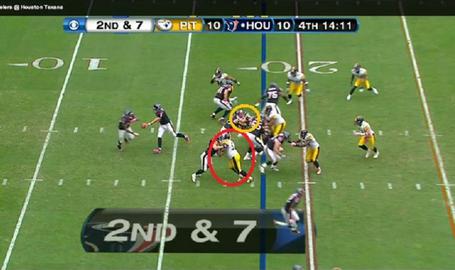 Woodley (red) does an outstanding job of stoning Dressen and holding the point of attack. Houston chose to block him with just Dressen, but with Woodley having pushed Dressen backward, sealing off the edge, he's in position to stop Foster for a minimal gain.

The key, though, is Smith (in orange). Like Woodley, he gets excellent penetration on C Chris Meyers, driving him backward, keeping his leverage low. This is important for two reasons. One, Foster has to make a cut much earlier in his run than he wants. He just got the ball, so he doesn't have much forward momentum. Making a cut forces you to stop and start again. Not something you want to do when you're seven yards in the backfield. Foster is perhaps the game's best cut-back runner, and he showed that in Week 4.

Just not on this play. 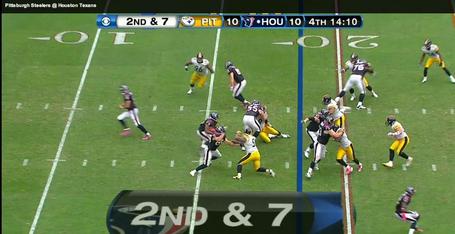 With Woodley closing off the hole, and Smith literally covering (sprawled out on the ground) the cut-back angle, Foster has nowhere to go.

Looking for an avenue of escape, Foster chooses to cut all the way back to the left side, and gets caught up (no tripping, right?) in Smith's legs. By this point, Harrison and Hampton have both shed their blocks, and Woodley is in pursuit. Smith gets credit for the tackle, and Harrison lands on him for maybe a half a yard gain when he finished sliding. 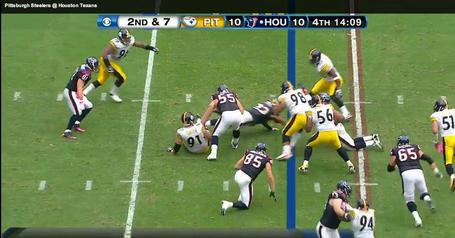 Timmons pursued the play nicely as well, as is his role on those kinds of runs. If he can occupy a blocker while cutting off the outside, either the safety or the other pursuing linebacker is free to make the play in the hole. It wasn't necessary on this play because Smith and Woodley had dominated their assignments.

It was tough sledding for the Steelers run defense at the start of this game, but disciplined run defense did show up. The end result was a failing grade for Pittsburgh, but plays like this show they're still certainly capable of the dominant run defense of the past few years.