Steelers Rashard Mendenhall: Dancing Too Much? Not So Fast!

Share All sharing options for: Steelers Rashard Mendenhall: Dancing Too Much? Not So Fast!

After coming off a career year, many Steelers fans were giddy to see Rashard Mendenhall improve upon those numbers.  In 2010, he ran for 1273 yards on 324 rushes for an average of 3.9 per pop.  Most impressive was his staggering 13 touchdowns.  In the preseason, I recall several people gushing about how much faster and tougher Rashard looked.  Certainly, this season would be another good one, right?

So far this year, things for Mendenhall have been rough.  He is averaging just 3.0 yards per carry for and a miserable 43.3 yards per game.  As far as starting RBs go, that 3.0 is only better than Titans RB Chris Johnson (2.9).  Ouch.  The argument before this game was that the offensive line just was not opening holes up for him.  I saw with my own eyes a few times where he was hit in the backfield before taking two steps with the ball.  Clearly, he is frustrated.  The question is, is his frustration causing him to try to do too much?  Would his numbers look better if he squared up and hit the hole with authority?  It cannot be completely the OL when both Isaac Redman and Mewelde Moore had solid days with YPCs above 6.5, can it?  Let's take a look at all 9 of Rashard's carries and find the culprit.

After a defensive offsides the Steelers get a short first down.  They set up with Rashard in the backfield, Ben directly behind center, two out wide left, and a 6 man line with David Johnson and Heath Miller bolstering the strong side to the right.  Ben calls Ward in motion and he ends up just outside the right side of the line.  Mike Wallace's presence on the left pushes one safety deep and the other sneaks toward the line after Ward motions.  Johnson, Heath, and Ward all set the edge. 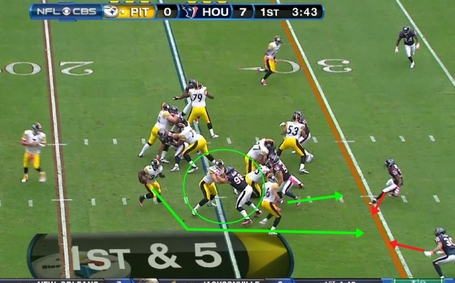 Result: Mendenhall gets a nice sweep to the right for 6 yards.  Great execution by the OL and no dancing by Mendenhall.

The offensive alignment is very similar to the first set, except Wallace is in tight on the left side and Ward is just off the line behind him.  Again Ward is motioned to the outside of the right line.  Somehow both Guards, Chris Kemoeatu and Ramon Foster, end up blocking the same guy.  The defender pushes both of them into the backfield. Kemo then releases the block to put him self directly in Rashard's lane.  Mendenhall runs into Kemo and loses all of his momentum and Kemo falls over, useless.  To me, it looks like the run was supposed to go between the C and RG, where there is definitely a hole. 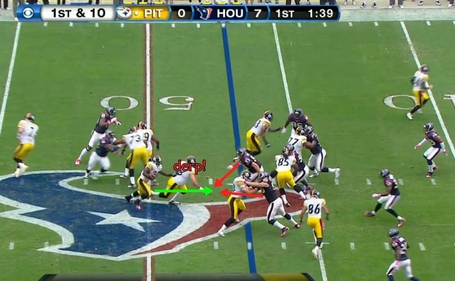 Result: Mendenhall is forced to go outside the line to the right.  Heath Miller had sealed his guy to the outside, so when the run goes that way the defender makes an easy play and the run goes for no gain.  Fault goes to Kemo here.

Same formation as the first run and the same motion by Ward.  Judging by the blocks it looks like a play designed to go outside to the right.  Marcus Gilbert gets beaten bad, but Mendenhall is already headed outside at that point. The blocks on the outside are there, but the cornerback on the outside stays home and goes unblocked. 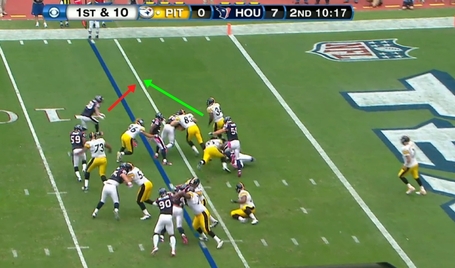 Result: Mendenhall is stopped for a 1 yard loss by the outside CB.  In my opinion, two things went wrong here. First, Ward probably should have sealed the outside, but instead goes inside of Miller, leaving the outside CB untouched. Secondly, Rashard hesitates (or makes bad double cut, whatever you want to call it).  However, even without a hesitation this ends up being only a 1 yard gain, at most.

Finally, a different formation.  This time Johnson is line up as a "FB" to the right with Mendenhall deep behind him. Miller is tight on the right side of the line and there is no motion.  Obviously, this play is going to that side.  Johnson does a spectacular job sealing the outside and taking both the strong side LBs out of the play. 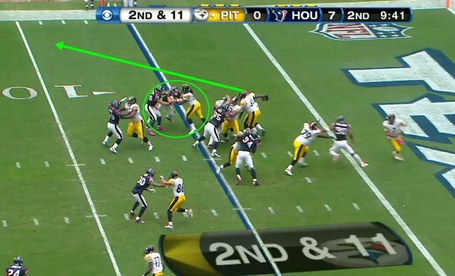 Result: Mendy gets outside for a 9 yard gain, which was set up by great blocking by both TEs.  Mendy also gets about 2-3 extra yards by running over the free safety.

The Steelers are lined up in the same formation as the 4th run.  This time, however, the play is designed to go between the RT and the strong side TE.  Pouncey, Foster, and Gilbert do a great job pushing the DL to the left and the two strong side TEs lock up their blocks to create a hole for Rashard.  Lastly, Kemo runs pull block and seals off the last defender coming through the hole. 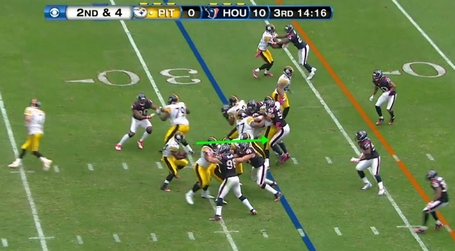 Result: Mendenhall wastes no time and blasts through the small hole for a gain of 4 and a first down.  Great blocking again and no hesitation by Mendenhall.  At this point he has 18 yards on 5 carries.

The formation for this run is similar to the first few runs, except the strong side is on the left and the WRs are on the right.  Miller motions across the line before the snap to make an evenly-balanced line of 7 players.  Kemo runs another pull, but never finds a defender to block.  Heath Miller is over-powered in his block and loses ground.  It appears that the run is supposed to go between the RT and Heath, but the hole doesn't develop when Miller loses his block and Kemo just takes a nice jog through the hole.  Gilbert and Foster double team and push a defender completely out of the hole, and then Gilbert leaves Foster to block at the second level.  For some odd reason, Pouncey releases the NT to help Essex and the NT ends up in on the tackle. 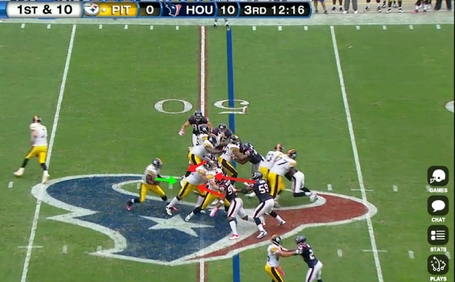 Result: The play is stuffed for no gain.  I blame this one on Pouncey for releasing a defender closer to the ball to help where it was not needed, on Kemo for not finding the guy Pouncey released (or anyone for that matter), and Miller for getting pushed off his block.  No fault to Mendenhall who is hit before he gets to the line.

The Steelers are initially lined up with 8 on the line, before Johnson goes in motion to line up as a FB on the left. Weslye Saunders is in on the left side of the line and Heath is on the right.  Wallace is in as the only WR and is out wide right.  Again, Kemo pulls around the back of the line to the opposite side and Johnson follows him into the hole, which has developed between the RT and Heath.  Gilbert and Foster again get good blocks to force their side of the line to the left.  Miller does enough to remove his guy from the play, but his block is not solid.  Kemo makes a great block as the first lead blocker, and then Johnson flies through the hole and falls, but subsequently ends up making a fluke block.  Gilbert loses his man who comes and makes the tackle.  If he had held his block, Mendy probably gains a few more but trips over Johnson. 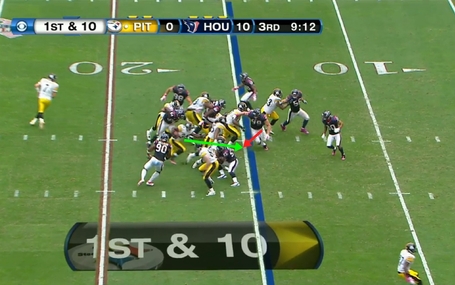 Result: 4 yard gain, which should have been more.  Gilbert needed to hold his block for half a second more and Johnson should have stayed on his feet.  The Steelers were on the Houston 15 at this point and this play could have been a TD.  Again, no dancing by Mendenhall who cut straight up the hole.

Let me preface this one, by saying I am not a fan of the call. 2nd and 6 in the RZ and the team has yet to string together solid back-to-back runs.  I would rather have seen a quick screen here, but I digress.  I love the I-formation and that is what the Steelers go with here.  Again, Johnson is in as the FB, Heath is strong side right, and Wallace and Ward are on the left.  Before the snap, Ward motions across the line and the ball is snapped as he faces front behind Gilbert.  To me, it looks like the hole is supposed to be between the LG and C, but it never forms. Both Miller and Ward leave the strong side LB unblocked and he comes across and makes the play.  None of the guys on the left lose their blocks, but none of them technically win.  If the strong side LB had been blocked, this might have picked up a few yards as it appeared Pouncey and Essex were starting to push the pile forward. 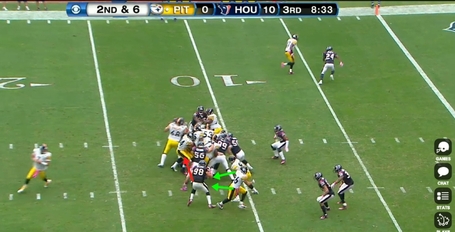 Result: Mendenhall is tackled at the LOS by an untouched defender.  Rashard hesitates, but he is waiting for Johnson to create a hole, which does not happen.  Mendy then crashes into the back of the line before being tackled.  No gain.  There might have been a chance to bounce it outside, but Kemo was pushed back and eliminated that chance.  I blame Ward and Miller as well as the left side of the line for not creating a hole.

This is the touchdown run and the Steelers have their bunch to the right side of the line with Ward at the top, Miller on the right, and Johnson in the back.  Wallace is out wide left.  The play is a pitch right and Ward and Miller make fantastic blocks to seal the edge of the line.  Both Gilbert and Foster pull behind Johnson to lead block for Mendenhall (fantastic design and execution by the way).  Johnson gets out front and makes a block to give Mendy the lane to spurt into the endzone. 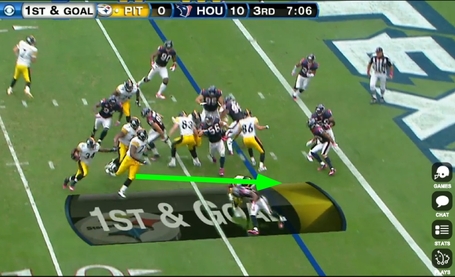 From what I can see, Mendenhall only hesitated or "danced" one time in the entire game.  That was on the sweep and the hesitation really had no effect on the outcome.  A lot of Mendenhall's problems came from missed assignments and solid penetration by the Texans DL.  Also, maybe the formations and play designs could be a little bit more diverse.  Sometimes a well-disguised play can be just as effective as a well-designed play.