Sunday's 25-17 win over New England showed tremendous growth and maturity within Pittsburgh's secondary. Especially considering how badly Patriots QB Tom Brady beat them up and down the field in their previous meeting, the relative lack of offensive production by New England's high-powered offense was impressive.

There was a play in 2010, set up very similarly to a play in 2011, that highlighted the differences between this year and last year.

It's no secret the Patriots shredded the Steelers in the air in their Week 10 game in 2010. The Steelers struggled to get any pressure on QB Tom Brady, and their coverage was not tight enough, both in design and in execution.

The Patriots had the ball on a 3rd-and-9 at the Steelers 18 yard line. Brady had basically been untouched up to that point. 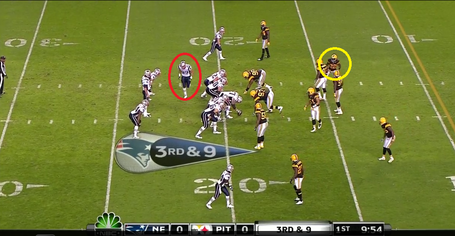 Before the snap, the Steelers show a man under coverage scheme, with the corners pressing at the line (man coverage) and two safeties back deep in zone. DE Ziggy Hood is down on the offensive left side, and former Steelers DL Nick Eason is playing the nose tackle.

Ryan Clark and Troy Polamalu are the deep safeties, with Ike Taylor and Bryant McFadden covering the outside, and Gay (in yellow) following Gronkowski (in red), who motions from left to right.

James Farrior, Lawrence Timmons, James Harrison and LaMarr Woodley are even-gap distance from each other behind Hood and Eason. 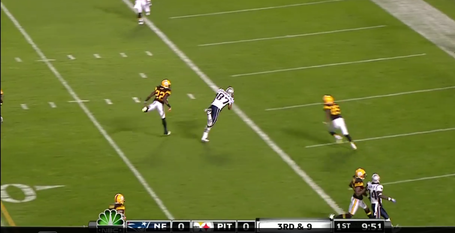 Farrior shows blitz, which gets Brady to change his protection scheme. Farrior isn't blitzing, but rather, picking up RB Danny Woodhead, who runs out to the right side upon the snap. Harrison drops into a deep middle zone, Timmons picks up RB BenJarvis Green-Ellis and Woodley, Hood and Eason rush the passer.

They fail to provide any pressure, and Brady has time to see Gay is underneath the much bigger Gronkowski, expecting deep help from Clark. Brady fires a bullet, over Harrison away from Gay and in front of Clark, perfectly into Gronkowski's hands in the end zone.

A great throw, but the gap in the zone created due to the short field and a large target, combined with the lack of pass rush gave Brady a pretty simple read.

Flash ahead to 2011. The Patriots have another 3rd-and-9, but are at their own 20. The Steelers line up uncharacteristically with nine players within four yards of the line of scrimmage, and two deep safeties, Clark and Polamalu, 15 yards off the ball.

They ran a similar Cover 2 man under look on Gronkowski's touchdown, but they're playing far more aggressively, showing much more faith in their defensive backs; their cornerbacks in particular. Ike Taylor and rookie Cortez Allen are in the slot, covering Welker and Gronkowski, respectively. Gay and Lewis are covering the outside receivers. 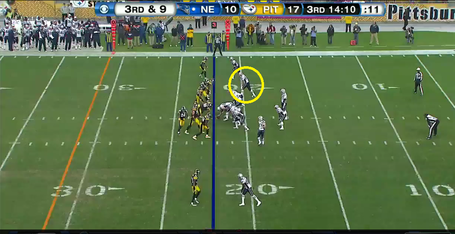 Hood is down in a three-point stance, with Keisel, Woodley, Timmons and Larry Foote hovering around the line, standing up.

The Patriots have four receivers, including Gronkowski in the right slot (yellow).

Brady calls for motion, similarly to what he did last year. He recognizes man coverage, like he did last year, and sees a potential overload from Timmons and Foote to his right.

Brady misdiagnoses the play, as does the offensive line. Because of that, he feels he'll have time to get Gronkowski on a skinny post ahead of the rookie cornerback. 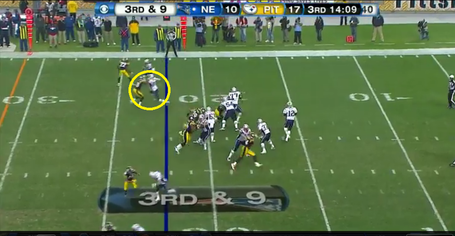 This time, instead of Farrior showing blitz, Keisel disguises it, and at the snap, stunts around Hood, who crashes to the right. Allen jams Gronkowski (yellow), eliminating the inside route he ran on Gay last year. With an option, Gronkowski cuts hard to the outside, but Brady is pressured by Keisel, eliminating a throwing lane where he could have gotten the ball ahead of Gronkowski enough where he could have gotten to the first down marker. 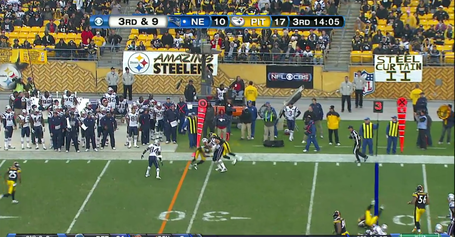 Instead, Brady is forced to step up in the pocket, Allen has time to recover, and although the pass is completed, Gronkowski has nowhere to go, and is brought down by Allen and Gay.

It was an excellent play call that was perfectly executed. From a larger perspective, though, it shows the amount of improvement in the Steelers pass coverage, and the amount of confidence head coach Mike Tomlin and defensive coordinator Dick Lebeau have in them as a unit.