Texans Duane Brown Should Be Fined

Share All sharing options for: Texans Duane Brown Should Be Fined

It'd be easy to say it's ironic that Steelers OLB James Harrison's injury, which will likely cost him several weeks of the 2011 season, was caused by a helmet-to-helmet hit, considering the amount of fines he picked up for league-interpreted hits last season.

It wouldn't be ironic. But it would be true.

Texans LT Duane Brown - who is a full four inches taller - hit Harrison in the forehead area of his helmet with the crown of his own helmet on a screen pass in the second quarter of Houston's 17-10 win over Pittsburgh in Week 4.

It wasn't a dirty hit.

Let me type that again. It was not a dirty hit. Duane Brown played an excellent game and is a member of the most underrated offensive line in the league.

But it was, according to the rules, an illegal hit. Rule 12 (player conduct), Section 2 (personal fouls) Article 8 (Unnecessary roughness) Paragraph g in the NFL rulebook states:

g. If a player uses any part of his helmet (including the top/crown and forehead/"hairline" parts) or
facemask to butt, spear, or ram an opponent violently or unnecessarily.

Despite any prior fines to Harrison or the Steelers, visual evidence strongly suggests Brown used the "top/crown" portion of his helmet to strike Harrison "violently."

First, Brown has his helmet down in a "ram"ming position. 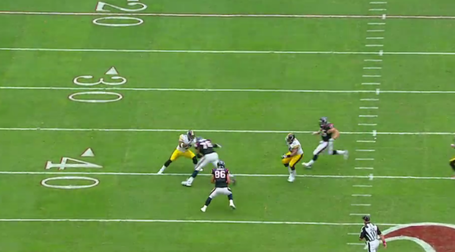 And he ends up hitting Harrison with the crown of his helmet.

The issue here is whether Brown, an offensive player, will be the recipient of a rare fine on an offensive lineman for such an act. It's a bit one-sided to claim incidental contact, too, considering the amount of fines given to defensive players for helmet-to-helmet infractions.

He shouldn't be fined because of the injury Harrison suffered on the play. He should be fined because the rule book states clearly what he did was illegal, and considering the amount of fines levied on defensive players for the same thing, it would show some consistency in an otherwise inconsistent administration.

The only significant difference between most other helmet-to-helmet hits we've seen and this one is simple; the offensive player initiated this hit. The league either needs to simply state what we've all been assuming - offensive players are far more important than defensive players - or they're going to need to continue fumbling around and re-tooling the game at the detriment of the players and the fans.

There's also a sense of frustration for the Steelers players. They just lost one of their top defensive players before a critically important game at the same time his back-up is likely out too. They lose $15,000 for horse collar tackles, shouldn't they at least see some kind of acknowledgement from the league it will call it equal, or as Al Czervik says,"keep it fair, keep it fair?"

I am not calling Brown's hit dirty, but the fact is he violated the letter of the rule. Since I cannot find Goodell's "spirit of the rule" book, I'm assuming a reasonably minded person will take this by the letter. Brown led with his head down. He hit an opposing player in the helmet with his own helmet.

If Brown does not get fined for it, the league is concretely stating defensive players don't matter.

Too bad the Steelers are a defensive team. It's not like they've been catching a break with the regulatory-happy leadership that's infected this league over the last five seasons. Goodell didn't go out of his way to help the Steelers convince a star offensive player to play there.

I am not in favor of fines. I think the flagless version of Flag Football Goodell has turned this game into is becoming a sham. But the fact of the matter is a rule of violated, and nowhere in the rule book bearing Goodell's name does it suggest helmet-to-helmet infractions are only to be called on the defensive player.

It's up to the league to decide if they want to follow through on their initiative to make a dangerously violent game safer, and make everyone (except the quarterbacks, of course) play by the same rules, or if they want to announce clearly their only intention in the anti-physicality campaign is to protect their offensive players.

Don't agree? Ask yourself this, if James Harrison hit Duane Brown the same way, would he be fined?