Steelers vs. Titans: Five Players to Watch in Pittsburgh's Game Against Tennessee

Share All sharing options for: Steelers vs. Titans: Five Players to Watch in Pittsburgh's Game Against Tennessee

'Five Players to Watch' is back! Last week, I followed the Steelers' example and took my mulligan of the season for personal reasons. Now, also like the our beloved team, I am ready to bounce back with a strong performance. But enough about me, our team from Pittsburgh needs the support more than I do. A less-than-convincing win against the Colts was followed last Sunday with an even less convincing loss against the promising Houston Texans, prompting many on this site to throw their hands into the air in anticipation of falling skies.

But, as others here have been just as quick to point out, the NFL season isn't over. Only a quarter of games have been played, and theoretically, even a 14-2 record at the end of the season is not yet out of the realm of possibilities. Still, to convince both their fans and themselves, the Steelers have to righten the ship when the suddenly-dangerous Tennessee Titans come to Heinz Field in a couple of days.

Aaah, yes, the Titans. It seems like decades ago that this young team, led by 'Smash and Dash' running backs Chris Johnson and LenDale White, was the new media darling and crushed Pittsburgh toward the end of the 2008 season. The Steelers of course went on to win the Super Bowl that year, while the Titans lost to the Ravens in the playoffs and followed up their promise with two years of mediocrity. But in 2011, Tennessee is back with a 3-1 start , led by an aging Matt Hasselbeck that wants to prove he is not done yet and a hungry, opportunistic defense. For Pittsburgh to show the world that they still have to be reckoned with, these 'Five Players to Watch' will have to perform above the line on Sunday. 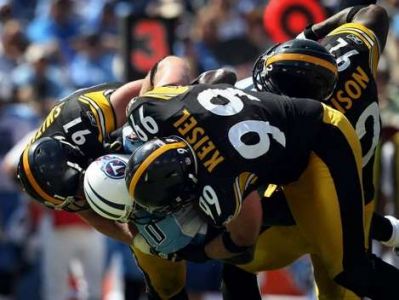 The beard is back! Steeler Nation actually got some good news this week when Brett Keisel announced that he would be back from his PCL injury sustained in the season opener and ready to play this week. The news was especially welcomed considering fellow defensive end Aaron Smith was once again injured in last week's loss to the Titans. Smith's injury combines with Keisel's return to ensure the reunion of 'The Diesel' and Ziggy Hood, who started six games in the latter half of 2010 to help Pittsburgh achieve historic success in terms of run defense.

But as good as the Steelers defense was last year in stopping the run, as futile their efforts have been this year. Pittsburgh ranks 22nd in the league in rushing yards allowed per game, an uncharacteristic spot for a team that year after year finishes in the top five. And unlike years past, the defensive line has been part of the problem rather than the solution. Too often in this young season have we seen defensive linemen on their backs, a position not quite ideal for filling holes and occupying blockers. Now, an elite running back comes to town in Chris Johnson that could once again put up a stiff test for the defensive line. The shifty Johnson has been off to a slow start this season, but should never be counted out as he rushes behind a strong offensive line and is a threat to score a touchdown from anywhere on the field. Keisel coming back without having missed a beat could go a long way toward ensuring that Steelers fans won't be in for a long afternoon. 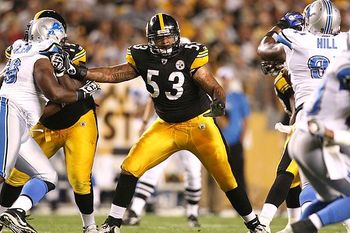 The struggles along the offensive line have been elaborated on to exhaustion, and I won't go into much detail on their performance as a whole. Each member of the line will have to step up their game for the rest of the season to ensure that once September comes around, we still have a healthy quarterback or running back on the roster. But am I the only one that has been disappointed with the early season play of Maurkice Pouncey? After an all-pro rookie season, the young center seems to be having somewhat of a letdown year.

Don't get me wrong, Pouncey is a beast. I still believe that he will shore up the offensive line for years, and has all the necessary ingredients to be a leader on this football team for the next decade. But if the general rule is that linemen are at their best when not being noticed, Pouncey has not been doing very well in 2011. He has picked up a variety of penalties, including an extremely costly personal foul against Houston that negated a Mewelde Moore first down run and likely cost the Steelers seven points. He also has failed to pick up inside blitzes, an issue that could be blamed on a lack of trust with his constantly changing line mates. And sure, many of his mistakes may be amplified because of the lack of talent on the offensive line. But if Pouncey wants to be a leader, he will need to step up. In short, he needs to have a dominating game against a strong Titans offensive line that has only given up 87 rushing yards per game with an average of 3.2 yards per carry, tied for second in the NFL. 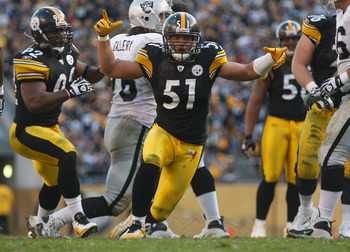 Oh boy... Here we go. Has any defensive player been more criticized for his play this year than James Farrior? And not necessarily undeserved criticism, I might add. Farrior, signal caller and theoretical extension of defensive coordinator Dick LeBeau's intellectual brilliance on the field, has not had a good start to 2011. During the first four games, he has been inactive in the pass rush, out of position in run defense, and too slow when dropping into coverage. A staple in the middle of the Pittsburgh defense for almost a decade, James Farrior looks to be nearing the end of his road.

Unfortunately, his shortcomings may be amplified against the Titans. With Lawrence Timmons moving to the outside replacing James Harrison, Farrior's colleague on the inside will be Larry Foote who is not any faster or more mobile than the Steelers' defensive captain. Foote has replaced Farrior on a surprising amount of plays early in the season, but this insurance policy will no longer be possible. Unless LeBeau and head coach Mike Tomlin plan on giving Stevenson Sylvester more playing time than expected, Farrior will be asked to shave off a couple of years and play like the pro-bowl defensive stalwart he used to be and maybe still can be. His duties will include covering star running back Chris Johnson and pass-catching tight ends Jared Cook and Craig Stevens, who have combined for 324 yards in the first four games. As the center of the Steelers defense, Farrior will need to turn in a big game in order to turn around his fortunes and allow Pittsburgh to come away with a win. 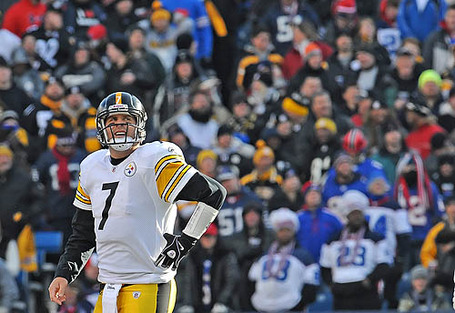 Despite his team's underwhelming offensive performance to begin the season, you have to feel for Ben Roethlisberger, who just can't seem to catch a break with injuries. Sure, he deserves part of the blame because of his tendencies to hold on to the ball, but Roethlisberger has been knocked around all season. We were all holding our collective breaths a few weeks ago, when he laid motionless on the Heinz Field grass after a hit to his knees against Seattle. Then came news this week that another low hit by Texans defender J.J. Watt led to Ben leaving the stadium in a boot, and the cursing of our offensive line reached new heights.

But if there's one admirable attribute about Ben, it's his toughness. We as Steeler fans have seen him play through almost any injury imaginable, from a broken foot to a broken nose. He'll have to do it again this Sunday, in a game that will require his offense to step up more than it has before. The Titans have shown their ability to score with the best of teams this season, and have the potential for an extremely balanced and lethal attack through the air and on the ground. At the same time, their defense only allows 14 points per game. If players like Farrior and Keisel are unable to come up big, it might be on Roethlisberger and his offense to shoulder the responsibility and win the game for their defense. And he will once again have to do it behind a make-shift offensive line, while likely not being able to rely on two of his top three running backs. At the same time, a small storm seems to be brewing in the background with Hines Ward, who recently stated that he is open enough to get more balls thrown his way and that the reason of his ineffectiveness this year has nothing to do with him. Ben, metal plate in his foot and all, will have a big task ahead of him against the Titans. 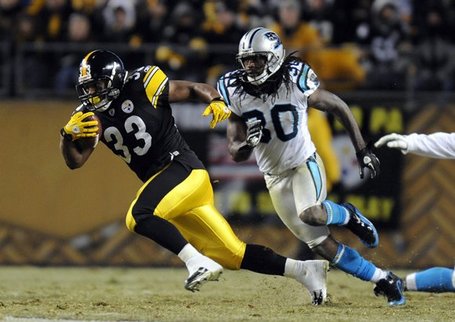 As macabre as it sounds, there might be a silver lining behind some of the injuries this season. Rashard Mendenhall, who has been criticized lately for his indecisiveness, missed practice all week and is likely to sit out against the Titans on Sunday. With Mewelde Moore also sidelined due to injury, there is a distinct chance that we could finally see Isaac Redman get his chance of being the Pittsburgh Steelers' featured running back. The 2009 undrafted free agent, in his third year with the Steelers, has been spelling Mendenhall periodically this season and has done so with significant success. Even behind a questionable offensive line, Redman is averaging 4.9 yards per carry.

Of course, we all know Redman as a local legend, the fan favorite who went from a running joke to a legitimate NFL player whose powerful runs have endeared him to fans and media alike. And whether he gets the start against Tennessee or not, his performance on the field could very well be the key to a Steelers win. He has the chance to improve a major weakness of this young season almost by himself, attempting to revitalize a running game that ranks only 21st in the league with under 100 yards per game. The Tennessee defense, which has excelled in stopping the run during the first four games despite facing the likes of Ray Rice and Maurice Jones-Drew, will provide a formidable test for his abilities to hit the hole hard and break tackles. If he gets the start, becoming the first Steelers rusher this season to eclipse 100 yards would help tremendously. But even if Mendenhall can make it onto the field, spelling his injury becomes even more important than in previous weeks. If Redman can be the Chuck Norris-like savior we all know he is capable of being, we will all be able to breathe a little easier after Sunday.

Due to the plethora of injuries, leaving people out of 'Five Players to Watch' was even more difficult this week than it has been previously. Lawrence Timmons will replace James Harrison at right outside linebacker, and his transition will be interesting to watch. Max Starks may get his first start at left tackle after being signed just a few days ago. Keenan Lewis and William Gay have played surprisingly well, and have been a major reason why Pittsburgh's pass defense hasn't been a weakness this year. Finally, Antonio Brown continues to confuse me as he follows up missed hot reads with exciting, potentially game-changing plays. Who are your 'Five Players to Watch' this week?