Play Of The Game: Foote, Woodley, Coverage Highlight One Of Many Failed Patriots Third Downs

Share All sharing options for: Play Of The Game: Foote, Woodley, Coverage Highlight One Of Many Failed Patriots Third Downs

The offense may have gotten the headlines for their performance in Pittsburgh's 25-17 win over New England, but the defense underwent a makeover of its own.

The Steelers played much more man defense than they have in recent games - and recent years - and the result was a befuddled opposing offense that gained just 213 yards and was 3-for-10 on third downs.

One of those failed third downs is Week 8's Play of the Game.

New England has the ball on 3rd-and-15 on Pittsburgh's 47 yard line with 10:55 to play in the second quarter. Patriots QB Tom Brady has his offense moving, but most of their gains have come off Steelers penalties - a pass interference call on CB William Gay and a holding call on LB Larry Foote extended the drive more than Brady completions.

Without any Steelers penalties, the Patriots stalled on their next two plays, two consecutive incompletions (Woodley begins to show the mismatch existing between himself and RT Sebastian Vollmer) and a false start by Logan Mankins backed the Patriots up, and forced them to face the dreaded 3rd-and-long.

Pittsburgh's defense had been tough up to this point in coverage, and Woodley was just starting to get hot. He was winning his individual battle, but the team hadn't yet combined for a big defensive play.

That would change in a few seconds.

The Patriots are in a shotgun formation with five receivers - WR Chad Ochocinco is on the line split wide to Brady's left. TE Aaron Hernandez is slot left off the line. After five down linemen, the Patriots put trips on the right side, with TE Rob Gronkowski and WR Wes Welker inside off the line, and WR Deion Branch wide right on the line.

The Steelers are countering New England's five receiver set with six defensive backs - "dime" - and only one down lineman - Ziggy Hood. DE Brett Keisel is standing up over the left guard, and is moving around presnap. OLB LaMarr Woodley is standing up one gap to Hood's left, on the outside shoulder of Vollmer. SS Troy Polamalu is on the line, across from Gronkowski. CB Ike Taylor is to his left, over Welker, and CB William Gay is two yards off the ball, in front of Branch.

CB Keenan Lewis is on Ochocinco, about two yards off the ball on the offensive left side. LB Lawrence Timmons is showing man coverage on Hernandez. LB Larry Foote is over the center, and S Ryan Mundy inches up a little before the snap, but drops into a deep Cover 2 zone when the ball is snapped. S Ryan Clark is covering the other half opposite Mundy. 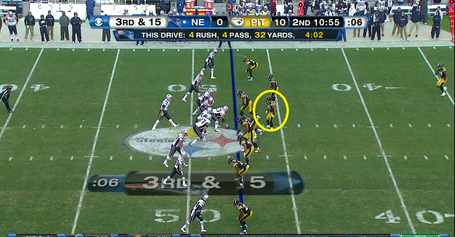 The Steelers are in a very aggressive formation, considering the down and distance, but still have two deep defenders. With the other nine defenders within two yards of the ball, the Steelers are showing a strong middle blitz. Brady recognizes this, and points to Foote (yellow), indicating the likelihood he will be coming on a middle blitz.

With the Steelers clearly showing man coverage, Brady hopes to get enough protection up front to complete a pass deeper down the field, and have the receiver run for a first down. In a shorter distance or earlier down, he would simply audible to a slant or a screen, which would be very difficult to defend with this kind of formation. The Steelers are taking advantage of the distance, and betting their pass rush will hit home before New England's receivers can exploit any openings.

The Patriots offensive line fails to recognize the second layer of the blitz, which will be Woodley's delayed stunt over the center, and the impact of Foote's block on C Dan Connolly. 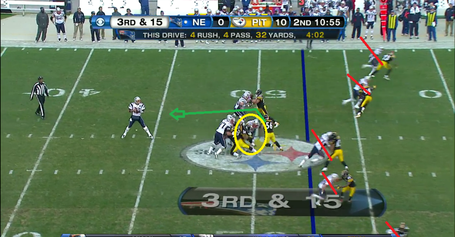 Foote slams down on Connolly (yellow circle), who misses Woodley's stunt from the outside to the inside (green). The Patriots have five receivers in their patterns, and no protection in the backfield.

Woodley gets by Connolly, who's unaware the Steelers best pass rusher just went through his gap.

Brady takes a seven-step drop, and looks for an open receiver. Because the Steelers are playing an aggressive man coverage defense, all five receivers are jammed at or near the line of scrimmage, and none of them have gotten into their routes yet. Brady is set to throw, but has no options (red).

The blanketing Steelers coverage is not what Brady is used to seeing. Middle blitzes (most commonly run as a "cross fire," which is Foote slamming the center, and ILB James Farrior stunting around him) aren't rare for the Steelers, but the man coverage they're using to bolster it is. Brady has made a career on standing in the pocket and delivering excellent passes to the receiver in the soft spot of the zone. He has no option here but to buy himself some time, and wait for a receiver to break open.

Woodley, though, won't allow that to happen. 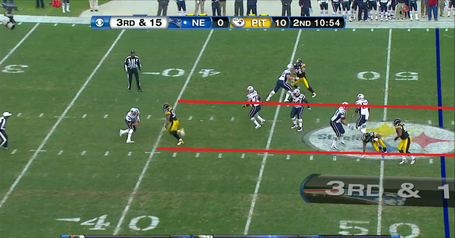 Brady is about 15 yards behind the line of scrimmage, moving to his left to try to avoid Woodley. Brady isn't close to quick enough to avoid a player like Woodley without any help. Woodley further cements the death of the play by staying very balanced in his pursuit, cutting off Brady's escape to either side by running straight at him.

The play is destroyed, and the only thing Brady could do would be to get outside the tackle box (red, approximate estimate) and get rid of the ball. 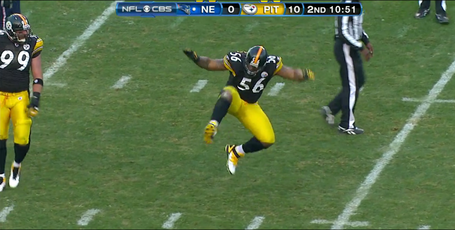 The pressure the Steelers were able to get up the middle was a huge advantage through the first three quarters of the game. They had little pass rush after Woodley went out, but the scheme was creative enough that New England's talented offensive line missed a few key blocks, and led to busted plays.